Davide and I were both in attendance at the London 3D Printshow last week, and yes, this overview is way late — sorry about that. For me it was 60 hours — give or take — minus sleep (about 10 hours in total) crammed full of 3D printing activity, productivity, insight, revelations and gossip. As the hours stretched and sleep deprivation kicked in, I may have been guilty of babbling and hiding out with some good 3DP friends for a few brief minutes.

It would be infinitely difficult to cram everything into this review so I will try really REALLY hard to limit myself to the highlights. However, that is not to negate anyone that was there, or anything that I saw — as ever it was a fascinating show bringing together a great many of the eye-catching 3D printing applications from the past year. Kerry Hogarth’s talent in producing this consumer focused 3D printing event was once again in evidence. She’s like a force of nature, and her confidence was further elevated following the recent investment partnership with Tarsus Group, who had senior representatives present in London, a couple of who were somewhere between astounded by and in awe of what they were seeing and the community they have embraced.

One of the two show sponsors was Adobe, who kicked of the presentation programme and set the tone for the show — with a heavy emphasis on design, art, fashion and a myriad of other eye-catching 3D printed “things” — if you’re looking for functional, commercial or industrial 3D printing for manufacturing or engineering disciplines — this is likely not the show for you.

It’s hard to keep up with the direction(s) that this industry takes sometimes, and I’ve been doing it long enough, but it seems there is a real fracture right now — one reflected throughout manufacturing history — between engineering and design disciplines. Talking to visitors and exhibitors, which included artists, OEMs, 3D printer distributors, students at the door waiting to get in and the odd distressed engineer, this issue came up over and over and over again. The engineers were clearly well out of their comfort zone, while everyone else was exactly where they wanted to be.

I won’t recount all of the conversations here, but I think the greatest clarity I got was from Andy Middleton, General Manager of Stratasys EMEA. After I pointed out “the fracture” his view was enlightening in that he validated both of these markets when it came to 3D printing. They are both key markets for Stratasys but “require very different approaches — different technology, different materials and VERY different marketing messages.” Basically the qualities that matter greatly to designers and artists are the finish, the colours and the textures — essentially the stuff that most engineers don’t give a toss about, rather they need to know that the platforms they use will produce a part that works and demonstrates the functionality that they require. It’s an age old dichotomy, one that will likely never be eradicated, but they are both valid and when it comes to 3D printing, both flourishing and innovating.

Hence, Stratasys also took on a sponsorship role at the 3D Printshow. The company works with many creatives to demonstrate the capabilities of its 3D printing platform range. It also works with high engineering companies for prototyping and production. The Strakka Racing car was on show to prove it and demonstrated one area where high engineering and consumer interest does converge

And just before I move on from Stratasys, one very interesting snippet I did manage to extract from Mr Middleton was when I asked about Stratasys and metal. I always ask Stratasys about metals when I get an opportunity, but never really get anywhere. This time, however, it went a little differently. Andy told me that: “we are already the largest supplier of metal end user parts following the acquisition of Solid Concepts and Harvest Tech.” I acknowledged that yes, it’s there or there abouts, but that is not quite the same as having proprietary metal tech in house and was it on the cards? In a roundabout way, Andy left me in no doubt that Stratasys will be adding metal technology to its OEM portfolio, probably sooner rather than later. He said, carefully: “Stratasys will not rely on 3rd parties for its metal capacity for long.”

Going back to the design creativity and the artwork, these provided the central hub around which the rest of the show was built — there were some stunning works of art and spectacular fashion collections showcased across the gallery, unsurprisingly attracting a great deal of attention.

The 2014 Global Awards ceremony was also a fun affair. Taking place on the evening of the first day of the event, aside the River Thames at Old Billingsgate ensured it was informal and well-attended. The winners of the awards can be found here. 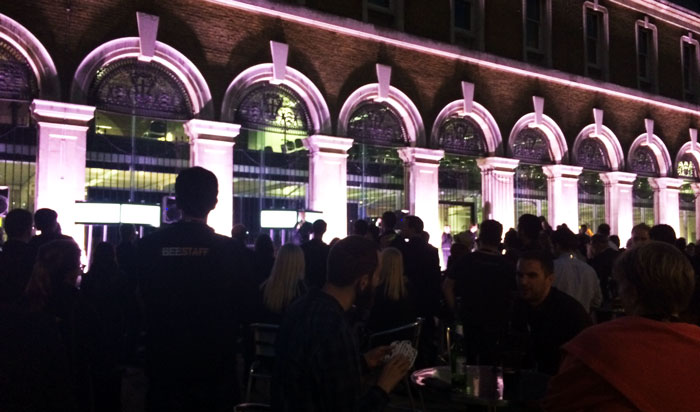 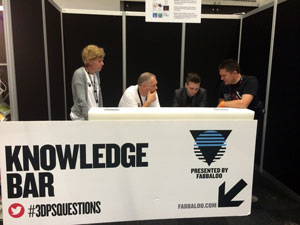 One of the genius additions to the show this year was the Knowledge Bar — a place where visitors could go to ask questions and find out more about 3D printing in general from technology independent experts. And the organizers ensured they had two of the best — Kerry Stevenson and Richard Horne.  I spent some time with the guys and they were generally impressed with the level of enquiries they were getting and suggesting that the knowledge base has moved on significantly, even from where it was last year. Although talking to Nick Allen at 3DPrintUK stand, which had on show a brilliant demo piece — a 3D printed buggy— it seems there are still some gaps in visitors’ understanding. When I asked how many people asked if the tyres were 3D printed, he raised his brow, laughed and said “too many!” 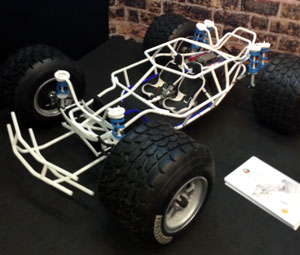 It was brilliant to catch up with Filemon from 3D Hubs. These guys are ramping up left, right and centre. With new announcements coming thick and fast, even during the show. I got a similar vibe from Sharebot who Davide, sharing their first language of Italian, has covered at length for 3DPI. And well deserved it is too. Their R&D and working prototypes of multiple 3D printing processes applied to desktop machines, certainly makes this company one to watch. One of the very interesting developments for the 2nd gen extrusion machine (not released yet) was the CAD to Print capability that they have built into the machine. Basically eliminating the Gcode/slicer et al software required for comparable machines. The Sharebot team has a SOH too.

Another big highlight, literally, was reconnecting with the BigRep team, after first having met them in Berlin. Thankfully no injuries this time. Progress has been swift and alongside the working first gen BigRep was the new version — fully enclosed and modular, with the capability to add a scanning device down the line. 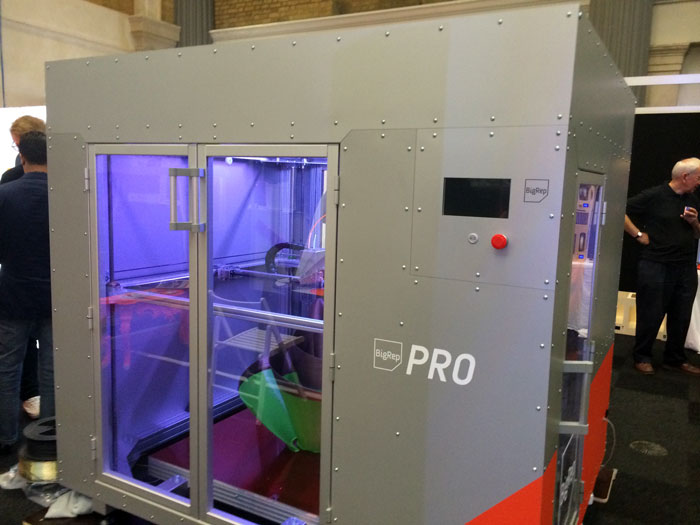 Personal highlights from a “me as a consumer” point of view were the 3D printed puzzles from the PuzzleShed — these guys caught on to the advantages of 3D printing a couple of years ago, and developed their own 3D printer to work the way they wanted it to work to produce the puzzles they wanted to design and make. They were getting some well-deserved attention and I have those puzzles in mind as Christmas presents for a few people.

Similarly the 3D printed figurines of My3DTwin. These are such high quality, truly representative 3D “photographs,” and with the ability to add the “hero” twist, they are definitely on my Christmas list. Interesting to hear about some of their plans, talking to Charlotte, too, including partnerships and initiatives for the future. 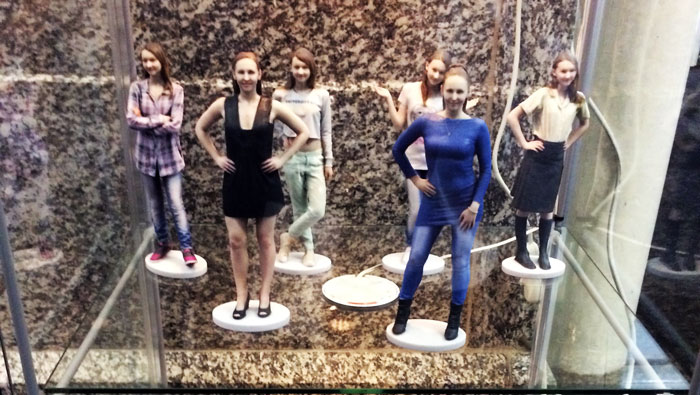 So, a packed few days in the capital resulting in complete 3D printing overload.

And for anyone on mainland Europe — don’t miss out on the Parisian edition. It’s heading your way next month.