Physical Retail is the New Frontier for 3D Printing

As I mentioned in the Blu-Bin article on Tuesday, retail outlets seem to be the next logical step for 3D printing organizations — and this is happening on two fronts: 3D printing systems and accessories and 3D printshops offering consumer services.

Last month saw Makerbot open it’s first physical store in New York city — the first general access retail outlet for consumers to browse and purchase 3D printers and their accessories. In the same week, Deezmaker, vendors of the Bukobot 3D printer opened a retail outlet in Pasadena, CA, USA — again with the focus being on sales of 3D printers and their consumbales. While it could be argued that with the opening dates being so close they may each have lost out on coverage, I personally think it worked in their favour — they are both pioneers of this concept and the rest will surely follow.

On the second front — 3D printing services on the highstreet, the number of retail doors opening to public is pointing to a burgeoning trend. The Color Company, with seven outlets in London, UK first introduced 3D printing to its service range back in August. The Color Company built its reputation offering repro and printing services in 2 dimensions, however it has now put itself at the cutting and moved into the third dimension — with 3D printers from Objet. Consumers can now walk in off the street, in London, with a 3D digital file and select their required material for 3D printing (from a choice of more than 100), and The Color Company can have the product ready for them within 24 hours.

Blu-Bin, in VT, USA is doing something similar, but with design support too. The focus is all on consumer desires.

And then there is 3D-Model.ch GmbH — which offers both. This retail outlet also had its grand opening in August and is located in the heart of Zurich’s creative district.

If the ultimate target market is the general consumer then 3D printing companies have to engage with them and draw them in. Trade Shows and fairs work up to a point. The world MakerFaire phenomenon, as witnessed in New York City this past weekend is a tribute to the growing interest of a much wider audience. And it allows consumers to get hands on with the systems and understand what they can do, but it is a hobbyist market — people that are keen and have some understanding of how things are made. Great opportunity to bring the kids and get them involved. As great as all that is – it is not going to get the technology in front of the general consumer on the street — but a shop probably will. It’s familiar territory and it is inviting.

I don’t know about you, but I see a trend developing — a fast moving one at that.

Ironically, Internet shopping is a vast growth area for many high street chains that are seeing footfall from consumers fall away in their stores, but for consumers of 3D printing I actually think it needs to work the other way around.  At least for the foreseeable future, because consumers need to understand and  make the connection with 3D printing. Getting tactile with systems and 3d printed products will draw them in to this exciting world of opportunities for customized consumer products much more quickly than pictures and videos on line.

Personally, in the medium term, I think it is 3D printshop services that will flourish exponentially — as they become a hub for localized manufacture at the grass roots level, without requiring the technical expertise that is needed to run a machine. Breadth and depth of services and materials offered will be key, but once it takes hold, I think it will be huge. For the systems vendors, there is still a huge untapped maker / hobbyist market and retail outlets will be beneficial, but I don’t think the tech is quite ready for the general consumer — yet! 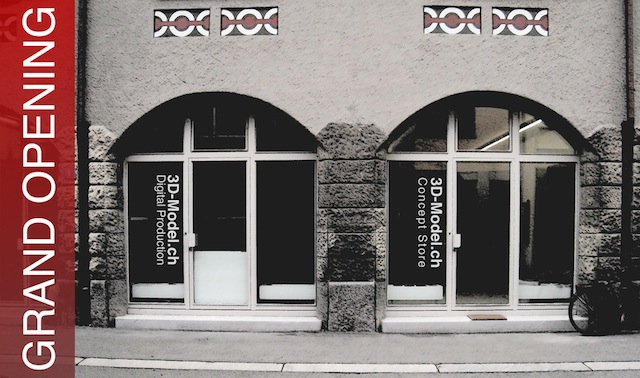 The 3D-Model.ch store in Zurich, Switzerland.