The BluePrinter 3D printer was first introduced to its audience, in the form of a prototype, at Euromold 2011. THE show for new launches in this sector, the audience was big and it caused quite a stir. As I reported on the Euromold event last year, and the many, many new 3D printers emerging on the market, among the cacophony, this one, by quite a long stretch, generated the most excitement.

This is because it is not just a new 3D printer in the mid range, it is a new process — well sort of. It is similar in nature to the laser sintering (LS) 3D printing process, which is one of the most robust processes for producing functional parts — it is the one everyone wants to use, but many can’t because it costs tens, if not, hundreds of thousands of pounds. The BluePrinter utilises selective heat sintering (SHS) and comes at a fraction of the cost of LS: €10,000 before December (introductory price) and €12,500 thereafter. The similarities are that it is a powder bed process, with the advantages that come with that, namely no supports are required as the powder in the bed acts as the support; and tough durable thermoplastic material. The difference is the heat source — rather than a laser the BluePrinter utilises a thermal printhead.

I caught up Niels Appel (CEO) and Torben Lange (CTO) at the TCT Show, where the company officially launched the machine. I saw some parts, which look good and were strong — they were straight off the machine which is even better, as minimal finishing processes are required. They were all white though, which is in line with the fact that at launch, the BluePrinter can process a single material — developed specifically by the team to work reliably with the SHS process. However materials development is a priority moving forward I was told. 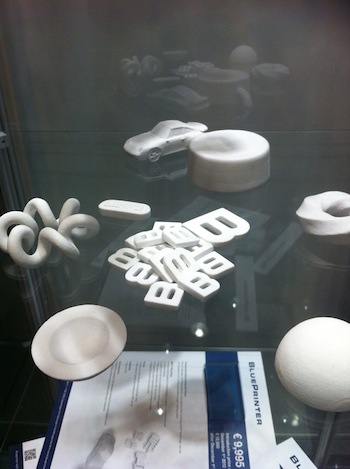 Other points of note are that the maximum build volume of this 3D printer is 160 x 200 x 140 mm, minimum build layer thickness is 0.1 mm with a build speed of 5-7mm per hour. The BluePrinter operates wholly from a web based interface (either Windows, Mac or Linux) and accepts STL file formats.

The first BluePrinter machines are scheduled for delivery January 2013.

We look forward to bringing you some application stories.