Openness with Quality Design: the 3D Designers on the Road to Freedom

The Advent of Open Design

Open design has gained significant traction in the last five years, following in the footsteps of open source software, open science and open technology. Jos de Mul defined openness as “a very general philosophical position from which some individuals and organizations operate, often highlighted by a decision-making process recognizing communal management by distributed stakeholders (users/producers/ contributors), rather than a centralized authority (owners, experts, boards of directors, etc.).” Ronen Kadushin, in his “Open Design Manifesto”, notes that, “in today’s market-driven culture, industrial designers commit themselves to producers in order to realize their creativity. Producers, with the power to control all aspects of a product, are the gatekeepers of design creativity, deciding what and how products are available to consumers. This situation begins in industrial design education systems that train designers to integrate into an industrial production scenario and accept that producers have the right to regulate design and indoctrinate their set of values and ends. Fresh approaches and radical views are marginalized as they do not conform with the dogmas of the Church of Industrial Design.”

Open Design as the Road to Freedom…

Ronen is optimistic of the capabilities of open design to “shift Industrial Design to become relevant in a globally networked information society”, as long the designer is always acknowledged as the original creator and owner of the design, even in case of a derivative design. The authors of Open Design Now very much share Ronen’s optimism. John Thackara, one of the contributors to Open Design Now, goes as far as stating that “openness, in short, is more than a commercial and cultural issue. It’s a survival issue. Systemic challenges such as climate change, or resource depletion — so-called ‘wicked problems’ — cannot be solved using the same techniques that caused them in the first place. Open research, open governance, and open design are a precondition for the continuous, collaborative, social mode of enquiry and action that are needed.”

In the same collective publication, Ronen details how open design can free the designers from the oppression of the Church of Industrial Design. “In Open Design, a design is digital information. It relies on the internet’s communication resources, to publish, distribute, and copy the designs. Designs can be produced by any CNC manufacturing facility that’s local to you, your consumers, or distributors, and encourage a direct contact with the designer. Open Design makes all technically conforming designs continuously available for production, in any number, with no tooling investment, anywhere and by anyone. Designs that typically live only a few years in the marketplace can live on and develop into new shapes and uses. Open Design places the designer at the center of an enterprise.”

Others more recently, like Garth Braithwaite in his convincing and well documented talk, are encouraging designers to open source and embrace the open design revolution on the road to freedom.

Not everyone shares the optimism that open design alone can free designers from the Church of Industrial Design. Some are pointing at the serious risks associated with open and (un)limited design and the advent of the Noosphere (the sphere of human thought). Risks are so high that they foresee serfdom from collective consciousness, a mega cloud far more powerful than an actual god. 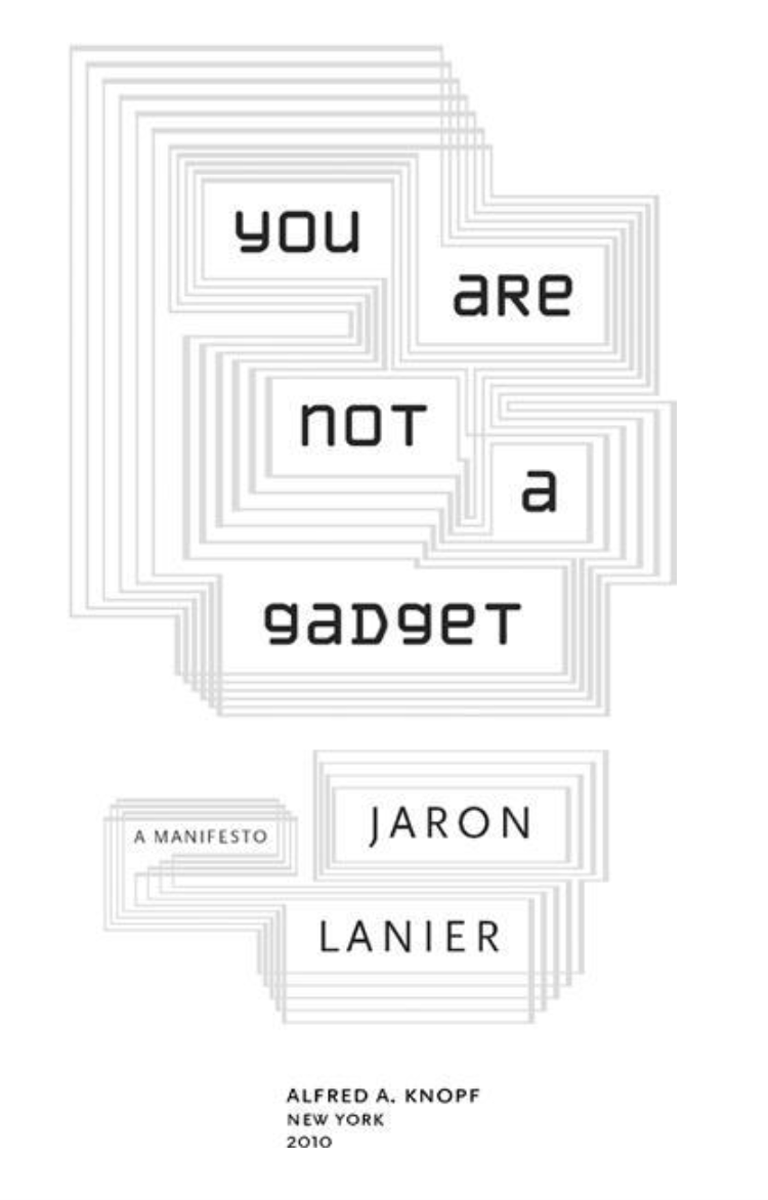 Jaron Lanier, in his book You Are Not a Gadget (2010), is very critical of the Web 2.0. Jaron emphasizes how Web 2.0 became “flooded by a torrent of petty designs… Anonymous blog comments, vapid video pranks, and lightweight mashups may seem trivial and harmless, but as a whole, this widespread practice of fragmentary, impersonal communication has demeaned interpersonal interaction.” Janon goes further with his critics: “What happens next is what’s important. If the books in the cloud are accessed via user interfaces that encourage mashups of fragments that obscure the context and authorship of each fragment, there will be only one book. This is what happens today with a lot of content; often you don’t know where a quoted fragment from a news story came from, who wrote a comment, or who shot a video. A continuation of the present trend will make us like various medieval religious empires, or like North Korea, a society with a single book.”

Jaron is entirely pessimistic in his criticisms of the Open Culture. His answer to unlimited content is quality and not a Supercloud that could contain and produce intelligence from it. Jaron explains: “The fragments of human effort that have flooded the internet are perceived by some to form a hive mind, or noosphere.These are some of the terms used to describe what is thought to be a new superintelligence that is emerging on a global basis on the net. A fashionable idea in technical circles is that quantity not only turns into quality at some extreme of scale, but also does so according to principles we already understand. Some of my colleagues think a million, or perhaps a billion, fragmentary insults will eventually yield wisdom that surpasses that of any well thought out essay, so long as sophisticated secret statistical algorithms recombine the fragments. I disagree. A trope from the early days of computer science comes to mind: garbage in, garbage out.” These criticisms are reminiscent of ones directed to the junk food industry, where (un)limited quantity of garbage is pushed to a maximum number of people.

In response to unlimited design available from open designs, Jos de Mul encourages the designer to become a metadesigner. “The almost unlimited number of combinations that databases offer us, urges to some form of limitation of the possibilities. In the case of open, database-mediated design this calls for a new role for the designer. The designer should not give up his role as a designer (or restrict himself to his traditional role as designer of material or immaterial objects), but he should instead become a metadesigner who will design a multidimensional design space that provides a user-friendly interface which enables the user to become a co-designer, even when this user has no designer experience or no time to gain this experience by trial and error. The task of the metadesigner is to create a pathway through design space, to combine design bricks into a meaningful design. In this respect the metadesigner resembles the scientist who no longer creates a linear argument, but a model or simulation that enables the user to explore and analyze a specific domain of reality, or a game designer who designs a game space where, if he is successful, meaningful play can take place.”

Open design is transforming how designers create, share and distribute their products. It transforms how users approach, consume and connect with the products. Hope is that designers will be empowered, will free themselves from the Church of Industrial Design and from the Noosphere. Combined with quality, openness has the power to realise this dream.