In the open source community, even more in the RepRap 3D printing community, people smile thinking about the fact that, one day, even the largest companies will have to accept the different, and sometimes more efficient, process of open collective creativity and integrate them in their production model. That day has come for Telefónica, the largest Spanish multi-national company by market capitalisation and one of the largest telecommunications companies in the world. 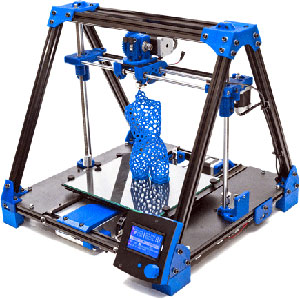 Its I+D division used a 3D printer from RepRapBCN, retailing as a kit for €740 (and assembled for €999) to research and develop RadioMe, a device targeted at less technologically savvy (they specifically refer to seniors) who want to interact with their progeny’s new social media tools, such as Whatsapp and other instant messaging services.

“We use a 3D printer to fabricate the inner parts,” said Pol Trias, designer and innovator in the I+D division. “Having the 3D printer in house it took us less than a day to create new prototypes for the inner parts and test the technology. Being connected to the international RepRap community, whenever you have a doubt about something you can rapidly get in touch with someone else who may have already experienced and solved the same issue.”

This way even an advanced 3D printer, able to use different materials and even switch between materials, become more affordable and easily pays for itself by allowing the designers to save time and get the to market with added value products, aimed at smaller groups of people with specific needs. Definitely sounds like a good I+Dea.