Meet Olli, a 3D printed minibus capable of transporting 12 passengers! The vehicle was unveiled by Arizona startup Local Motors outside of the US capital city, Washington. The electric, self driving shuttle was created in a partnership with IBM, using their Watson supercomputer. 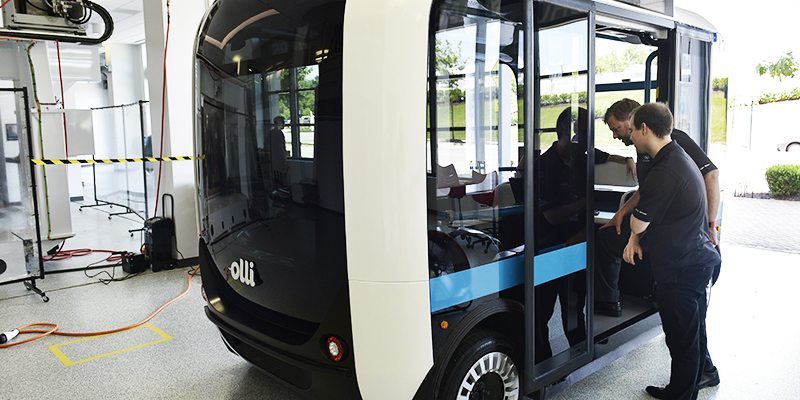 So what is Olli?

Olli was designed to be like Uber; on demand transportation solution that can be summoned with an app. It can also be printed to spec in a matter of hours. Olli will be demonstrated in National Harbor, Maryland, over the next few months with additional trials expected in Las Vegas and Miami. Local Motors is also in talks to test the vehicles in dozens of cities around the world, including Berlin, Copenhagen, and Canberra.

Even though companies like Google and several others making self driving vehicles anticipate years of testing before we see autonomous cars on the road, Local Motors Co-founder and Chief Executive John Rogers says Olli is ready to roll as soon as regulations allow it.

“Local Motors is about selling (the vehicles) into the markets that are ready now,” he said. Rogers said the company has an advantage over other systems because it is building the vehicles from the ground up, and producing most components with 3D printers. “We hope to be able to print this vehicle in about 10 hours and assemble it in another hour.”

Rogers vision includes hundreds of “micro factories” producing the vehicles all over the world. He says the design is easily customizable based on a customer’s needs. 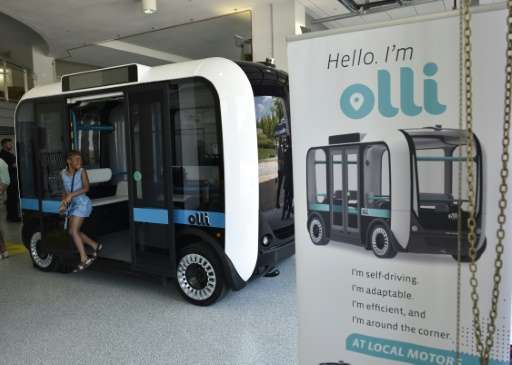 What is driving Olli?

The driving is controlled by a system developed by Local Motors with several software and tech partners. The user interface is provided by IBM, which will enable passengers to have conversations with Olli.

“Watson is bringing an understanding to the vehicle,” said IBM’s Bret Greenstein. “If you have someplace you need to be you can say that in your own words.”

This is IBM’s first foray into fully autonomous driving, although it has worked with other automotive companies in the past on technology solutions.

Passengers can use natural language to communicate with Olli via Watson, helping create a relationship with their vehicle.

“A vehicle that understands human language, where you can walk in and say, ‘I’d like to get to work,’ that lets you as a passenger, relax, and enjoy your journey.” says Greenstein.

The vehicle relies on more than 30 sensors and streams of data from IBM’s cloud.

Watson seems to be the Siri of driving interfaces, you can ask it why it has chosen a particular route, how it is running and functioning, and even ask “are we there yet?” It also gives recommendations on restaurants, tourist spots and more based on who you are, your preferences, and where you are going.

“Cognitive computing provides incredible opportunities to create unparalleled, customized experiences for customers, taking advantage of the massive amounts of streaming data from all devices connected to the Internet of Things, including an automobile’s myriad sensors and systems,” said IBM’s Harriet Green.

Rogers has said that there is a long list of countries interested in Olli, and they have had discussions in at least 50 of them where there is interest in new transportation solutions. Las Vegas have purchased two of the vehicles, and Miami-Dade County is exploring a pilot program in which several autonomous vehicles would be used to transport people around the Florida region.