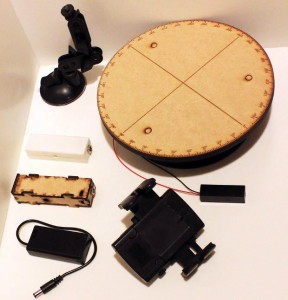 Moedls is a new, consumer-friendly mobile laser scanner that processes data via a smartphone. According to the company’s website, the official launch is still a few weeks off, but the product has been highlighted as one of 10 semi-finalists in Engadget’s Insert Coin Awards. Voting will close imminently for these 10 and five finalists will be announced tomorrow (1st March).

Moedls is intended to offer a low-cost, mobile scanning application on a smart phone (currently iOS or Android) that is compatible with a line laser to capture data from the part being scanned on a rotating platform. The app captures a point cloud of data, which can then be exported to 3D software for further work, including reverse engineering, adaptation or modification and 3D printing.

Moedls is the brain child of John Fehr, who conceived the project to save some of his daughter’s physical sculptures in digital form. The combination of parts — the app, the laser and the rotating platform are all included in the Moedls offering, which will reportedly retail around the $300 mark.

The video demonstrates Moedls in action, using an iPhone 3GS.

If successful, this 3D scanning tool could open up a whole new paradigm for makers and consumers that to date have found the economic barriers way to high.