Nicolas Huchet lost his right hand and part of his right arm in a hydraulic press accident 12 years ago. As a result, he wears a myoprosthesis, an electronic hand and arm controlled by muscle sensors. He’s spent a lot of time and energy looking at every possible model, including RSLSteeper’s bebionic and Ottobock’s Michelangelo. These options range in price, but he found that even $50,000 models were unsatisfactory.  Plus, his favorite choice out of all of these options were not covered by his health care plan.

The option that he could not afford seemed to be perfect: it had articulated carbon-fiber fingers, variable speed, 14 grip patterns, and myoelectric sensors. But he never stopped researching and looking for alternatives. He didn’t know that 3D printed options were available and open-source. In fact, he hadn’t really heard of 3D printing at all. 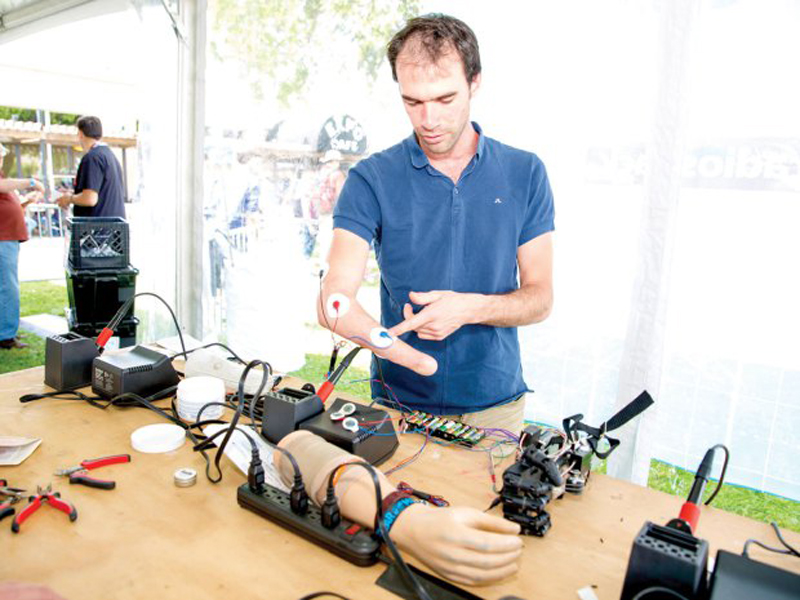 Now, there are a cadre of companies, groups, and non-profit organizations dedicated to helping inexpensive and well-made prosthetic arms find the people who need them. A quick sampling and recap: There is California-based Not Impossible Labs, which designed a lightweight, 3D-printed iteration of the 3D printed Robohand, which now has been downloaded over 9,000 times from Thingiverse.

There is also e-NABLE, begun by Robohand co-creator Ivan Owen. They now have 8 different designs and amazing video tutorials to help anyone interested in making them. There are prosthetic hands designed from the open-source 3D Printable robot InMoov. There are also plenty of great organizations hard at work to improve and create new designs, such as the Open BioMedical Initiative and the Open Prosthetics Project which share open-source files, tips and tutorials.

Not knowing what 3D printing was, Nicolas was walking through his hometown of Rennes, France in October 2012, according to a post at Make, and happened to walk past an exhibition displaying “strange machines” that were slowly creating objects out of plastic.  Nicolas entered the exhibit and said, “Excuse me, is it possible to make a robotic hand with this? Because I have a prosthetic hand.” Anticipating an awkward reaction like he usually experienced, he was surprised to find that the people running the event became very excited. They said, “We can download a robotic hand on Thingiverse and make the pieces with this 3D printer. Here is one called InMoov, the guy is using Arduino and it’s open source.”

Though he probably didn’t know what the hell “Thingiverse”, “InMoov” or “Arduino” meant, he knew right away that they were talking about an inexpensive bionic hand that you can make and share with other people. Nicolas dove right in, and a few months later, in February, Bionico was formed and ready for launch.  With help from the LabFab in Rennes, he printed digits for the hand. He received design input from Brazil and muscle sensors from the US. 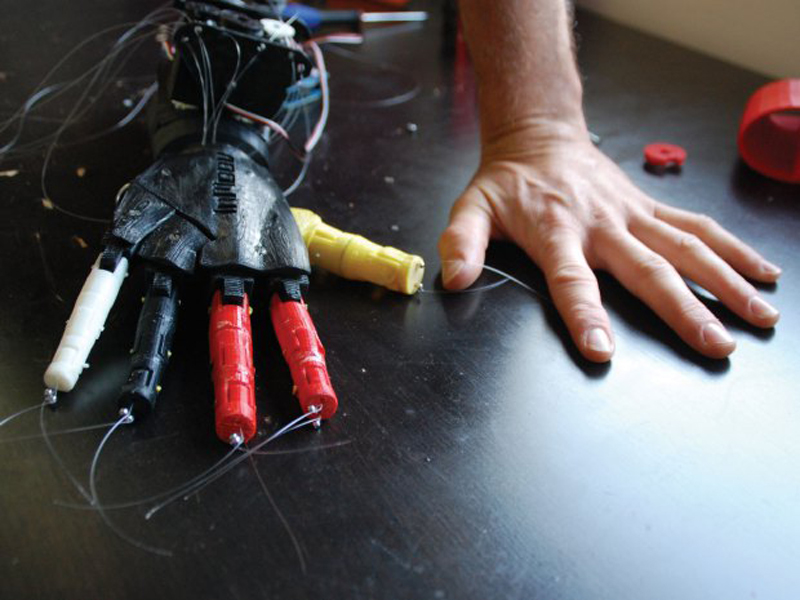 Bionico.org offers a “3D-printed arm and hand, equipped with actuators to move the digits and joints, fishing line to connect the actuators to those joints, muscle sensors and a socket where they rest, batteries, and an Arduino brain.”  The cost? $250.

Since most similar devices cost anywhere from $8,000-$80,000, making a competitive robotic prosthesis would be challenging. The qualities had to be comparable: lightweight, durable, able to open and grab a soda can, and nimble enough to grasp a coin. The first prototype was presented in June of 2013 at the Tu Imagines? Construits! Festival in Rennes with the creator of InMoov, Gaël Langevin. With help from LabFab Rennes, the prototype Bionico was made with 3D-printed plastic, fishing line, and an old Nesquik box! After the first successful presentation of Bionico, Nicolas was invited to the Maker Faire in Rome, Geek Picnic in Russia, and the World Maker Faire in New York. 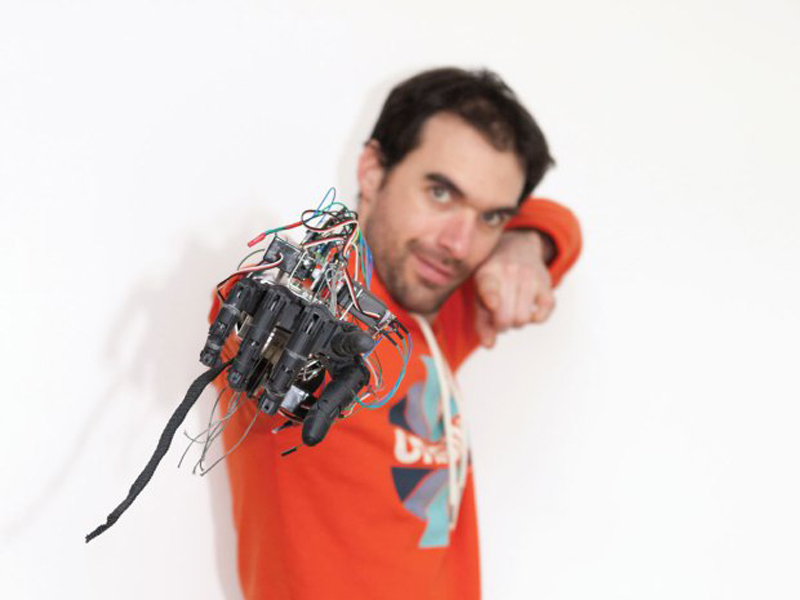 Nicolas and Bionico have a lot of options for their next move. They could organize a successful crowdfunding campaign or look for sponsors, but what they plan to keep as their highest priority is the continued formation of an international network and database dedicated to improving low-cost open-source prosthetic devices.