Mick Ebeling is making a deep impact with a very simple approach: Help one, help many. Founder of Not Impossible Labs, a nonprofit that creates tech solutions for real-world problems, Ebeling was moved by the 2012 TIME story about a Sudanese amputee whose arms were lost in a bomb attack. To protect himself from the blast 14-year-old Daniel Omar hugged a tree, which shielded his body from the explosion though exposed his arms. 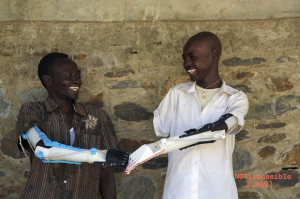 Stories such as Daniel’s are devastatingly common in Sudan, and there are more than 50,000 amputees as a result of endless conflict. So how does helping one person begin to help 50,000?

Ebeling’s idea: to travel to Sudan to meet Daniel and set up a 3D print lab that would create prosthetic limbs for children of war. Doctors at the refugee camp were taught not only how to use the printing equipment, but were concurrently becoming computer literate as most had no prior experience with the computers.

Put in other words, a possible answer to how one person can help many is through teaching.

Not Impossible Labs has taken an inspiring lead simply by sharing their 3D printing know-how. While the 3D print lab at the camp produces an average of one prosthetic arm a week, the social impact of this work is enormous in scope. The project expresses an emerging crowd-solving ethos, one that posits that individuals can shift global responsibilities from external authorities, governments, companies, etc., to also include themselves. It is drawing passionate people from all backgrounds who are motivated by global welfare, and inviting creative action toward fixing systems that are ineffective.

If it seems hard to imagine how a crowd-solving modality can be implemented in a practical way, look no further than open-source software, discussion forums and crowd-sourced answers – it is already a part of daily life. What it amounts to is people helping people. And what is exciting about this idea is that Ebeling clearly demonstrates that through genuine connection a small-scale approach that focuses on one person at a time has a widely impacting reach.

Project Daniel isn’t the first time Ebeling has helped a person recover faculties lost after devastating injury. In 2011, Ebeling gave an awesome TED talk about how with his group of collaborators their lab created an eye-tracking headset that enabled a paralyzed graffiti artist to draw for the first time in seven years. The device, called the Eye Writer, is open-source, has documented designs free for anyone to use, and runs at around $200 to make. Shared schematics for devices such as the Eye Writer open the door for therapeutic technologies that can be cheaply manufactured and coverable by insurance companies. Not Impossible’s hacking campaign seems destined to disrupt standard bureaucratic practices within the healthcare system and do so with creativity and compassion.