“The choice in many cases is not the choice between a plastic hand and a $40,000 prosthetic…it’s a choice between nothing and a prosthetic and this is a lot better than nothing.” Jon Schull, of the Rochester Institute of Technology, said this in a recent Japanese news story covering the work of E-Nable, the non-profit behind some of the most prolific 3D printed prosthetics in the world.  As the group continues to help an increasing number of people with disabilities obtain affordable medical devices, the power of E-Nable prosthetics grows even further beyond the “nothing” referenced by Schull. As evidence of this power, the organization has begun to branch off, with a new group called Limbitless Solutions forming as the result of a recent printed prosthetic project involving E-Nable’s first bionic arm.

Alyson Pring, the mother of a six-year-old born without a right arm, couldn’t afford the industry standard $40,000 for a prosthetic limb and, so, approached E-Nable to find some solution for her son, Alex. It was then that Pring was connected with Albert Manero, a PhD candidate and Fulbright scholar from the University of Central Florida Armory, who was volunteering with the organization at the time. Manero pooled together fourteen friends from various backgrounds and the team spent the next eight weeks designing what became the Limbitless Arm. 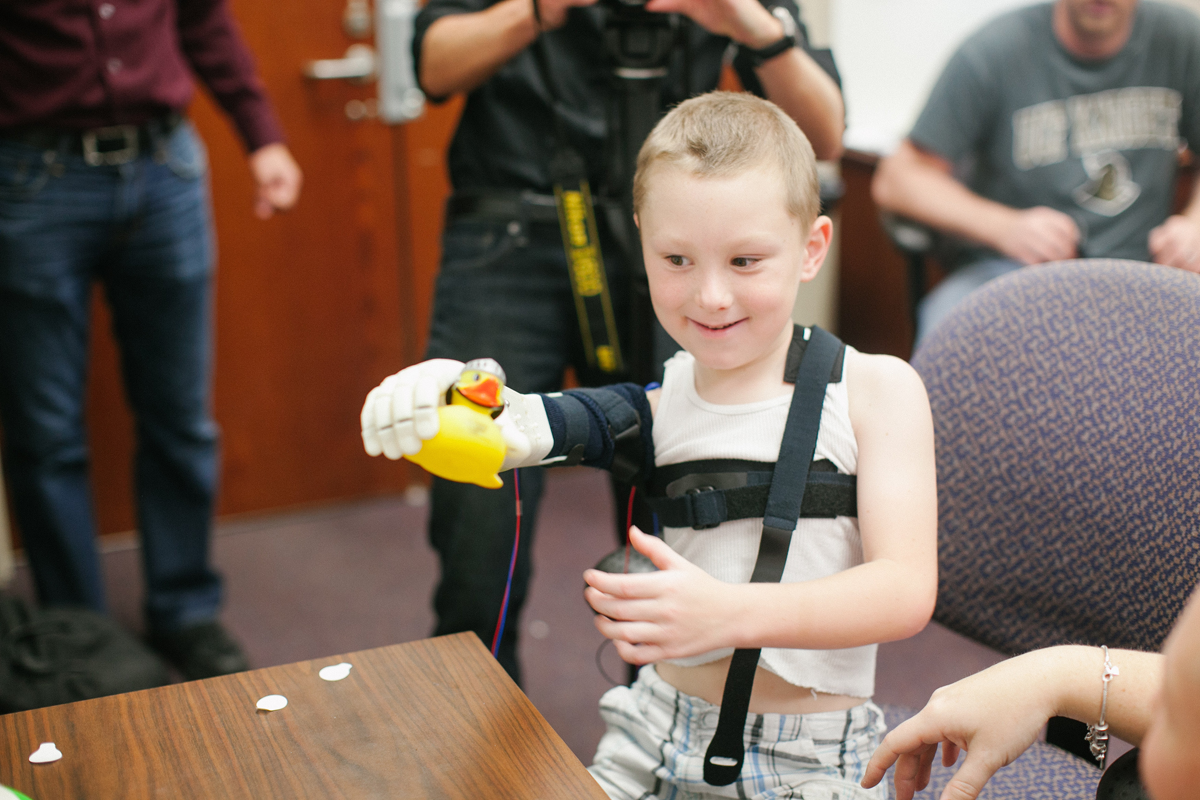 The Limbitless Arm, with printable parts and instructions available on Thingiverse, features an Arduino Micro, Aircraft Servo, LiPo batteries, as well as a 3D printed elbow, forearm, forearm lid, and flexible hand. To tie it all together and make it wearable is a shoulder harness, fishing line, a velcro strap, foam pads, and a lot more. One of the key features of the device, however, is a $50 muscle sensor. Previous E-Nable hands have worked through the flexing of the wrist muscles, but, in the case of Alex, the team had to figure out a way control the hand’s movement with the muscle’s in his upper arm.  This muscle sensor  picks up the electrical activity of Alex’s bicep and tricep and converts it to readable data for controlling the 3D printed limb. The team has also added Tippi Micro Gel Grips to make the limb even more capable of grasping.  All of this (and there is a great outline of the design with illustrations at the UCF Magazine’s website), brought the total cost of the Limbitless Arm to around $350, less than 1% of the cost of a similar product made by the medical equipment industry.

Though the limb is heavy and controlling it with his arm muscles takes some training, the new device has allowed Alex to grip and hold objects and will allow him, his mom believes, to feel more confident around his peers.  No longer will the lack of a limb make him feel out of place, she explains in the video below, but it will empower him to feel unique and capable. And, because it has been made with 3D printing, the arm can be continually customized as he grows, as opposed to expensive prosthetic counterparts.

Alex’s story is only the beginning for Limbitless (whose members continue to be E-Nable volunteers).  They are refraining from leaking details about upcoming projects to the public, but they do have more in the works.  What they will say publicly is that they are working to improve Alex’s arm with a bendable elbow, waterproofing, and the use of stronger materials.  What they haven’t made public may be even more impressive.  More importantly, Limbitless and E-Nable continue to help people with low-cost solutions to medical problems and, as they do, the 3D printed prosthetic that is not nothing will become so much more that it could put the mainstream prosthetics business out of business altogether.