Widespread adoption of 3D printing at the consumer level faces two major obstacles: ease of use and affordability are the issues most consumers face.

Taiwan-based Kinpo Electronics, (TWSE:2312), a company with 17 operating subsidiaries, an established presence in the US, and projected revenue of $1.4 billion for 2013, has addressed both of these obstacles.

XYZprinting is predicting sales of 100,000 3D printers this year and has announced a staggering sales target of more than 1 million 3D printers by 2016. This compares to 19,317 printers sold last year by Stratasys (see page 58 of annual report). Should Kinpo Electronics and XYZprinting come anywhere near their sales target, they will become a major player… possibly the major player for consumer grade 3D printers.

Kinpo Electronics trades only on the Taiwan Stock Exchange from 8 p.m.- 12:30 a.m. EST, and live trading can be tracked here.

Kinpo and XYZprinting have directly addressed two of the greatest barriers to widespread consumer adoption of 3D printing with a $499 3D printer that features plug and play functionality for average consumers. 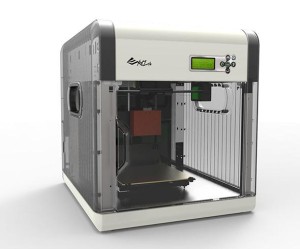 The da Vinci 3D printer was very well received at the 2014 Consumer Electronics Show in Las Vegas, and won the CES Editors’ Choice Award (see video) for “affordable and approachable 3D printing.” This CES stamp of approval is validation of the da Vinci 1.0 as a strong competitor coming out of the gate.

A look at the qualifications required to win the CES Editors’ Choice Award and how the voting is conducted is here.

The da Vinci’s $499 price point and ease of use for the average consumer looking for their first 3D printer can be better appreciated when investors consider how the printer’s 100 micron resolution and larger build volume compares with MakerBot Replicator 2 and Cube 3D printers. 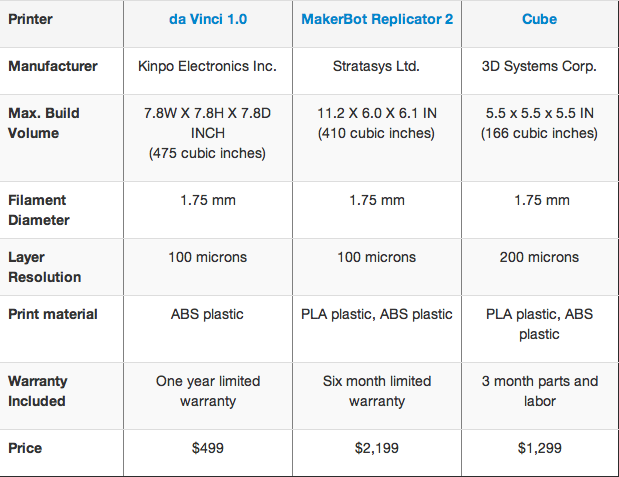 Coming close on the heels of the da Vinci 1.0 launch will be the da Vinci 2.0 this summer. This version prints in ABS and PLA plastics and features print bed auto-calibration. The da Vinci 2.0 also has dual extruders, allowing the printer to lay down PVA (poly-vinyl alcohol) along with the main printing material and to print two colours at the same time.

XYZprinting appears confident in their ability to become a dominant force in the consumer 3D printer space. Simon Shen, chairman of XYZprinting told the Taipei Times last week that the company expects to continually launch newer versions of their printers, and stated: “The 3D printer market is the only market that can achieve 100 percent growth in shipment volume over the next three years. The smartphone or tablet markets can no longer achieve similar growth.”

Most striking of all is XYZprinting’s sales target of “more than 1 million units of 3D printers globally by 2016.” To help meet this goal the company is investing $100 million USD for capacity expansion.

Public Awareness of XYZprinting to Increase

XYZ printing is a Gold sponsor at the largest global 3D printing conference series, the latest edition of which is the upcoming “Inside 3D Printing Conference and Expo” April 2-4 in New York. XYZprinting describes itself as: “Committed to being the number one provider of 3D printing products and services to consumers and small businesses around the world. Utilizing its parent company’s rich history and expertise in CE product manufacturing, coupled with its innovative attitude, XYZprinting is set to deliver high quality 3D printing products to market at startling price points unmatched in the industry.”

Along with its strong presence in NY in a couple of weeks, this video makes it pretty clear which geographic market XYZprinting is targeting:

XYZprinting will begin with sales on Amazon.com and other online portals. It’s important to note that Kinpo has mass manufacturing capabilities at costs far lower than Stratasys and 3D Systems. Should sales of their $499 3D printers begin at retail giants like WalMart and Target, I believe “XYZprinting” and “da Vinci” are the names most consumers will soon be associating with 3D printing.

Trading in Kinpo Electronics (TWSE:2312) has been unremarkable YTD, although shares have outperformed 3D printer manufacturers DDD, SSYS, VJET, and XONE. Based on my expectation that more global investors will soon become aware of Kinpo’s move into 3D printing and the company’s potential to dominate the consumer grade 3D printer market, I believe this trend may continue.

While there is currency exchange risk and additional brokerage fees for investors outside of Taiwan, I believe Kinpo Electronics is an attractive investment at current levels.

The company is expected to report some $1.4 billion USD in sales for 2013, yet has a market cap of approximately $570 million USD for a price-to-sales ratio below 0.5.  With sales targeted at more than 1 million 3D printers by 2016 and the potential the company has to achieve that target, I believe Kinpo Electronics is a company investors in 3D printing should take a very close look at.