Is This a Future Billionaire? 15-Year-Old Files Patent for His Own 3D Printer

The democratization of technology that has occurred over the past twenty years or so has enabled greater numbers of people to program new apps and build new devices that can increase their quality of life.  When, previously, communities in developing nations wouldn’t necessarily have had access to supplies made from mass manufacturers in other parts of the world, 3D printing has given some people the tools to maintain a supply of useful items.  At the same time, the children who are growing up with this technology are becoming empowered at a very young age to pursue their own dreams and their own careers, rather than falling into the paths created by older generations.

At BBC News, Regan Morris details a number of kids based in Los Angeles who have taken to technology at an early age and already started their own businesses. Included in her rundown is Thomas Suarez, who has made Internet headlines numerous times for developing iPhone apps, starting at the age of 11.  After writing an app called Bustin Jieber, which Suarez calls a “Justin Bieber whack-a-mole”, the developer has given own TED Talk in his native Manhattan Beach, California, created his own Google Glass programs, written product and technology reviews for the Tribeca Film Festival, and even started his own company, CarrotCorp. Somewhere in there, Suarez also developed a love of 3D printing, and even visited the MakerBot flagship store in New York where he got to sit down with the company’s CEO, Bre Pettis. 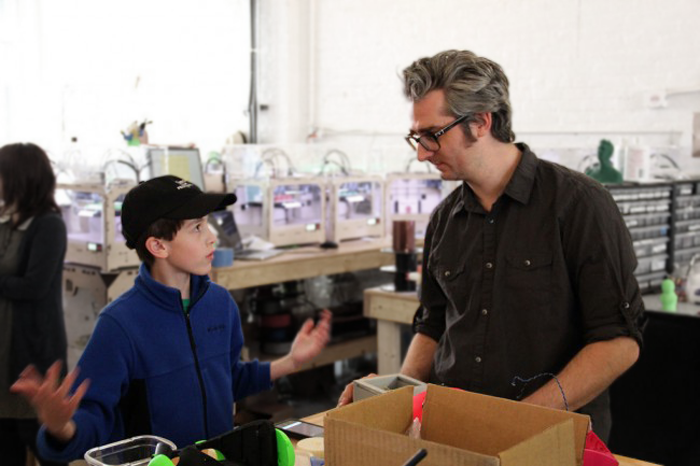 Now, Suarez is fifteen-years-old and is ready to give the 3D printer brand a run for its money.  The young innovator has already filed a patent for his own 3D printer that he believes will be more reliable than the current generation of 3D printers and 10x faster, saying, “The key there is speed.” The BBC report (embedded at the bottom of this article) makes it sound as though Suarez’s 3D printer is still being kept secret, while the status of his patent is under review.

Morris’s piece continues to document brilliant young minds all starting their own businesses. Six-year-old Kiowa Kavovit, for instance, went onto Shark Tank to pitch her idea for paint-on bandages, Boo Boo Goo.  She also describes the Incubator School in Los Angeles, a middle school with the goal of “Launching the Entrepreneurial Teams of Tomorrow.“  The school focuses on fostering the entrepreneurial spirit in children, leading them to create their own businesses as part of the school curriculum. Regardless of the young people’s innovative intents, the BBC reporter frames her segment with one question: “Is this a future billionaire?”

I strongly believe in empowering people, taking lessons from Myles Horton and Paulo Freire, educators who believed that the students themselves should guide the learning process.  Considering all of the entrepreneurs in the report, I’m happy that these young people are being encouraged to develop their own interests and skills, to educate themselves about what they’re passionate about.  I do fear, however, the business-oriented frame formed by the society surrounding them.

Particularly in the case of the Incubator School, I see the means by which the students are being taught as quite valuable and important, but am wary that the ends may be a bit off.  As opposed to starting businesses, the same means of pushing young students to self-actualize could be employed towards more humanitarian, or at least, more neutral ends.  In my undergraduate psychology studies, it was impressed upon me that intrinsic rewards tend to be more fulfilling than extrinsic ones, so that doing something just for the sake of doing it is more enjoyable than being paid to do it.  In the case of the Incubator School, why not teach students to use technology just to use it, to wonder at the scientific beauty of it?

We haven’t seen what Suarez’s 3D printer will ultimately look like, nor what his future will look like.  He could fall into the ultra-hyped world of Silicon Valley, populated by tech millionaires and billionaires and those aspiring to be such.  Or he might develop a completely self-replicating printer that destabilizes the world’s economy.  Or something else entirely.   Because, when it comes to the coming generation, maybe we shouldn’t project our vision onto these kids, but let them project their visions themselves.

So, as you watch the BBC piece below, imagine if, instead of asking “is this a future billionaire?”, Morris began by asking Suarez himself, “What are your plans for the future?”