Minibuilders could be the next big technological leap in the construction industry after the Institute for Advanced Architecture of Catalonia revealed the small robots with grand ambitions.

The plan with Minibuilders was to 3D print a grand scale construction project using an army of small robots built for distinct and unique tasks. Just like a team of human builders, these robots could follow a series of plans to create an entire building in less time and with lower costs, environmental impact and material waste than traditional construction methods.

Minibuilders from STEREOTACTIC on Vimeo.

Until now the theory has always been that big structures, like buildings, need a big printer. The additive manufacturing devices used to create buildings have often combined large printer heads with robotic arms that are adapted from the automotive and aerospace industries. These are large, unwieldy and designed to work in isolation.

The IAAC has reimagined the whole process and come at it from a different angle, every angle, with a number of smaller robots that work together.

Foundation robots lay the first 20 layers and are fed by another robot which is there simply to regulate the supply of materials. They literally follow a line on the floor, although they can surely be programmed to follow a pre-determined path without laying tape down in the future.

Grip robots then take over and print layer after layer that make up the walls. They move up with the structure by gripping on to the layer they have just laid down and they can produce straight or curved walls thanks to a nozzle that can shift side to side and a roller system that means they follow the path of the foundations religiously. With a fast curing material, the grip robots can simply create a curve, print horizontally and lay the ceiling, too.

Windows, door lintels and more can be worked into the plan and the individual robot tirelessly works its section. Once the basic structure is complete, it can be reinforced to any specific level by vacuum robots that latch on to the surface and print layer after layer on top of the printed mold.

These robots move freely, thanks to the vacuum suction. So builders can choose to thicken an entire wall or ceiling, or just apply reinforcements to specific areas that need the structural support. 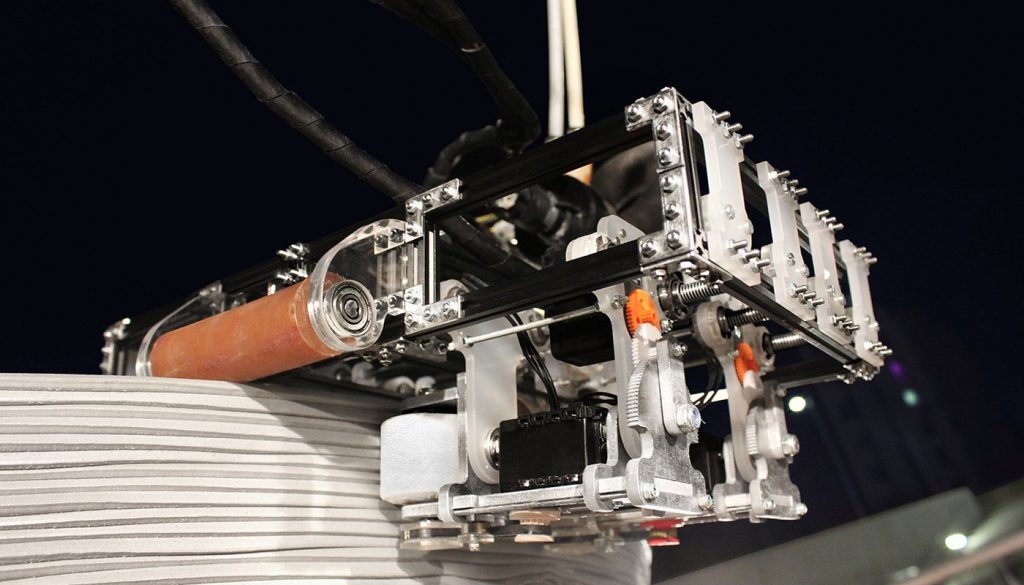 It’s an intriguing concept. These robots are exceptionally agile, they can work at any height and in vast numbers to create highly complex structures, save people from going into dangerous areas or working at height. They also the potential to slash building times, eliminate labor costs and provide cheap housing for the poor.

This concept of an army of robots also means the whole idea of a giant printer, which inevitably limits the size of the building and creates its own logistical nightmares, falls by the wayside.

These tiny robots, no bigger than a simple desktop consumer printer that makes your models at home, can technically build skyscrapers.

That’s the brave concept that the IAAC is now taking to the world and it is looking to bring in big business to take this incredible idea to the next level. It is something that simply has to happen.

Right now the potential is clear. It’s going to take a lot of work to turn these robots into the next generation of builders, but you are going to see a lot more of these little robots with big hearts.