Limited by the space in my apartment, the time in my life, and the patience in my mind, I’ve printed very few things that are larger than my printbed.  As a result, the 3D prints I’ve made are limited to small desktop figurines, but there are others much more ambitious than me who have taken full advantage of their desktop 3D printers to create large, elaborate pieces of art.  Polish 3D printing bureau Fucco Design has done so by fabricating full-scale replicas of three figures from a historic church in Wrocław.

After the St. Mary Magdalene Church, built in the 13th Century, was heavily damaged during World War II, the Triptych of Luban barely survived. Housed now at the Wrocław Archdiocese Museum, the parish priest from Luban decided to reclaim ownership. Because he could not obtain the original from the museum, he hired Fucco Design to replicate the figures with 3D printing. The Triptych was first 3D scanned by Scanning 3D. Fucco then 3D printed some test prints to determine the type of filament they would use to reproduce the sculptures, finally landing on woodFill. 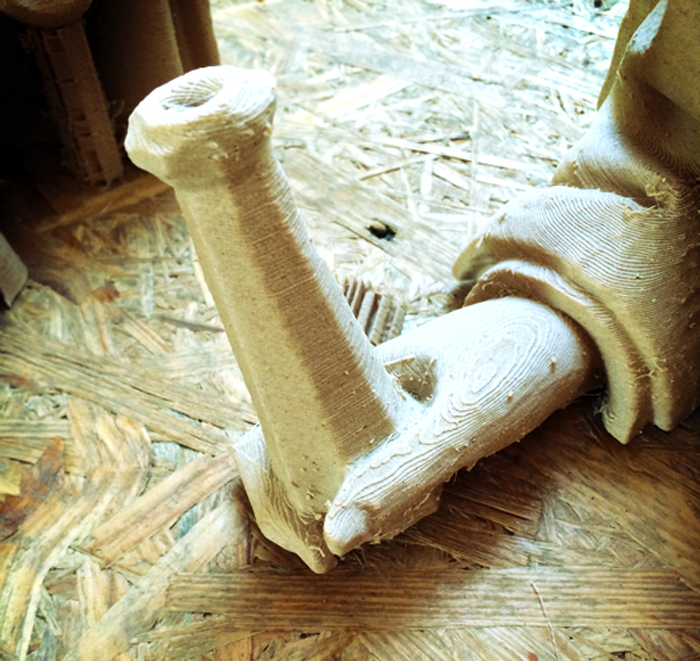 The scan was divided up into 78 printable parts to be manufactured on the firm’s Replicator 2, Ultimaker Classic, and their own printer, Exxtrudo.  For the finer details of the sculpture, like the face and hands, Fucco set the layer thickness at .1 mm, turning it up to .3 mm for larger, less detailed parts.  To achieve the suitable prints, the heated beds of the printers remained off and the temperature of the extruders were set to a constant 230°C.  First, they’d tried to print directly onto blue painter’s tape, coated with a glue stick, to ensure proper adhesion to the printbed, but, failing that, turned to Kapton, instead, coated with ABS juice. 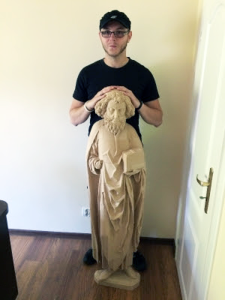 Each block was then marked, in order to make the assembly process easier, and, after support structures were removed from the prints, glued together to form the final statue.  The final sculpture stands at 153 cm high, with each of the 78 blocks measuring about 18 x 15 x 18 cm.  With every piece taking about 4 – 14 hours (8 on average) to print, totaling 624 hours for the entire sculpture (not including any failed prints).  Next, the statue will be painted to represent the original colors of the piece.

By using the wood-plastic composite, Fucco Design was able to 3D print the foundation for an excellent replica of a piece of art hundreds of years old.  Though it took skill to pull off, it certainly didn’t require the craftsmanship necessary to hand carve the pieces from actual wood.  More importantly, to me, they did so on desktop 3D printers, pointing to the power of these low-cost machines.