Currently packing up his office at Sheffield University, the primary inventor of high speed sintering (HSS) Professor Neil Hopkinson is about to take this cutting edge technology from the lab to the industrial sphere. As the newly appointed Director of 3D Printing with Cambridge-based Xaar plc, Hopkinson will oversee the development of HSS and other 3D printing technologies within the inkjet printhead company for use by their OEM partners.

I was recently introduced to Prof. Hopkinson through IP lawyer and 3D printing expert John Hornick, who described HSS in his new book 3D Printing Will Rock the World. Unlike selective laser sintering (SLS), which fuses material powders with a laser, point by point, HSS uses infrared lamps, making it possible to 3D print large objects, or series of objects, at speeds that rival injection moulding. In other words, HSS has the potential to make 3D printing a truly viable option for the mainstream mass manufacturing of end products.

Hopkinson tells me that he came upon the idea for HSS shortly after completing his doctorate. He explains, “In 1999/2000 I worked with my supervisor Phil Dickens to perform an analysis to find out what the cut-off volume would be for series manufacturing with laser sintering as compared with injection moulding, with sintering typically used at that time to create one part or a few parts and injection moulding used for millions of the same part. I discovered that the cut-off volume for a small complicated part was 14,000 units and realized that manufacturing using what was then known as Rapid Prototyping was going to be a commercial reality. I felt that the greatest contribution I could make to 3D printing would be to lower the costs of laser sintered parts. I thought that the most effective way to reduce the cost would be to drop the most expensive component, the laser.”

By replacing the laser with an infrared lamp and using industrial inkjet heads to lay down layers of infrared radiation absorbing material (carbon black), he and his colleagues at Loughborough University, which holds base patents to HSS technology, developed a method for passing the heat source across large swaths of thermoplastic powders to fuse them together at a much quicker rate. “Think about a laser,” Neil says. “A laser heats a polymer particle in a fraction of a second, moving very quickly. But it does so point by point, which is not very efficient. And, though our infrared lamp moves at a slower speed, it can sinter larger areas at a time.” He continues, “Our use of a lamp enables us to heat particles at a more gentle rate than a laser and this opens the door to a range of new polymers that we can process, including a range of elastomers and other polymers that would otherwise be prone to thermal degradation in the machine. Our gentle heating allows us to operate in air rather than a nitrogen rich environment, it also allows us to use 100% recycled material with no sight of the surface roughness known as ‘orange peel’ that is seen in laser sintered parts made from recycled powder.

Since the invention of HSS, Hopkinson moved to The University of Sheffield where he and his colleagues have been able to further develop the technology. He says, “The next step is to build a 1-meter-cubed machine. Depending on the geometry of the part, it will be about 10 to 100 times quicker than laser sintering. I expect a production rate of about 0.67 seconds per part to make a finger-sized part.” This process still has the benefits of SLS, in that the powder bed offers built-in support for intricate objects with moving parts, but with the added benefits of speed rivaling mass production. This means that it will be possible for manufacturers to 3D print one-of-a-kind, complex parts in large quantities and at quick rates. This machine will also have the capability to print secondary materials, such as conductive metallic paths within parts as they are made.

It’s no wonder, then, that the UK government funded Hopkinson’s research to the tune of £1.5 million (including industry partner contributions) to examine how huge industry partners Unilever, BAE Systems, and Cobham Technical Services could implement the technology for possible end part production. Xaar, who were also involved in the UK-funded FACTUM project, naturally chose to take Prof. Hopkinson on as their Director of 3D Printing, given his technology’s use of their industrial inkjet heads in the HSS process.

While Neil cannot speak in great detail at this stage about the firm’s planned use of HSS, he was able to say that the company is preparing to assist its OEM partners who had obtained licenses to commercialize the technology. One partner he was able to mention explicitly was 3D printer manufacturer voxeljet. voxeljet has already been able to successfully license binder jetting technology invented by ZCorp for its own large-scale 3D printing systems. The German firm has since reported that it plans to offer its own HSS system by 2017 or 2018. We can’t say for sure what other routes may be found for the technology to make it out of the lab and into the world of mass manufacturing. It’s possible, looking at the industrial members of the FACTUM project, that we could see a company like Unilever use HSS for consumer goods and BAE Systems 3D printing aerospace parts, with a vast range of sectors and applications between these two extremes. 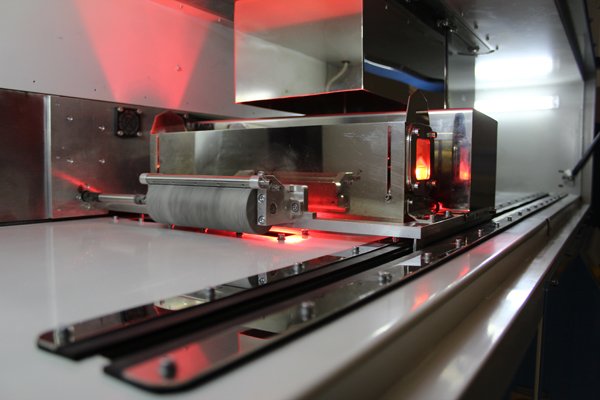 When it does hit the market, HSS will be entering a space increasingly populated by other inkjet 3D printing technologies. In addition to Stratasys’ powerful PolyJet process, an Israeli firm called XJet plans to use inkjetting for 3D printing in metal. As for PolyJet, Neil highlights the relative speed benefits of HSS, the polymers used are different, as well. He adds, “PolyJet is a great technology, but we use thermoplastics and that process uses thermoset plastics. An important difference between the two is that, after thermoset plastics are cured, they set into place and cannot have their form changed again, making them unsuitable for recycling. As a result, processes such as HSS that use thermoplastics, which can be more easily recycled, are generally better for the environment.”

With the ability to 3D print large objects and batches of objects at a speed of around 10 seconds per layer, HSS has the power to bring the benefits of 3D printing to the world of mainstream manufacturing. You can imagine printing complex geometries and many completely unique orders in a single build at rates that will quickly pay off the purchase of the machine. In other words, the era of mass customization could very well be upon us. And, now that Xaar has taken on one of the pioneers of that technology, we could see HSS move from the lab to the world at large in the very near future.