It has but begun its growth cycle but FabZat is already proving it has a solid base to stand on. The latest game to add its plug-in — which allows for rapid three-click purchasing of 3D printed in-game characters — is the tablet series of role playing games (RPG) Graal Online from developer Eurocenter.

Stephane Portha, Eurocenter founder and CEO was enthusiastic about the possibilities: “[Thanks to Fabzat’s expertise] without any knowledge of 3D printing, we could publish our figurine shop in few days,” he said.

RPG games are a particularly good fit for character 3D printing because gamers tend to identify closely with their in-game avatar, which they personalize and even “grow” with through in-game experiences. Taking an avatar out of the game can now be as rewarding to a gamer as, in the beginning of the videogame era, it was to bring table-top gaming figurines to life in the virtual landscape.

With GraalOnline games, which are available free for Android smartphone and tablets, as well as for iOS based iPads and iPhones, the process has been streamlined to the point that purchasing a 3D printed character is not just simple, it is actually a fun experience. All you need to to is visit the 3D Shop, embedded in each of the games through the Fabzat plug-in, select the character’s size (ranging from €16.99 for 6 cm to €49.99 for 9 cm) and insert payment details. 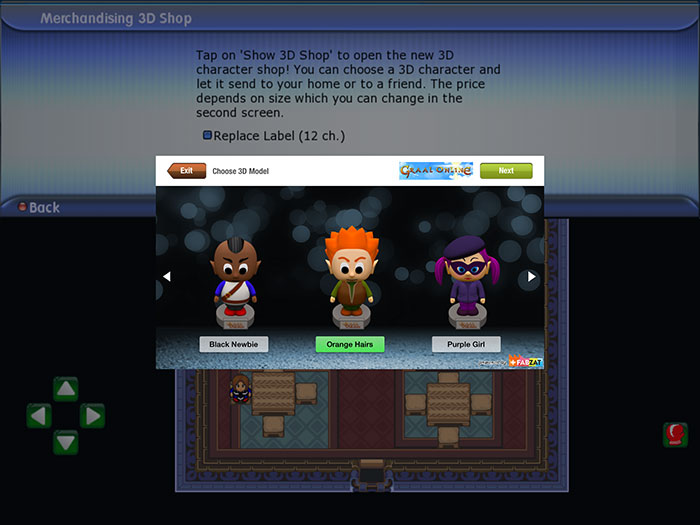 The 3D character offer now includes 12 characters from the three GraalOnline games: the fantasy world based Classic (both for iOS and Android), the street gang like Era (also for iOS and Android) and the sci-fi themed Zone (iOS and Android). Each figurine is made unique by the player’s nickname displayed at the bottom and is highly faithful to the original models, in terms of both quality and colour, with finishing carried out manually.

“The variety of the GraalOnline universes and the emotional aspects that they arouse legitimate 3D printing in high quality and a few clicks that we provide”, said Florent Pitoun, FabZat’s CEO and Co-founder.

Although GraalOnline games do enjoy a total audience of around one million players worldwide, it will be very interesting – not only for FabZat but also for the entire entertainment industry – to see what the really big players in the videogame sector, such as World of WarCraft and Call of Duty publisher Activision Blizzard, or FIFA and Madden NFL Football publisher Electronic Arts, will choose to implement. And when.