Filabot: Free Your Legos and the Rest Will Follow

Take your children’s toys, grind them up, and print something you like. That’s what Filabot is all about!

Well, so, they don’t actually do that? But the company, famous for the Filabot machine that recycles plastic refuse into usable filament for 3D printers, has released its new line of colored ABS filament, made from recycled Legos. 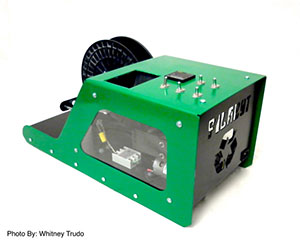 The Filabot was made possible by a kickstarter campaign back in January, 2012, in which the project raised 3x the $10,000 goal. The funding made possible the production of a desktop machine that could crush pieces of plastic up to 4 inches in size into uniform bits that would then be melted at the appropriate temperature and extruded through 1.75 or 3 mm nozzles to create strands of plastic for printing. Since the Kickstarter, Filabot has developed a great system for making 3D printing even more Eco-friendly but for those that are not able to invest in a Filabot themselves, the diversification by the company now means you can by Filabot produced filament directly. And, when you order a spool of filament from Filabot, you can return the spool holder once it’s empty, plus any failed prints, and get $5 off your next purchase!

The Filabot team has found a way to produce their filament vibrant. By recycling Legos, they’ve made it so you can order 1.75 mm or 3 mm spools in the following colors:  red, orange, yellow, green, blue, and purple. 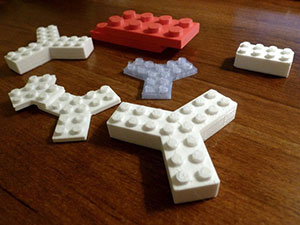 Okay, so you might be thinking that there is no such thing as recycling Legos, unless they’re broken or they’ve been chewed on too much, You know, Legos can always be used to build cool stuff. But, I think that the team at Filabot knows this. In fact, I think they’re encouraging folks to take Lego power into their own hands. Instead of relying on the parts and colors provided by the Lego corporation, you can get whatever color you want and print your own Lego pieces, even this tri-Lego piece that Filabot suggests on their site. So, in actuality, they aren’t destroying the Legos, but liberating them to be anything imaginable!