The Exo Prosthetic Leg Prototype: the Next Step for 3D Printed Prosthesis?

Industrial design student William Root has submitted a proposal and prototype to Behance for a new process for creating customized prosthesis for lower extremities.  Root suggests that the process could reduce costs, improve access, and create better compatibility. The Exo Prosthetic Leg relies heavily on modern 3D scanning and 3D printing technology, and could eliminate the costly and time consuming traditional methods of creating replacement limbs. 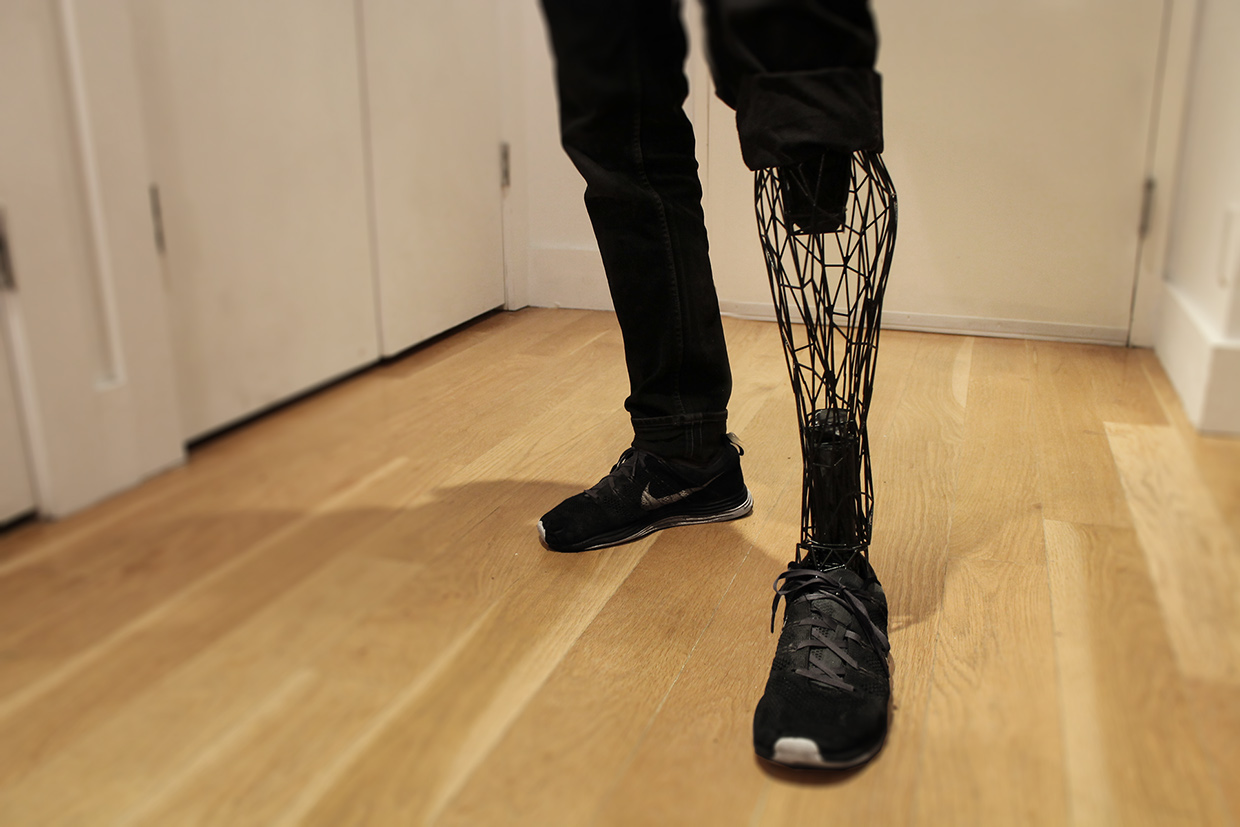 I once heard a lower limb amputee compare the process of getting a reliable and comfortable leg prosthesis to waiting in line at the post office two days before Christmas, only the line takes months to get through instead of hours. He said it was tedious, soul-crushing and a never-ending test of his patience and humanity. I’m sure he was half-joking, but because each prosthetic limb needs to be custom made for the wearer to ensure fit and comfort by highly trained – and it should be noted dedicated – artisans, it isn’t hard to imagine the process and wait time involved as being frustrating.

The process is even more delicate when dealing with lower limbs because fit and comfort need to be balanced with safety, and the mechanics involved in leg prosthetics are very expensive. Aesthetic concerns are very often the last thing considered, and this can produce unattractive and unnatural limbs that have a very mechanical appearance. Moreover, such a leg may contribute to a patient in need of a prosthetic feeling further alienated by their disability.

Root described his inspiration in his proposal: “There are over 2 million amputees in the United States with 185,000 amputations each year. Over 90% of those amputations are lower extremity amputations; millions of Americans are suffering from hindered mobility. Prostheses enable patients to regain their freedom and much of the functionality they had lost. At the same time they help to restore the amputees’ spirit and help with the psychological recovery from having lost part of oneself.”

The process proposed by Root could drastically reduce the amount of time,money and patience required for receiving custom fitted prosthetic limbs, thanks to some applied modern 3D scanning and 3D printing technology. Both the intact leg and any residual remaining parts of the missing limb are 3D scanned. This allows the final leg to be virtually identical to the remaining limb, and will often match the original within a matter of millimeters. The leg is then examined using MIT’s FitSocket technology, which tests specific tissue properties, so while designing the final product the residual limb’s internal anatomy can be considered. Here’s a video of the FitSocket technology in action:

Once all of the data has been collected it is given to a 3D designer, who combines the scans of the intact limb, the residual limb, and any required prosthetic mechanisms, like joints and motors, into the raw prosthetic model. The weight of the limb is then reduced by hollowing it out and creating a custom pattern on the surface of the exoskeleton that matches the patients style and aesthetic requirements. 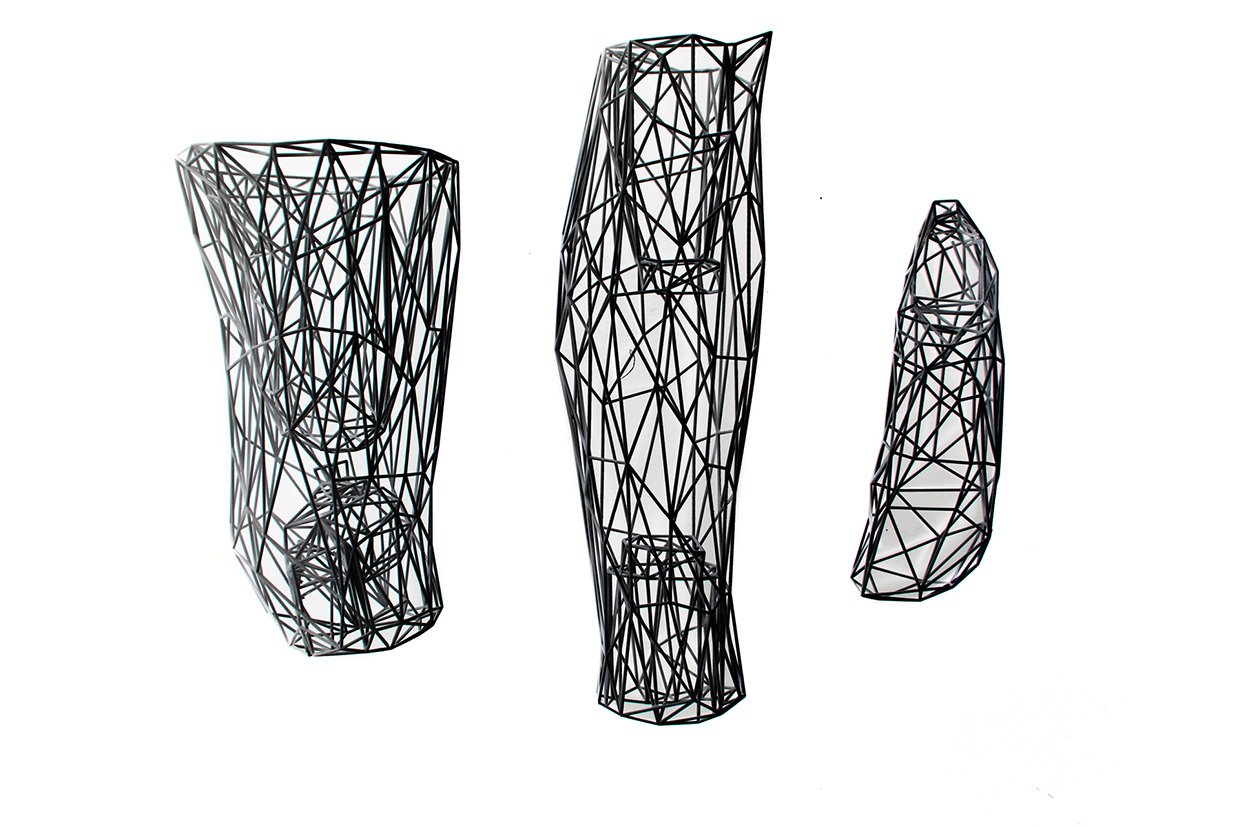 The final step is printing the model in titanium, using a laser sintering process. Titanium would be used to create the leg prosthesis because it is extremely lightweight, very strong, and a hypoallergenic metal that makes it ideal for medical applications. The leg can then be assembled and fit very quickly with custom connectors designed and 3D printed directly into the prosthetic. 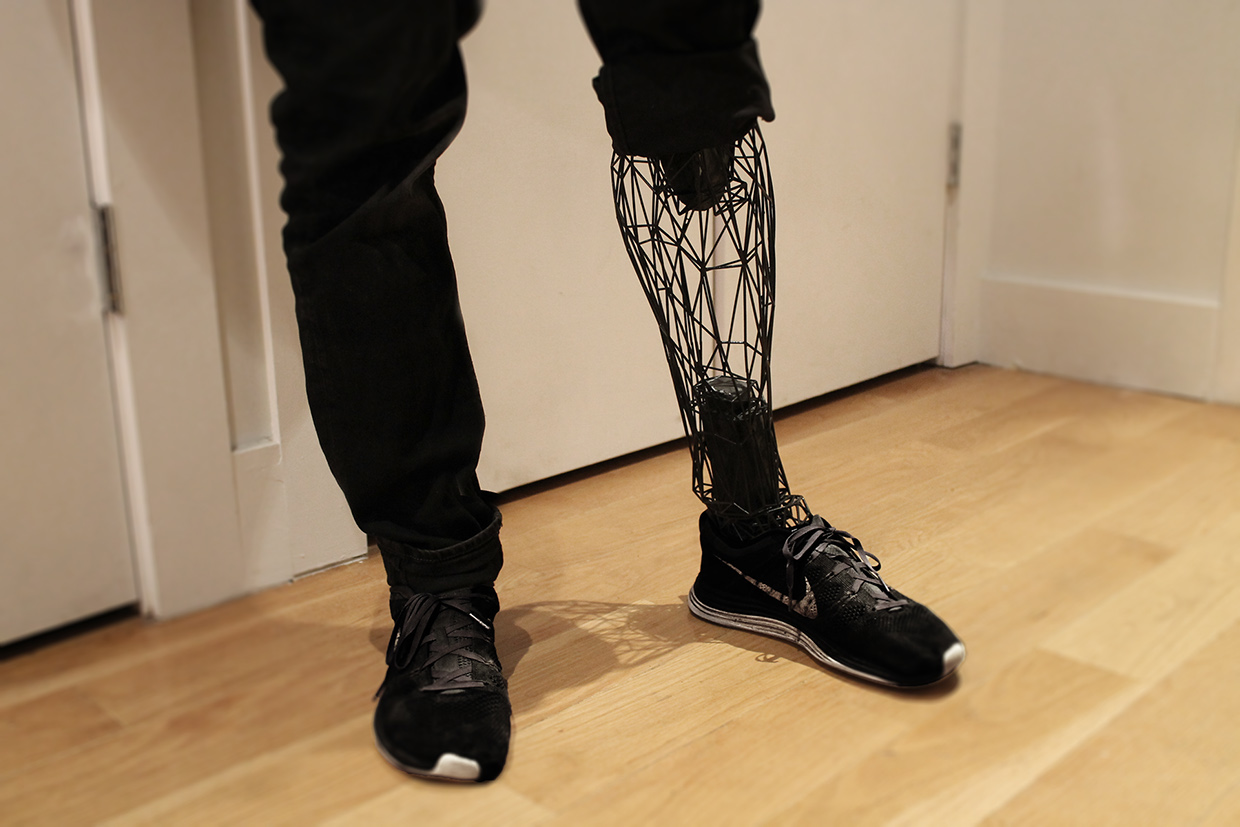 Root is currently a senior at Brooklyn’s Pratt Institute, studying industrial design and sustainability, so his prototype was printed out of Polyamide 12, not titanium, but his project is ongoing. He says that the sockets and connectors can also be 3D printed using various densities of flexible materials that would help cushion the limb and make it more comfortable for the wearer. You can read Root’s entire proposal for the Exo Prosthetic Leg over on Behance.