EOS opens new US facility to face a growing market

EOS, a company who is at the forefront of 3D printing technology and offers high-end solutions in additive manufacturing (AM), unveiled a new facility in Pflugerville, Texas. The facility was inaugurated with a grand opening ceremony, which also coincided with the year of the company’s 27th anniversary.

According to EOS, the new facility is designed to focus upon a growing market, and add to its branches that currently extend across Europe, the Middle East, South America and Asia. The new workspace will allow EOS to focus upon its growing presence in North America, which raked in $100million during 2015’s fiscal year. EOS already employs over 100 workers – including 30 field service engineers – in the US, where it has held an established presence since 2001.

“The opening of our Pflugerville facility helps us deliver even better and faster service and support to our regional customers,” said Glynn Fletcher, president of EOS’ North America division.

“EOS has a company-wide goal of continually improving systems, materials, and process solutions wherever we operate. Pflugerville’s location near Austin, one of the fastest growing technology hubs in the U.S., allows us to make connections with some of the most notable technology organizations and schools in the nation and enables a high-level, optimum response to our customers’ needs across multiple time-zones.”

The new facility opened with 30 staff, a figure which is expected to double in the first two years of operation. Whilst the facility holds many treasures at its employee’s disposal, among the most exciting is an innovations laboratory – or ‘iLab’ – where EOS’ engineers can directly interact with clients to specially tailor products. Alongside the iLab, the new space boasts a fully operational showroom that displays the full range of the company’s AM systems, including industrial grade 3D printers, and the company’s first ‘AM Ventures’ division which brings even the wackiest of their new ideas to life. 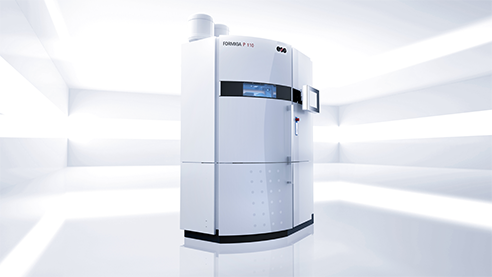 EOS Materials, also known as Advanced Laser Materials (ALM), which blends polymer powder for power-based AM technologies, shall remain at its Temple site, also in Texas. However, for the future EOS has its eye on Boston and Northern Carolina as potential destinations for future US expansion.

EOS has been a trailblazer in AM technology since its inception in 1989, a time when 3D printing was a mere fantasy for most engineers. EOS recently made headlines for providing AM solutions for Formula 1 (F1) and the aerospace industry, which have been using 3D printed engineering parts and EOS machinery for a while. For many, this is a sign of how developed and stable the technology is.

“There is a perception that F1 takes risks in the pursuit of glory. That is completely wrong. F1 is an arena where the slightest mistake would be extremely costly, both in terms of human life and in financial outlay”, said Stuart Jackson, EOS regional manager for the UK and Ireland, in an interview with Raconteur.

“These teams can’t mess around. They need standards of reliability which exceed any other industry. Maybe only aerospace is similar. Which is perhaps why aerospace was currently the fastest adopter of industrial 3D printing and a huge market for us at EOS”.

Whether the technology is viewed as being completely stable or not, there is no doubt it is being embraced by many industries as the future track of engineering, and EOS are at the start of the race.

“Our Pflugerville investment is a direct reflection of our ongoing success,” said EOS Founder and CEO, Dr. Hans J. Langer.

“Additive manufacturing is rapidly becoming a more widely accepted solution to complex manufacturing requirements across a broad spectrum of industries. We’ve recently sold our 2100th system, worldwide. With almost three decades of dedication to AM technology development, our company is committed to upholding the highest quality standards in our field.”