Professional investors and analysts regularly warn against the purchase of penny stocks, given the lack of regulation of the the over-the-counter markets.  In the post-hype-bubble world that is the current state of 3D printing, investors should pay extra heed to penny stocks that trade on the OTC. After working with tech-investment site Nanalyze on a post regarding Aussie penny stock company 333D Ltd, I’ve kept up with their 3D printing news.  And, in a new post, the site has recommended that investors stay away from an OTC company called 3D MakerJet (OTCMKTS: MRJT).

In general, Nanalyze warns heavily against investing in any OTC stock and MRJT is no different. With a site full of high quality renderings, 3D MakerJet claims to be “Committed to Supplying the best Plastic, Medical, Culinary and Powderless Metal 3D Printers in the Industry.” Their site lists a variety of FDM printers, with prices as low as $599, which are already available to order, but Nanalyze states that the Nevada-based company, which was previously named “American Business Change Agents”, has only $52,000 of cash on hand and has already spent $1.2 million. They go onto say that the company’s president, John Crippen, has a background in restaurant management and consulting and that the firm only has two other executives listed. 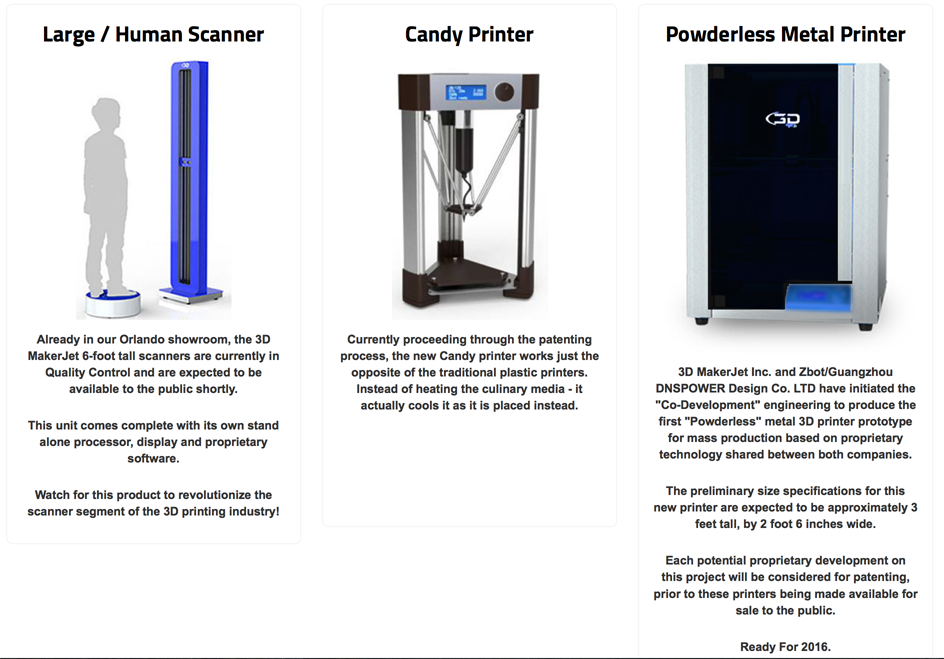 Additionally, Nanalyze points out that the printers 3D MakerJet sells are the same machines being sold by a Chinese company called Zbot, which 3D MakerJet lists as their R&D partner with whom they say they are “working on a metal 3D printer prototype for mass production based on proprietary technology shared between both companies.” Other products they claim to be developing are a “Large/Human Scanner” and a “Candy Printer”.

3D MakerJet’s website has an “Investors” page which looks like somebody took a whole 2 minutes to put it together. The page contains multiple occurrences of blatant typos which doesn’t give us much confidence in the message being delivered. 3D Makerjet appears to be nothing more than an import company selling 3D printers developed by some relatively unheard of Chinese company. None of what we’ve seen so far makes us want to invest in this company or buy their printers. With the industry getting hammered lately, there’s no shortage of bargains to be had, not only in shares of 3D printing stocks, but also in the printers themselves. There is absolutely no compelling reason whatsoever to buy shares in 3D Makerjet (OTCMKTS:MRJT) or to buy their printers. Don’t set it, just forget it. Buy a diversified portfolio of 3D printing stocks instead. Then you can “set it and forget it”.

After researching Australia’s 3D Group/333D Ltd for some time, it becomes easier to distinguish dangerous penny stocks from legitimate businesses.  Organovo, for instance, began on the pink sheets and later shifted over to the NYSE and their products have been described in great detail on their site from the beginning. However, if you look at 3D MakerJet or a company like Changing Technologies, which Andrew Wheeler discovered to be potentially fraudulent, you’ll notice that the site contains CAD models of promising technologies with little evidence to back them up.  Instead, hype words like “3D printing” are used to attract investors unfamiliar with the industry to jump into a stock bubble. Pumping up the price of the stock, the founders of the company will cash out, leaving it to be even more worthless for those investors who thought they were buying into a good thing.

How is that different from established, multi-million dollar companies? Well, it shouldn’t be, but there can be deception at all levels of an industry.