At the moment, dolls are painted and finished after the basic forming process to ensure a quality finish. This is a complex and inefficient process, but Disney may have the answer and it’s a twist on thermoforming.

This is a staple process in the plastics and packaging industries, but stretching heated plastic over a mold is limited right now. That’s especially true when it comes to adding a design. But Disney has found a way to exploit 3D scanning to create a distortion map, make a mold and then to use a film with the texture or coloring already in place.

We simply didn’t have the computing power to predict the stretch of the material and how it would look when distorted on to a mould. But now Disney believes it has cracked this code and has released a video showing just what is possible with a pattern and pre-printed texture and design on a molded face.

With a number of curved and complex surfaces, a face is an exceptionally difficult area to map. If Disney can do this, as well as the tree trunk and loaf of bread that it revealed, then it can add a great deal of detail to its thermoformed models. That means it can provide more advanced dolls, figurines and other merchandise in the future.

Technically it’s a process you can do at home as well, using a laser printer to produce the desired pattern on transfer paper, before using a thermal press to transfer the print to the plastic sheet. You can then thermoform this plastic to a gypsum mold, but without the computer assistance of Disney’s advanced algorithms, then you might have to experiment to get the perfect result.

Disney still makes the mold from heat-resistant gypsum, which must then be precisely placed on a calibrated bed for the whole process to work. Robots could potentially handle this, of course, but Disney is surely working behind the scenes on streamlining the process further. If it can then even tomorrow’s packing could change beyond recognition. 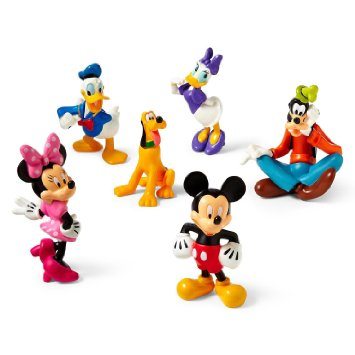 Merchandise is a massive business

It’s easy to see why Disney has invested heavily in 3D printing and other high tech manufacturing techniques. Its merchandise sells around the world and the characters from Frozen, Mickey Mouse, Donald Duck and the rest of the Disney gang generated more than $40 billion in 2014. So anything it can do to streamline the production process can have a significant impact on its profits.

Disney has invested heavily in 3D printing and recently revealed what it described as a 3D photocopier that essentially scans and copies an item without any structural supports.

That technology will work for a vast number of industries and this new approach to printed thermoforming is no different. The predictive computing power gives Disney the power to apply a level of detail that we just haven’t seen before and the media giant has shown us a totally new approach an age-old process.

We think there’s going to be a lot more coming from the home of Mickey Mouse.