3D printing has time and again proven a preferred method for artists, architects and designers who wish to incorporate science and mathematics into the production of physical objects. Due to the ability to translate CAD files into a reality, 3D printing opens up the unique possibility of making 3D models, based on algorithms and/or patterns found in nature, and making them into physical objects. For this reason, Matsys, Oakland design studio founded by architect Andrew Kudless, has relied on additive manufacturing. 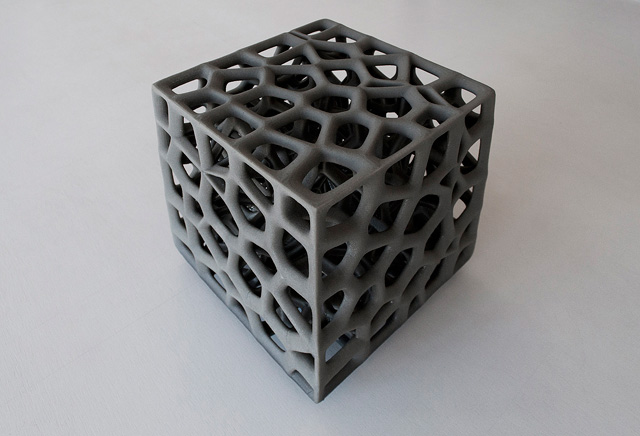 Above, you’ll see SCIN Cube. Submitted to London material research center, SCIN, the cube is an exercise in illustrating the design studio’s approach to art, design and technology in the form of a box. The block is made from 3D printed concrete, fabricated by none other than San Francisco-based Emerging Objects, to represent, according to Matsys,

…the reoccurring presence in our work of cellular solids, a transmaterial grouping characterized by high strength to weight ratios. The cube was designed using a network of digital cellular bodies that are first relaxed to produce a more uniform field and then structurally differentiated in relation to their distance to the outside surface. The inner core’s cell edges are extremely thin and fragile yet are protected by the multiple layers of increasing more robust edges closer to the cube boundary.

The material consultancy was able to aid Matsys in the realization of their philosophy of “explor[ing] the emergent relationships between architecture, engineering, biology and computation.” 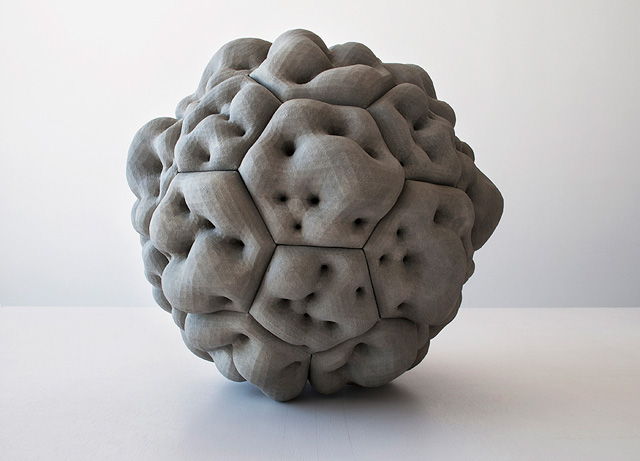 This isn’t the first time that the firm has worked with Emerging Objects. Previously, Kudless and his gang developed the Seed (p_ball). Ultimately, the Seed would be a large and mysterious concrete orb placed in the Redwood Grove at the UC Botanical Garden, but, first, a smaller prototype was manufactured by the material consultancy. The prototype is a piece of artwork in itself, consisting of “32 thin-shell fiber-reinforced concrete panels that are based off of plaster patterns made from casting liquid plaster into fabric forms.” 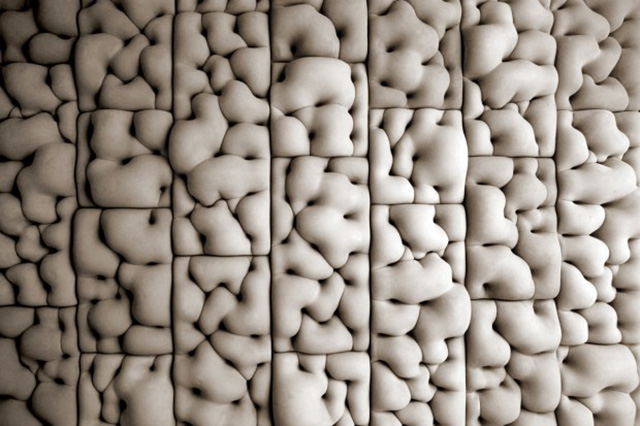 The Seed is part of a larger series that, one might say, culminated in the construction of P_Wall(2013). Though not 3D printed, it uses similar constraints placed upon the designer to generate unique forms.  By using fabric covered panels with specific indentations that are then filled with plaster, a play between natural forces and the impulses of the designers are pitted against one another:

P_Wall (2013), part of on-going research by Matsys into the use of flexible formwork (see earlier projects in the series here,here,here, andhere), celebrates the self-organization of material under force. The form emerges through the interaction of the elastic fabric formwork and the liquid slurry of plaster. The designer has control over the locations of the constraints on the fabric which inform the overall form of each panel, but the specific curvature is determined solely by the system finding a state of equilibrium between mass and elasticity.

This iteration of P_Wall is installed at the FRAC Centre in Orleans, France, but you can find a previous form at Ohio State University in Columbus, Ohio.

Based on a look at Kudless’s other works, I don’t believe that this will be the last time he works with Emerging Objects. Throughout his designs, you’ll see a number of structures made up of hexagonal shapes that both mimic forms found in nature, while simultaneously elucidating the underlying mathematics of the natural world. And, because Matsys isn’t the first firm to combine CAD and 3D printing to represent such concepts, it’s likely that they won’t be the last either.