F-Electric, a highly-conductive plastic 3D printing filament, has just hit the market. This new functional 3D printing filament is courtesy of Seattle-based Functionalize and the vision of its creator, Mike Toutonghi. F-Electric is Functionalize’s first major contribution to the 3D printing world and it’s a pretty big one. This electric filament will allow users to print power connectors, buttons, and circuits embedded into their plastic models.  It opens the door for a whole new world of innovation and creativity.

Functionalize announced that after months of modifications, their final product’s mechanical strength was better than its beta material and virgin PLA, and would have a resistance of 0.75 ohm*cm. Not only did Functionalize live up to its name by offering the public a filament with a function, but it also beat its original electrical specification by 25%.

Toutonghi, CEO and Founder of Functionalize, announced at the recent Additive Disruption Summit in Santa Clara, CA, that they were, “Super excited that we were able to get our process into production and ship in March. More than that, we’re pleased to deliver a product to customers that exceeds both our electrical and mechanical property goals.” 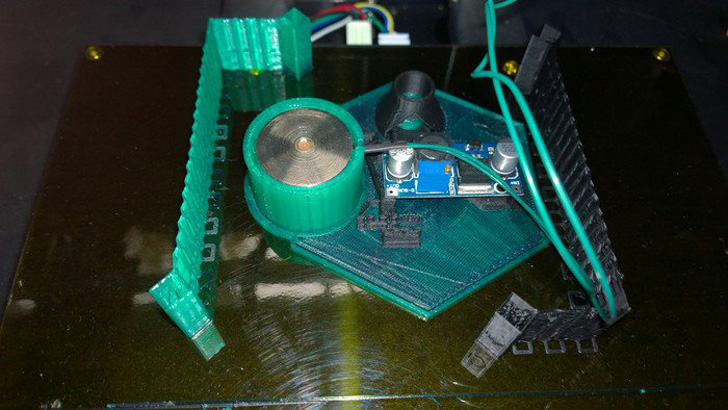 F-Electric filament, apart from allowing amateur time travelers to pump their 3D printed DeLorean models full of 1.21 gigawatts of juice, can also produce lighted wearables, flashlights, circuit boards, and more. Toutonghi continued, “Imagine the possibility of today’s 3D printed prosthetics being able to sense pressure through conductive pads in their fingertips, printable robots that people could share and improve, or active wearables as creative as their maker.”

It’s amazing what the advent of a new material can do to jump-start innovation. Already their have been some great 3D printing projects utilizing the new material, including a fully 3D printed robot design by RepRapPro Ltd. CEO and founder, Adrian Bowyer.  There have also been other conductive filaments on the market, including one from Proto-Pasta and the new Graphene-PLA composite from Graphene 3D Labs.  Bowyer writes in a blogpost on the robot project and Functionalize’s conductive filament that, “The ideal would be a conducting plastic, of course, because that would print just like the plastics we all now use every day.   We have done our own experiments on this, and there are commercial conducting plastics available.  But they all have very high resistivities.  This makes them useless for – say – running current to a motor. But recently a very interesting new conducting filament called F-Electric has been announced by the  company Functionalize.  It has a resistivity of about 1 ohm-cm.  This is still higher than a metal, of course.  But it’s low enough to do something useful with.”

As Toutonghi and Functionalize look to the future, the CEO says “We’re excited to be at the beginning of this trend. Shipping F-Electric is a historic milestone for Functionalize for our company and our customers. We’ve provided a new tool, and I can’t wait to see what creative people can do with it.”