A student from Breckenridge, Michigan has helped a young boy from Muskegon Heights feel like a superhero, by 3D printing a Captain America inspired prosthetic hand.

Austin Brittain enrolled on a 3-D creation course at Central Michigan University, and has a particular interest in working with cutting-edge technology, so it was no wonder he became a mechanical engineering and technology student, let alone jump at the opportunity to create a useable, prosthetic hand for an actual patient. “Ever since hearing that you could 3-D print prosthetic hands, I was blown away by that application,” said Brittain,  “To be able to actually do that was really an amazing moment for me.”

Michael Bell, was the patient in question.

At 8 years old and missing a left hand due to Moebius Syndrome, his teacher, CMU alumna Sarah Volker noticed that the boy was struggling with some of his tasks in his school classroom.

After researching about ways to help Bell, it wasn’t long before Volker stumbled upon 3D printed prostheses. She then discussed the idea with her husband Michael Volker, and Greg Stahley, the art and design faculty members for the university. The idea was then shared with Brittain.

The hand was created using technology from the university’s Makerbot Innovation Center, as well as templates from E-nable, who print prosthetic hands for people in need. The hand consists of a gauntlet which holds onto his wrist, a palm piece and fingers which flex when Bell flexes his wrist. The aesthetic choices for the Bell’s new hand were inspired by his favorite superhero, Captain America.

“He felt like a superhero, and that’s really cool for him because he wasn’t exactly in a position to feel like that every day,” Brittain said.

And at a grand materials cost total of under $10, it certainly didn’t cost much for Bell to have his superhero dreams come true. The total expenses were under $100, which is a fraction of the cost of custom-made prostheses, which usually cost thousands of dollars.

“Fully assembled, ready to go, and Michael’s family didn’t have to pay for any of that,” Brittain said. “That was really powerful for them and shows what the university is capable of doing with their resources, as far as helping people out.”

Both Brittain and Michael Volker are excited by the results of the project, knowing that the 3D printers used were able to help people.

“It gave us an opportunity to show what the 3-D printers can do for real people, not just to study,” Michael Volker said. “I think it would also be good for people who are interested in studying here, at CMU and in the art department, to see the kind of world that the 3-D printer can open up.” 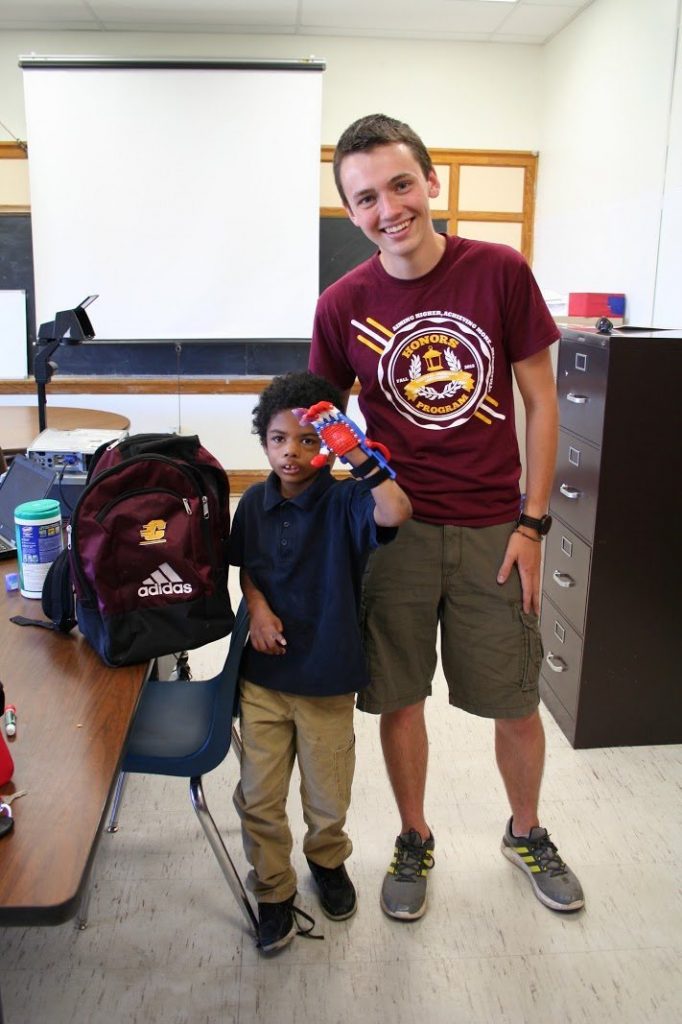 Bell’s mother, the school superintendent and special education director and his schoolmates were there to watch as he received his hand on his last day of school.

The project doesn’t quite end there either, as Brittain plans to keep in touch with Bell and his family to ensure the hand is working properly. He has also given the family information on who to go to in case they need assistance with the hand’s maintenance, as parts will need to be upgraded as he grows up.