An ambitious full-color 3D printer has launched on Kickstarter. It has smashed its target in days and now the RoVa4D promises to give you complete creative freedom with your additive manufacturing.

The RoVa4D comes with five different filaments that feed into one printer head and combines cyan, magenta, yellow, black and white filaments. Theoretically this gives you complete control over and infinite number of colors within a single print, which would put an end to printing individual parts and assembling them afterwards.

You can even go for hard separations or gradients. This is a really big deal and, if it works, it’s a nailed-on hit.

Switching colors out in the bin

The clever bit is the way it purges filament into an integrated bin, much like a 2D color inkjet printer. Alternatively, the switch can occur in the infill area of your print if there is enough space in the void. It also features a mixing chamber to combine the melted filaments for a specific color with a head that can produce 410 degrees Farenheit. An advanced liquid cooling system should keep it under control, too.

The RoVa4D comes with three separate hot ends. The first can print in any color or shade, the second is for flexible materials and the third is focused purely on supporting soluble material. The makers even claim you can even switch between all three heads in a single project.

Full color has remained an enigma in 3D printing. This printer just looks complex, which is potentially a concern for a relatively low budget effort that came to Kickstarter looking for $25,000 Canadian to get to market. Innovation is one thing and this printer looks incredible, but it’s one of those breakthroughs we’re really going to have to see in the flesh to believe.

Blend materials as well as colours

It doesn’t even stop there. As well as blending any CMYK color, the team can also blend different types of PLA to create a specific tensile strength or flex. Just like the colors, the printer should be able to do straight separations or create gradients. So we really could control flex and alter the resistance of a print along its length. It’s exciting and troubling in equal measure.

The RoVa4D also comes with a choice of filament packs and the team behind this extravagant printer haven’t even played it safe there. If you take advantage of the early bird offer and order your printer for $4,500 Canadian dollars, or $6,500 for one of the early beta units, you can specify a set of filaments that include carbon fiber, transparent or metal filled filaments.

This filament will undoubtedly be made of metal-infused plastics that are removed during the print process and in post processing to leave metallic or carbon-fiber look products. This is not particularly groundbreaking anymore, but it’s still an added layer of complexity. As is the 30.5×30.5×30.5cm print bay. 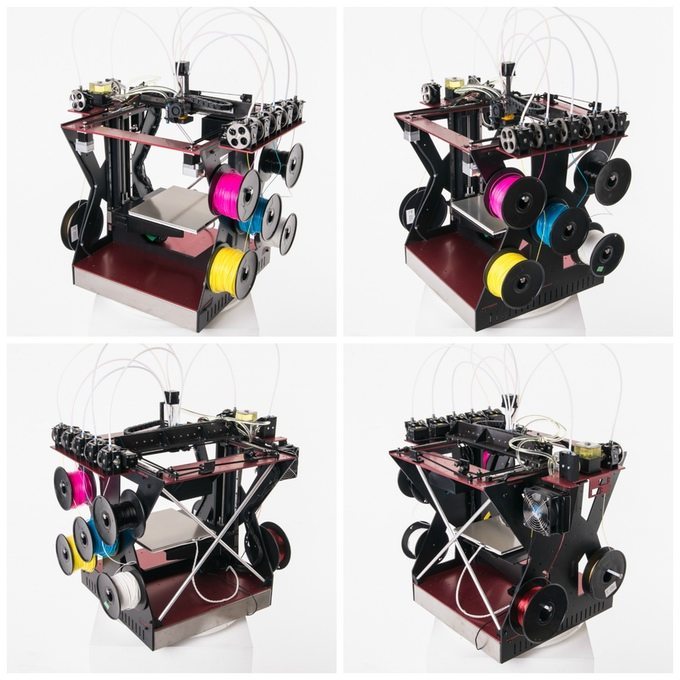 The company has delivered before

This is not ORD Solution’s first five-head printer, though. In 2013 it ran its first successful Kickstarter campaign for a five extruder 3D printer and it followed up with the RoVa3D in 2014. The RoVa4D is, in fact, the company’s sixth generation 3D printer and it has met with an enthusiastic response. Indeed, it’s good to see this level of optimism on Kickstarter.

It smashed through that $25,000 marker and raised $60,000 with 25 days to go, so RoVa4D will have to maintain its reputation for delivering the goods. The company clearly knows there will be sceptics and it was keen to push its track record for delivering printers on the crowdfunding page.

This machine is not cheap and the $4,500 Canadian will skyrocket once the company starts to deliver the printers, with an estimated retail price in the region of the $6,500 quoted for three-month delivery of a beta unit.

We’re excited to get our hands on one of these printers to see what it can really do. If it performs, then this Kickstarter minnow will become an instant icon. We really hope it does.

Check out the Kickstarter campaign here.