If you follow the 3D printing work of Make:‘s Caleb Kraft, you’ll know that he creates custom gaming controllers for people with disabilities.  These have included a unique Xbox thumbstick for a player with muscular dystrophy and a completely novel controller for another Minecrafting friend with MD.  Today, Kraft posted an update on Make: detailing the creation of some custom foot controllers for a friend who can’t use his left hand, but can use his feet.

In a series of videos, Kraft describes the process of designing custom controllers for his friend, Jesse, from scratch. While Jesse has use of his right hand, for which Kraft crafts a special one-handed controller, he doesn’t have the use of his left hand, sending Caleb in the direction of Jesse’s feet.  By designing an optional foot controller, Jesse can either use a single Xbox device with one hand or he can opt for 3D printed foot controllers with a built-in D-pad and an analog stick.

To pull it off, Kraft uses DesignSpark, creating a face plate for the D-pad buttons and a base capable of being adjusted to the proper angle for Jesse’s feet.  He then designs a casing for a thumbstick, before 3D printing it on his LulzBot Mini. The buttons and thumbstick are each connected to their individual boards, which he purchased from Adafruit. 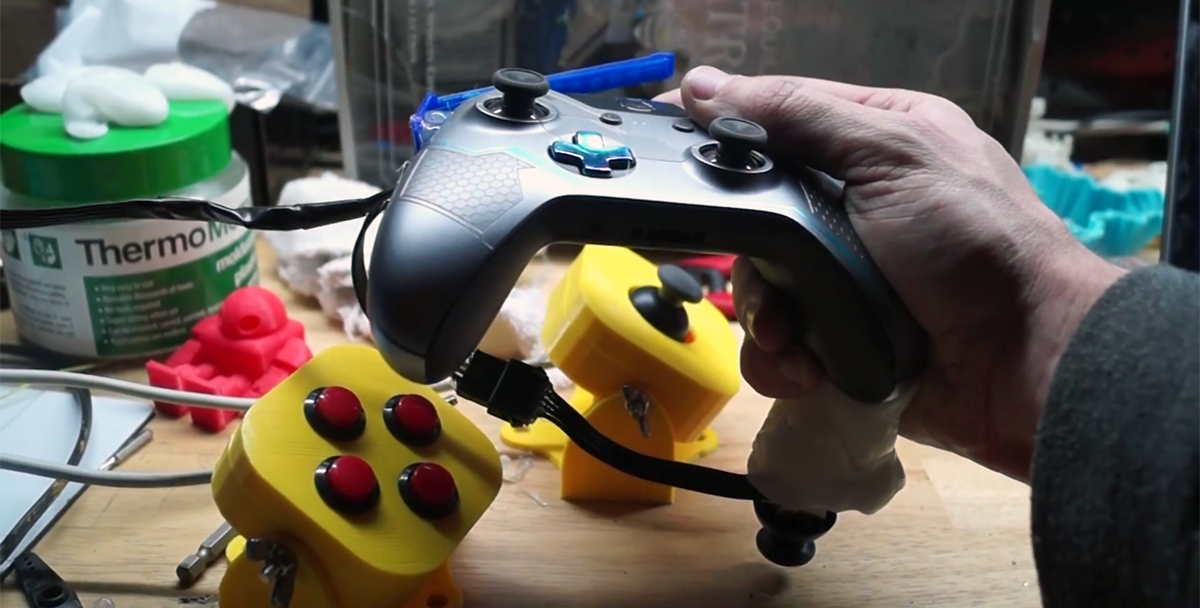 The complete video guide is fascinating to watch, not just for the hacks and the noble cause, but because Kraft has to do all of this in the wee early hours of the morning, before his family wakes up. Drama? Not quite, but most of us can probably relate to being forced to balance work, home life, and hobbies across the limited hours of the day.  Naturally, all of the designs for his controller mods are available for download on Thingiverse, altogether demonstrating how the 3D printing community is hacking the mass manufactured world to create a better world for unique individuals.