Bumper Sticker in India Reads: “My Son Dropped Out of High School and Invented his Own 3D Printed Technology at 15”

My wife, her dad and I were talking with my wife’s brother, 16, about high school. It became clear that he wasn’t a fan. The topics in class were boring and didn’t apply to the world outside of the school’s bubble. Most importantly, all but one teacher just didn’t engage him with interactive lessons, making the information more difficult to retain. This isn’t an isolated problem, but one faced by young people the world over. The decreased price of electronics coupled with the freedom of information on the internet has given some students another way of learning that is free from standardized tests and overworked teachers. Angad Daryani, a fifteen-year-old in Mumbai, India, has dropped out of school in favour of teaching himself electronics and building his own line of RepRaps.

According to the teenager, “Kids don’t learn anything [in school]. I had no satisfaction that I knew things, I couldn’t apply anything I had learned to real life. I quit the formal pattern of studying and am now being home-schooled.”  Now that he’s taken his learning into his own hands, Daryani has developed and been a part of some amazing projects. For instance, probably the coolest device he’s worked on, in my opinion, is the Virtual Brailler. With three other students at the MITEngineering the Eye development workshop that Daryani attended, he built a prototype for a device that converts English characters into Braille using 3D printed components, a microcontroller, an actuator and some software.

The Brailler isn’t open source, yet, as the group is planning on selling the product as affordably as possible, but Daryani is a big advocate of the Open Source Movement, saying:

As a kid, we have always learnt that sharing what you have always increases the satisfaction of owning something. And that’s true! When I got into project making and wanted instructions or help of any kind, I just went on the internet and got all the help I needed! And that’s all because of the help I received from the Open Source community. If people hadn’t uploaded their designs, my knowledge would have been limited to what I already knew. I am thankful to all those people who have directly or indirectly helped me. As a continuation of what they did and are still doing, I release all my projects on this website as OPEN SOURCE HARDWARE AND SOFTWARE PROJECTS and so, people all over the world who want to build the projects I have built can do the same!

Naturally, due to his love of open source and for symbiotic sea life (“I research on the behavior of sharks and study the symbiotic behavior of aquatic animals.”), Daryani found himself building a RepRap. Realizing that those around him were relying on importing 3D printers from other countries, Dayani wanted to sell his own, explaining, “After taxes that comes to Rs3 lakh,” about $7,000, “whereas the cost of making it is less than Rs30,000,” about $500, “We are wasting foreign currency by importing these things…I want to change that.” 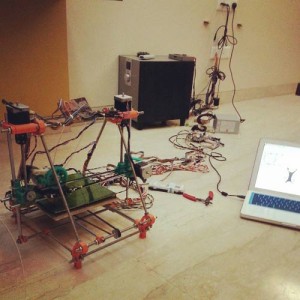 Daryani now sells Prusa i3 kits, mostly to engineering students, but he’s also planning on releasing his own 3D printer line, SharkBot. The inventor has boasted that the SharkBot will be “the fastest and most robust desktop 3D printer that can print any material except metal.” And, if Michigan Tech has built a low-cost metal printer, maybe Daryani will throw that in there, too, I hope.

The teen, admittedly, has been tinkering since he was 8, when he built his first humanoid robot.  He built a remote controlled hovercraft through watching YouTube videos when he was in Class 6, which I believe is the equivalent of the 6th Grade in the US.  Daryani has been taking apart and reassembling his toys, copying the projects from UK craft show Art Attack, and taking lessons outside of school for years. He’s even shown his work to APJ Kalam, the former president of India, and Ratan Tata, of the Mumbai-based Tata conglomerate. So, it’s possible that your average teenager won’t drop out of school just to start their own business selling portable speakers, headphones and 3D printers or building inventions that can help the blind, but maybe Daryani can act as an example of what the average teenager could be if we provided a school environment that is student centered, where we treat kids as young geniuses instead of pegs to fit into slots as we see fit.