Anouk Wipprecht’s Electrifying 3D Printed Fashion – You Have to See it to Believe It!

Fashion had a good run for a while, until it culminated in the electrifying (partially) 3D printed ensemble of Dutch designer Anouk Wipprecht at the Bay Area Maker Faire. Unable to top her Faraday dress, fashion designers the world over have retired and resorted to watercolors, furniture restoration and French cooking, as they reflect on their careers. Meanwhile, Wipprecht has been established as Fashion’s reigning queen forever. 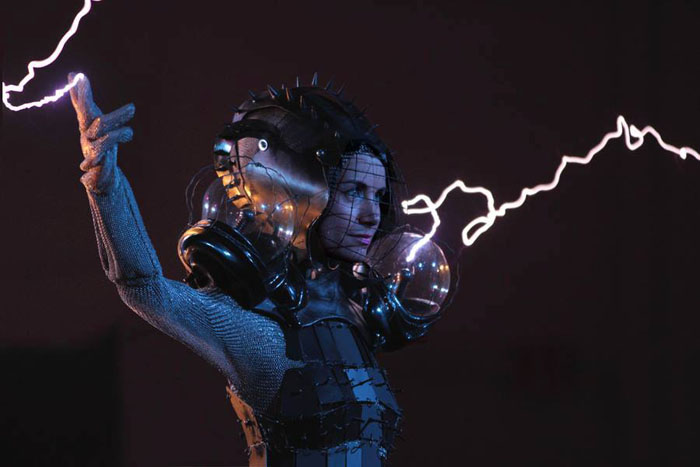 After being introduced to them through a mutual friend, Wipprecht worked with the band ArcAttack to design a dress to specifically work with the band’s unique method of music created by Tesla coils. She flew to the band’s hometown of Austin, Texas, to hash out the details of how to make an item of clothing that could interact with their equipment. Wipprecht explains in her Instructable describing the project, “The challenge was to create an iconic design that would hold up to the power of high-voltage, low-current, high-frequency, alternating-current electricity.”

She goes onto describe the testing process with the band:

It’s a bigger process than just gathering the right materials or colors and constructing it, so I flew into Austin, Texas, where ArcAttack’s builder shop is housed. It’s “form follows function” in this case — a continual back and forth between design and role or purpose, where function was alpha, above all: multimeter testings of constructed connections, metal and aluminum materials that were ordered and mostly turned out not to reach the required conductive capabilities, paint jobs and coating that isolated too much of the created grounding structure.

It’s always trial and error when you are trying to do something new — and by testing it time after time, you secure your best options. When it was finally time for fitting and testing we started with firing up the coils lightly and built it up step by step. If the arcs raise through your heart, you might not live to tell, so if anything, this process was done very carefully. ArcAttack have been doing this for over 10 years and are specialists in their field.

When it came time to make the actual Faraday-cage-style outfit, Wipprecht used all of the Autodesk 3D design tools available at her Autodesk residency in San Francisco. 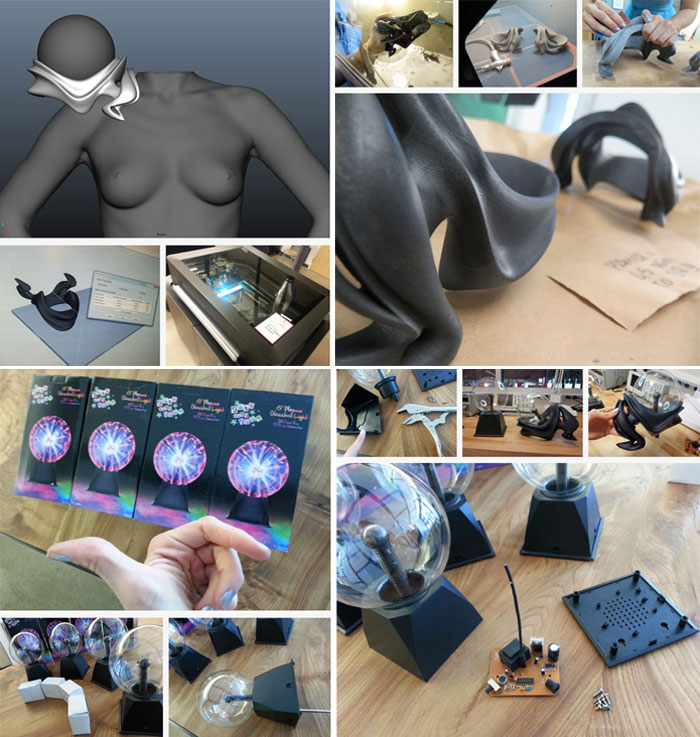 With a scan of her body, she and the 123D team at Autodesk used Maya to create individual panels over the scan. 123D Make was then utilized to transform the individual panels into a flat 2D sheet, making small modifications in AutoCAD. The 2D layout was consequently cut out of a sheet of metal with an Omax 60120 water jetting machine at Autodesk’s Pier 9 workshop. All of this only took a few days to complete, but connecting all 96 metal panels together took a bit longer. Finally, Wipprecht’s shoulder pieces, 16” spheres to be filled with nitrogen to create the electro effect, were modeled in Maya and 3D printed on an Objet500 Connex 3D printer with the help of Niccolo Casas. You can see the designer and a member of ArcAttack test out the conduction of the orbs with a mobile Tesla coil gun:

Once the ensemble was complete, Wipprecht and ArcAttack showed it off to big audiences at the 9th Annual Bay Area Maker Faire. The designer says that, on stage, she developed an “intuitive understanding” of free-flowing electricity, saying, “Although I fully trust the whole team, the first time that the arcs hit me fully on stage was very scary, but incredibly interesting being in contact with such a free and pure form of electricity. Each coil can peak at about half a million volts, so I was basically surrounded by close to a million volts.” Here is the event from the designer’s POV, via GoPro:

And, as if being electrocuted once wasn’t enough, Wipprecht says that this dress is only the beginning, explaining, “[F]or the next one, I would like to see it be less bulky, lighter, and more wearable. Every good invention needs testing and upgrades, and with the research we have in our pockets now, I started dreaming of how the next version can look. We have some cool things in store.” Later adding:

Working with the unstable (instead of controlled) nature of electricity at higher voltages inspired me to think of ways to energize uncontrolled effects — interfacing in a direct way with electricity instead of enclosing and leading it. This collaboration gave me the possibility to have electrical energy being broadcast without wires, through the ground, while energizing the plasma balls without any onboard circuitry. A good first introduction of possible wireless empowering, although a very radical and loud one.

Of course, none of this would have been possible without the inventor of the Tesla coil, Thomas Edison. Just kidding!

For more insight into the project, read her Instructable, titled, “How to Get Fashionably Struck by Lightning”.