Bre Pettis once told me that he started MakerBot because he could not afford Stratasys’ 3D printers and decided to make his own. That paid off: not only did he get the 3D printer he wanted but he ended up selling his company to Stratasys for $400 million. Now the cycle continues with New Matter, a start-up that has just raised over $400K in 4 days to bring its MOD-t $249 3D printer to the market.

Apart from the revolutionary price point – which for the first 500 Early Bird Indiegogo supporters was as low as $149 – the New Matter plan is similar to MakerBot’s: they are going to create a software based online network of designers and designs, but they also intend to make every design specifically calibrated to get standardized results out of every print, also by implementing their own New Matter Store file format.

There is little doubt in my mind, though, that until we see the system fully tested and working it will be difficult to express an opinion on its real potential. MakerBot took a few years to get Thingiverse to where it is now and it still could use a lot of improvements in terms of standardization. Until then, the real innovation promised by MOD-t remains the price point. And the question is: will they be able to deliver on it?

At the time of writing the company collected $470K on 1800 3D printers (three supporters already purchased the 10+1 3D printer package for $2.490) and there are still 31 days to go. Not as fast as the recent M3D campaign but quite successful nonetheless, especially considering that Indiegogo does not have as large an echo on the media as Kickstarter does.

Lately it seems that if you want to make a quick half a million bucks all you need to do is set up a crowd funding campaign for a low-cost 3D printer. You are guaranteed to get amazing amounts of generalist media coverage, tons of enthused fans that just cannot wait to get their hands on a 3D printer but cannot afford the current prices, and recognition for taking 3D printing to the masses. Making that money count and keeping your backers happy has proved a little more difficult. 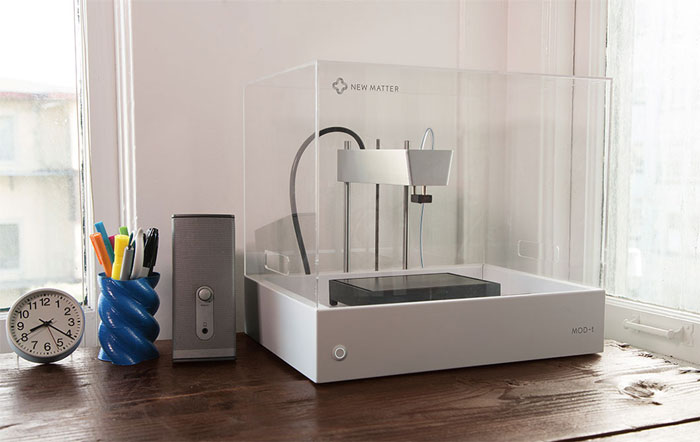 What allowed the New Matter engineers to keep the price down is a new 2 axis-motion system that simultaneously moves and supports the build plate using very few components, making the prints more consistent and the component costs much lower. According to the New Matter team the MOD-t has already been tested extensively, it even looks great and the comparisons with other similar 3D printers play in its favour, not just price wise.

It has a larger build plate than the $1300 Replicator Mini and the $349 M3D Micro. Its build volume is lower than that of another such revolutionary priced 3D printer, the Buccaneer which, however, climbed to $899 after launching on Kickstarter for below 400. Whether New Matter will be able to keep the price down even when (and if) it goes into mass production remains to be seen. However the time of $200 FDM 3D printers seems to be really upon us: it could be around this time next year, when the first MOD-t’s will be shipped.