For one the price, at USD$199 for early birds and a regular price of $299. For another, ease of use, with auto-levelling and auto-calibration. Within 48 hours the campaign for the printer had passed one million dollars. The funding mission now rides alongside Formlab’s Form 1 and Pirate 3D’s $1,438,765 Buccaneer campaign as the fastest selling home additive manufacturing machines in history. And they’ve still got 28 days to go…

Co-developers Dave Jones and Mike Armani took the visual aesthetics first approach to the design of their 3D printer: The have a compact unit, single piece shell, and vibrant design. The Micro comes in a range of seven colours, much like the iMac G3 that broke the mould for how attractive and appealing a personal computer could be, moulding a plastic frame available in splash of primary and secondary colours somewhat goes against the current convention for what a personal producer looks like. The black or grey box motif can be seen everywhere in the 3D printing industry at the moment, from MakerBot to 3D System’s Cube, the Ultimaker 2 to the Solidoodle. The rainbow of colour options appears to be proving very popular. 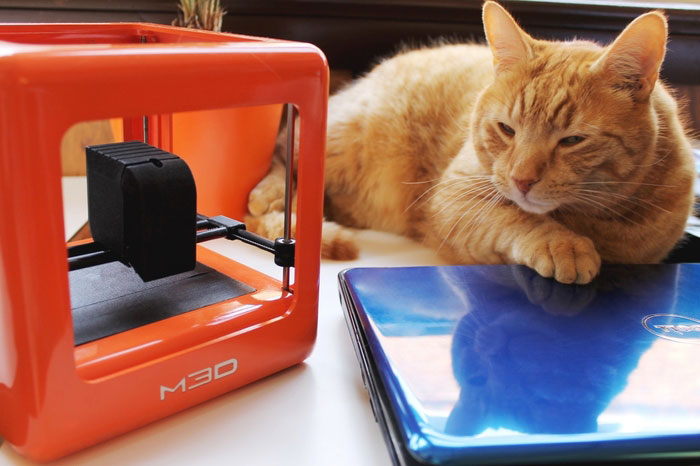 The device has some lesser quality components, but boasts an advanced ceramic printhead, which heats the filament more uniformly for lower operating temperatures and higher-quality more uniform prints. M3D also re-thought the motors and drive system used to move the print head, which uses, in the words of Mike Armani, “a very different kind of motor,” which is more power-efficient and cheaper than the stepper motors used in most 3D printers.

The Micro 3D Printers other notable specifications include compatibility for a range of filament: ABS, PLA, nylon, chameleon, as well as M3D’s micro-filament spools or standard 1.75 mm filament spools. The printer works via USB with all the main PC platforms: Mac, Windows and Linux. The popular little printer also includes a removable ABS-bonding Print Bed. Advanced users can use the expert settings, as well as other software such as open-source slicers.

You can jump on board the Micro 3D Printer craze over at their Kickstarter campaign, which you can find by follow the link here.