Hype-wise, it seems 3D scanning is “the new 3D printing”. New product launches are hitting the market at increasing frequency, and while some are clearly more thoroughly and comprehensively thought out, others seem more like they were quickly thrown together to jump aboard the scanner train before it’s too late – without even looking at where the tracks actually might be heading in this market, which is still in its very infancy. This past weekend here on 3DPI we featured a video accompanied with a brief intro to Dimbody, a new 3D desktop scanner project currently looking for funding on IndieGoGo.

Dimbody, not unlike the other scanners targeting consumers and makers,  (particularly those still in their prototype phases) seem to strongly divide opinions. This is mainly based on the potential user’s preferred attributes – typically speed, accuracy/resolution, size limits, sometimes convenience/ease of use, but nearly always the price. Seems quite obvious, but compared with the 3D printing market, the 3D scanner companies have not yet clearly positioned themselves to opposing camps with actual relevant and differentiating factors. Indeed, these potential users are doing it themselves, to an extent, based on preferred tech and other aspects in 3DP – so the assumed consumer demand is currently clearly driving the supply in the world of 3D scanning. In other words, there isn’t a company out there yet, who would use a more hierarchical visionary approach and proclaim to have the ultimate 3D scanning solution for the users, rather they are all more or less trying to offer similar solutions that would potentially tackle most of the market. So is Dimbody any different in this case? 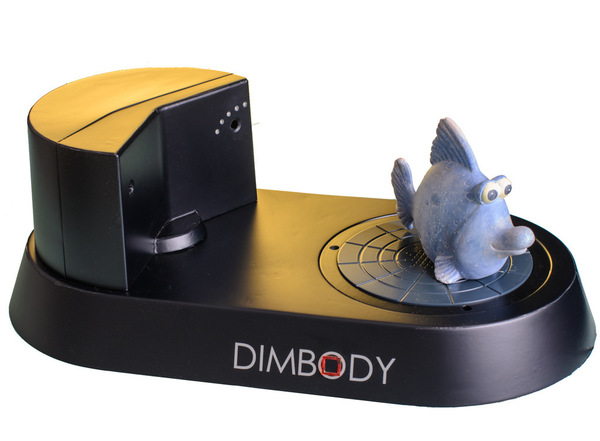 Published specs – though not always telling the whole truth (ie they generally point to best outcomes, and ignore problems) – are a good place to start. So let’s take a look at some key figures – the easily measurable four from the five mentioned. If Dimbody is able to hit the claimed accuracy levels, it’s clearly ahead of the notable key competition – the recently released Makerbot Digitizer, Fuel3D and the Matterform – with its maximum resolution of ±0.1mm (compare with Matterform’s 0.2 mm and the Digitizer’s 0.5 mm). The same story continues with the size limits, where Dimbody’s 300 mm x 300 mm is larger compared with Matterform’s and Digitizer’s ~200 mmx 200 mm mark (Fuel3D, using a handheld approach, is obviously not relevant regarding this spec). The speed of the scanning process is highly dependent on the desired accuracy, but with Dimbody, it ranges from 24 to 8 minutes (with the quickest option resulting in ±0.4 mm accuracy.), whereas the Digitizer takes approximately 12 minutes and with Matterform from 3 minutes(!) up. Whether this is relevant or not is likely to depend not only on the user’s patience, but also on the end-use applications: if the scans are intended to be further used and processed in their digital forms, the speed might play a bigger role compared with the act of direct concretization, as the 3D printing process itself is not that fast – so an extra 20 minutes might not affect the whole experience that much.

The prices vary wildly, but if you’re in need of a 3D scanner right now, Makerbot’s Digitizer is basically the option in the sub $1500 market for those in a rush and shipping next month. The others from the mentioned products are in different stages of pre-production ranging from Dimbody ($530 for self-assemblers, $1,190 pre-assembled) looking for initial funding; to Matterform priced at a very appealing $599 – taking pre-orders already. The Fuel3D is also going into production after the highly successful round of crowdfunding, where the prices for the handheld scanner pledges started from $990.

So all in all, where does the Dimbody stand? In the current market and for those interested in 3D scanning solutions with a rotating platform instead of a handheld version, it’s definitely up there at the top. Accuracy is a priority and compares well with the competition, so the potential is definitely there. Another appealing factor it might have for some is the fact that all of the SW, HW and components will be released as open-source, so makers and tinkerers are likely to see it as the 3D scanner with most potential for further development and modding as well. Now it’s basically up to the crowd to decide if they will succeed with this campaign or not. I think they probably should, but you decide for yourself.

For those who might have missed our weekend’s first look at Dimbody, here’s the pitch video to give you a visual brief: