We have said it before, 3D printing and space are a “match made in heaven;” 3D printing is also good at getting people’s imaginations to “go where no one has gone before.” There are so many potential applications of 3D printing in space and we are only just beginning to take the lid off them.

In fact, astronauts themselves are now beginning to discover them and that is really going to make a difference. You may remember that some weeks ago we interviewed Jane Poynter, CEO of Paragon Space Development Corporation and one of the thinkers behind the Inspiration Mars projects, on 3D printing’s potential in her work. Ms Poynter said the most immediate advantage is spare parts: instead of hundred of different tools, a long term mission could include a 3D printer, printing material and digital models. 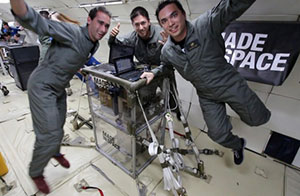 Now Reid Weiseman, the NASA astronaut bound for the ISS in May, where he will be the first person to test Made in Space’s 3D printer working in microgravity, has come to the same conclusion and is extremely excited about it.

“Imagine if Apollo 13 had a 3D printer,” Wiseman said in a news conference, as reported by Space.com. “Imagine if you’re going to Mars and instead of packing along 20,000 spare parts, you pack along a few kilograms of ink. Now, you don’t even need to know what part is going to break, you can just print out that part. Let’s say your screwdriver strips out halfway to Mars and you need a screwdriver: just print out a screwdriver. For the future, that’s quite fascinating. I really like the idea and it’ll be fun to play with it on orbit.”

The 3D printer developed by Made in Space is expected to be delivered to the ISS for the “3D Printing in Zero-G Experiment” by SpaceX’s robotic refurbishing mission in Fall 2014. The machine, which is capable of printing about 30% of the tools needed aboard the ISS, will be used to provide scientific foundations for future additive manufacturing away form Earth and demonstrate the long-term effects of micro-gravity on 3D printing. It will also lay the foundation for a full Additive Manufacturing Facility (AMF) to be flown into orbit at a later date, to enable multiple space based 3D prints.

“Just knowing that this technology works in microgravity is going to change our future flying,” added Wiseman. It will be interesting to find out what he thinks about the NASA funded 3D printed pizza.