In the dawning of this new Maker era, in which advanced technology is decreasing in price and information is increasing in proliferation, ordinary individuals are gifted with tools of immense capabilities.  Low-cost 3D printers have brought manufacturing into the average citizen’s home and the vast reaches of the world wide web provide those with Internet access with the know-how to make that personal fabrication applicable to their personal needs.  Michael Balzer is the co-host of All Things 3D, a podcast covering everything from 3D printing to immersive virtual reality headsets, but when he’s not discussing the latest 3D technology, he’s using it… [dramatic music swells] to save lives.  Though he downplays the life-saving nature of his hobbies, it is true that Mike helped guide his wife’s treatment for a Menigioma tumor.

This is Mike’s wife.

More accurately, this is a scan of the outside of his wife’s head, captured with a Structure Sensor, the itSeez3D app, and a device Mike designed himself, called 4Eyes, which magnifies the surface detail that can be picked up by the Structure Sensor by about 25%.  I mention the outside of his wife’s head because the truly remarkable aspect of Mike’s story is that he was able to 3D model and 3D print the inside of her head to inform the treatment of her condition. 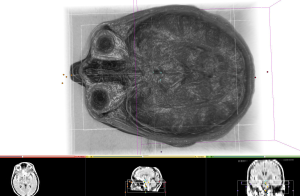 Mike told me during a podcast/interview that, over the course of the past year, some symptoms had arisen that made him believe that his wife should obtain an MRI to see if her Menigioma had progressed.  She had her thyroid removed and, subsequently, was developing intense migraines.  This, in addition to Shavaun’s own mother’s death from a brain tumor, had Mike pushing his wife to have an MRI performed.  The resulting MRI, without contrast, didn’t reveal much and the local neurologist, Mike believed, minimized the severity of the MRI results.  So, Mike took the matter of into his own hands, asking, “Is there a way out there to take that [MRI] information and visualize it?”

Using a collection of DICOM data from CT and MRI scans, Mike set about the hard work of converting these two-dimensional slices of her skull into a 3D model.  Mike explains, “I don’t know if you’ve ever looked at DICOM scans, but they’re two-dimensional and you can look at the different plane perspectives. Like a front-on view, a side-on view, and a top view… That’s about it. But to look the way we look at things is in 3D.  So I was hoping to find some tools that I could use, without spending thousands of dollars for a program.” 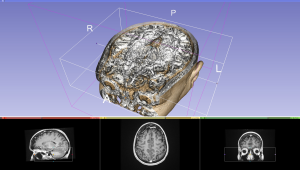 In turn, Mike worked with two open source programs to create the 3D model: 3D Slicer, from a Computer Scientist named Steve Piper in Massachusetts, and InVesalius, developed by a team at the Renato Archer Information of Technology Center in Brazil.  Finding InVesalius a bit easier to work with, Mike was able to combine all of the data and create a volume render, where Mike and his wife saw a significant bulge, but it was hazy because due to the lack of contrast used in the initial MRI.  Though their local neurologist was unwilling to perform a subsequent MRI with contrast, the Sansum Clinic in Santa Barbara, California was.  And, as Mike tells it, “Sure enough, they discovered a 3.5 cm, golf-ball-sized mass” behind his wife’s eye.

Due to the tremendous amount of pain his wife has been suffering from her migraines, she decided to go forward with an operation to have it removed.  The only problem was determining how to go about removing such a large mass from such a delicate location.  After heavy research online, Mike and his wife came across two real options for taking out her tumor.  On the one hand, the most widely performed procedure involves a craniotomy, cutting off a skull flap to access the brain, and moving a portion of the brain, which can result in the loss of sight, smell, and facial paralysis.  On the other hand, removing her thyroid the previous year, his wife had relied on an a technique using the daVinci Surgical System, which went through her arm instead of her throat to remove the gland.  This led the couple to a similarly minimally invasive operation, in which a neurosurgeon would enter through the upper eyelid and drill away at the mass to remove it bit by bit. 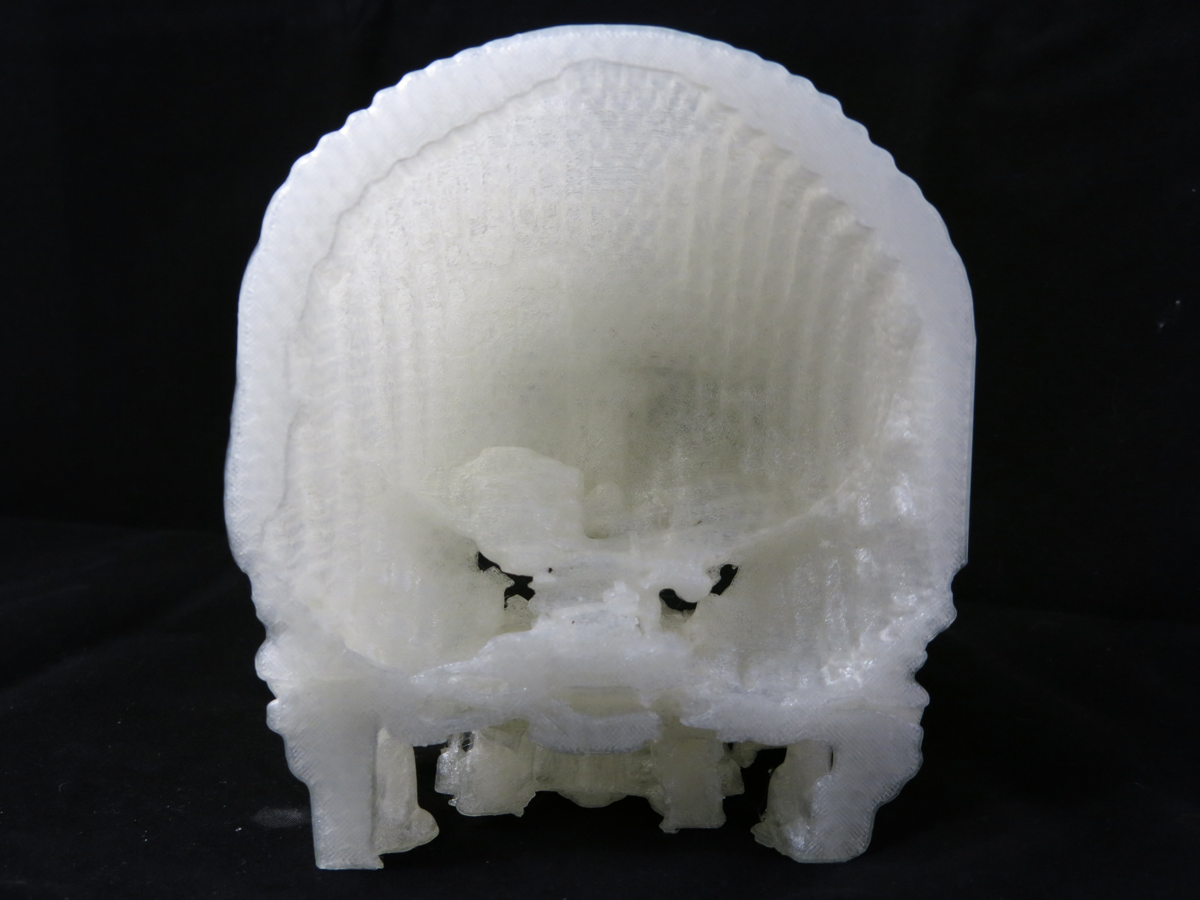 The actual process to find a surgeon to perform this, potentially, less risky procedure was not an easy one. Traveling to such varied hospitals as UCLA, the University of Pittsburgh Medical Center (UPMC), and Johns Hopkins, the couple was left with these last two as their options, with all others telling them that they could only perform a craniotomy. UPMC and Johns Hopkins, however, required further information.  Thanks to Sketchfab, Mike was able to send the 3D model of his wife’s skull to surgeons at both hospitals.  Johns Hopkins claimed that their only recourse would be a full scalping to drill through the portion of his wife’s forehead above her eyebrow. UPMC, though, agreed to do it.

Created with his Ultimaker 3D printer, Mike, then, sent UPMC a 3D printed, tangible model of his wife’s skull, which they were able to use to get a better grasp of the area on which they would perform the surgery.  On top of that, as a teaching institution, the medical school could use the 3D printed skull as an educational tool and, with Mike’s contribution, UPMC has begun considering initiating their own 3D printing program, according to the podcaster.  More importantly for Mike and his wife, the surgeons were able to use it to drill out about 95% of the tumor.  There’s a possibility that it could grow back again, but, at the same time, it may take such a long time that, when it does, medical advancements – perhaps spurred by Mike? – may make treating her condition easier and less dangerous.

Mike isn’t the first to convert medical scans to a 3D model and 3D print them for surgical purposes.  But he is, as far as I know, the first non-medical person to do so. In fact, the entire experience has taught Mike a good deal about the power that modern technology has given the so-called ordinary person.  While Michael Balzer may not have the educational background to be a neurosurgeon, the abundant information available on the web in addition to powerful 3D modeling and 3D printing tools empowered Mike and his wife to be their own advocates. 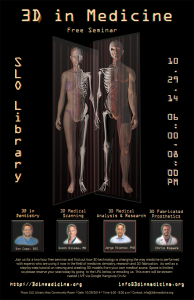 For that reason, Mike is hosting a free seminar on 3D technology in medicine, where he hopes, with the help of a few doctors and his podcast co-host, to show others how they can become their own medical advocates with 3D scanning, modeling, and printing.  If you happen to be in San Luis Obispo, I urge you to attend October 29, from 6 to 8 pm at the San Luis Obispo County Library. If not, Mike will also be broadcasting the event live over Google Hangouts, so, you’ll have something to occupy your mind while sewing your Halloween costume.

And, once you’re done watching that, you can listen to Mike Molitch-Hou interviewing Mike Balzer on the All Things 3D podcast, as soon as Mike gets around to publishing it. That is, if the space-time continuum is still in tact at that point.