Dimension Alley, Berlin’s first 3D print shop, told me that kids love 3D printing and that boys, in particular, love to 3D print rockets. The leap from rockets to robots is not such a long way. 3D Systems bet on it by acquiring the My Robot Nation web-based customized robot service; and now, Thinker Thing, a Chile-based start-up with a very cool looking website, wants to do something similar on Android based tablets and smartphones with its new Dr. Fluff’s Robot Factory App.

The App can be downloaded for free from the Google Play store and what it does is allow for easy customisation of colourful robots, that can then be ordered and 3D printed through professional services such as Shapeways and delivered to your home. The software interface is so simple that anyone can access it. 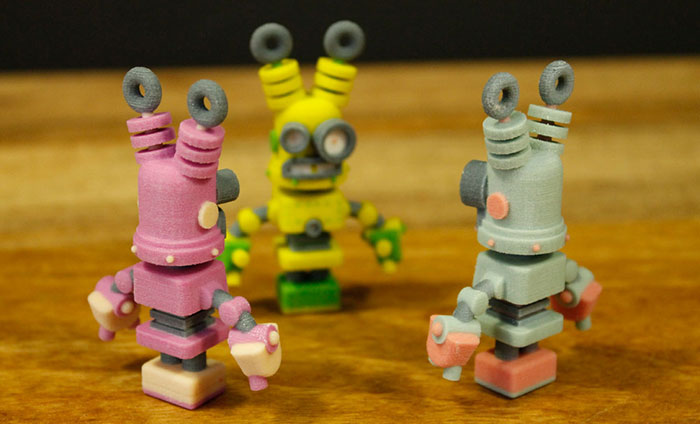 The idea is to use this simplified software to collectively make modifications and create the ideal object. In this case it is a robot toy and Thinker Thing has already said it will be focusing its software technology on playful objects but the long term plan is to apply this type of software/App based customisation and seamless 3D printing interaction to any kind of item.

Thinker Thing’s technology is based on something the software house defines as “Evolutionary Computation”, used to “grow” a 3D model from parametrically expressed preferences. The “evolutionary algorithm based engine” utilizes a crossover and mutation process that will apply an “artificial natural selection”to the object that will live on to produce the next generation, and will thus be determined by user preferences, expressed thorough collective global social data. The era of Dr. Fluff’s 3D printed robots has but begun.