In the Star Wars saga, Clone Troopers were created to defend the Republic, before becoming Stormtroopers to serve the Empire. If, in the upcoming trilogy by Disney and JJ Abrams, they are once again to fight for the good side of the Force, 7-year-old Liam Porter might be their ideal spokesperson. Born without part of his left arm, the child from Augusta, Georgia, just “joined their ranks” upon receiving a 3D printed clone trooper arm from John Peterson and the e-NABLE network. 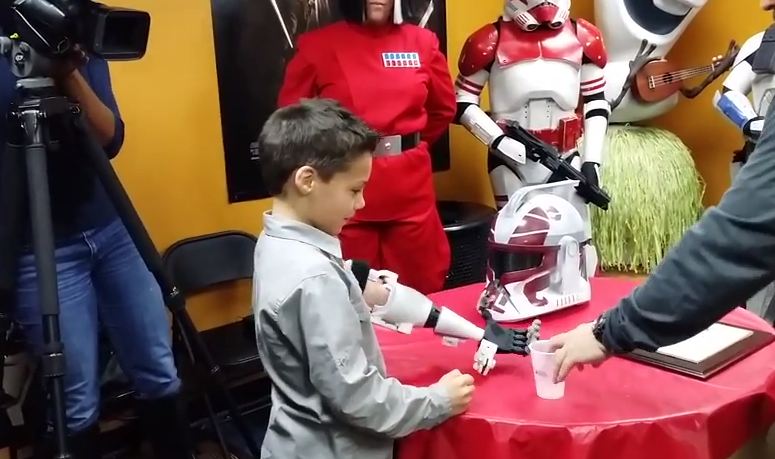 As Peterson told the Augusta Chronicle, he had been building his own 3D printer and set out to create one of the e-NABLE 3D printable prosthetic hand models. The global network, which has grown to over 3.000 members in just a few, very intense months, helps those who need 3D printed limb prosthetics connect with those who can design and 3D print them. Thus, they put Peterson, who is also from Augusta, in touch with young Liam.

The story got even better when Peterson ran into a team of Star Wars cosplayers during a Maker Faire. The arm he had been designing was, presumably, a modified version of the RIT Arm design, an adaptive device made for people with an elbow but no wrist. To add a touch of personalisation, Peterson designed it to be similar to a Clone Trooper arm, so the cosplayers from the 501st Legion asked to be present when the arm was to be delivered to Liam.

The delivery ceremony was a success, mostly thanks to Liam, who could not contain his joy and showed enormous appreciation for being able to hold something in his new mechanical hand for the first time. As Liam mother’s explained, the new arm will make things a little bit easier for him. While the e-NABLE hands are generally very basic mechanical prostheses, they beat the alternative which, for children who are still growing rapidly, usually means no prosthetic limb at all.

The open source, shared-creativity model implemented by e-NABLE is promoting a rapid development of these prosthetic limbs. As Peterson said, arm designs were not offered until a couple of months ago. Now, there is even a new myoelectric, robotic arm called the Limbitless Arm and progress is moving fast. At this rate, by the time the next Star Wars trilogy is completed, the fully functional Luke Skywalker prosthetic hand might be within reach.