A 3D Printed Gun and the Metal Marketing Mystery

Solid Concepts has manufactured the world’s first ‘3D printed’ metal gun using direct metal laser sintering of powdered metals. Since the story went live just over a week ago there has been a frenzy across the global press! And, since the origins of the first 3D printed plastic gun earlier in the year, sensationalist media headlines and stories about 3D printing and guns have never been more than a page or a click away! As it happens, despite the hyteria, to date, the only occasions on which laws have been broken with plastic 3D printed guns have been by journalists. On the metal front, here at 3DPI, we let the dust settle some and spoke to Solid Concepts directly about the ethics behind their gun.

Is it ethically correct for Solid Concepts to have tapped into this trend for marketing attention? Especially when home metal 3D printers are just around the corner? Over the past week I have been chatting to the marketing team at Solid Concepts probing their motivation for creating this gun. I’ll present the information on the technology, then move on to the ethics and the unique insight into the reaction to the gun by 3D printing insiders and my own ethical debate with the marketing team at Solid Concepts.

First, the gun: it is fully functional and has fired approximately 500 rounds in an endurance test at the end of last week. It is composed of 33 17-4 Stainless Steel and Inconel components and decked with a laser sintered carbon-fibre-filled nylon hand-grip.

Every part of the gun except for the springs is made by utilizing the direct metal laser sintering process — an additive metal fabrication technology developed by EOS of Munich, Germany — which makes metal parts from a three-dimensional design by blasting powdered metal with a high power laser. 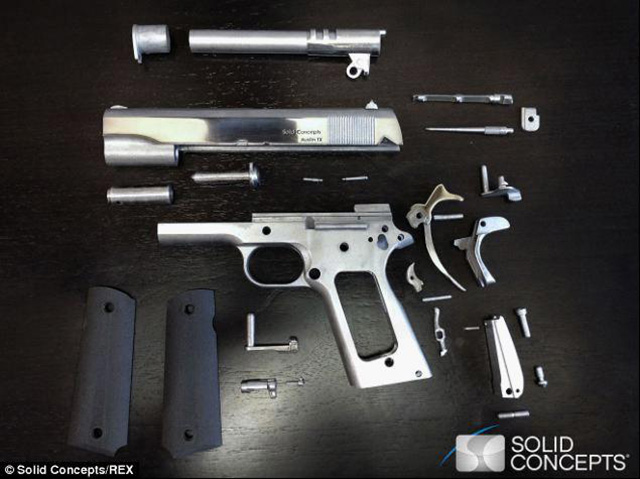 Solid Concepts initially stated that its motivation here was that it wished to prove that 3D printing is a viable solution that can be used in modern manufacturing and is here to stay. As the 3D printed gun barrel sees chamber pressures above 20,000 psi upon firing, the stress and duress upon the creation is indeed viable proof of that which Solid Concepts suggests: that, at least in part, they developed the weapon to prove the reliability, accuracy and usability of metal 3D printing.

The company aims to apply this novelty to customers seeking custom 3D printed weapons: ‘…as far as we know, we’re the only 3D Printing Service Provider with a Federal Firearms License (FFL),’ Mr Firestone said ‘Now if a qualifying customer needs a unique gun part in five days, we can deliver.’

However, I was immediately cynical regarding the motives behind their choice of the 1911 gun model, which, as they state, is a design in the public domain, in theory meaning people with access to metal 3D printing technology at home could do the same. Did Solid Concepts consider this as part of their marketing strategy? 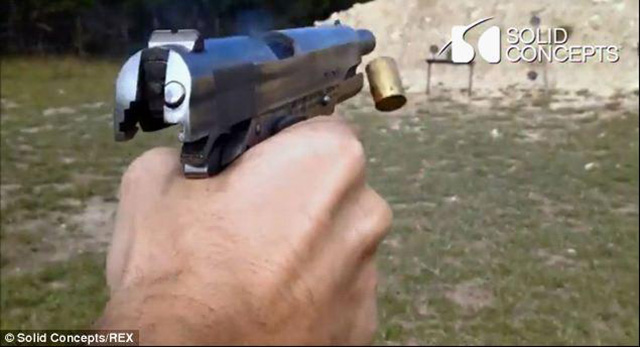 Many will be quick to point out that there are no commercial home metal 3D printers in existence, and that the technology required to produce the gun costs around a cool half a million pounds. Surely, then, my concern that this development may lead to that which I posited to Solid Concepts, that a home 3D printed gun, a consequential crack down on home 3D printers, and a corresponding loss to the economy by 2020 in the order of billions, is surely me grossly over-reacting?

But I am not sure I am, although I am open to the possibility. As I mentioned to Solid Concepts, there are already home 3D printers in devolvement, as seen in one of our most consistently popular articles regarding The Vader.

Much speculation has circulated the tech media since @Mims of Quartz, (someone I have spoken to every few weeks for months now) organised a get together of 3D printing insiders which revealed that a patent for Laser Sintering, a prime technology for metal 3D printing, expired in 2014.

The speculation — which I agree with in part — orientates around the potential for an organic explosion of home metal 3D printing akin to that which the expiration of Stratasys’ Fused Deposition Modeling (FDM) patent caused in home plastic 3D printing, which was then made opensource by 3D printing legend Adrian Bowyer of RepRap Pro, former professor at Bath university, and generally monikered as the catchy Fused Filament Fabrication (FFF) process.

The Solid Concepts marketeer I conversed with defaulted to the experience with the technology that they have, and inferred that I was not comprehending the engineering aspects involved — I do, actually. The crux here is around whether home metal 3D printers will be able to produce a sufficiently strong barrel for a gun. The forces involved are huge.

The argument around whether people should or shouldn’t be able to freely make their own firearms (it has been widely documented that it is easier, cheaper and generally safer to do it by methods other than 3D printing) aside, it is the engineering and therefore the safety-of-use aspects that I am considering here. And the fact that there are already a range of approaches to home metal 3D printing in action, albeit early days, is something that Solid Concepts has, from my conversations with their marketing department, seemingly overlooked. 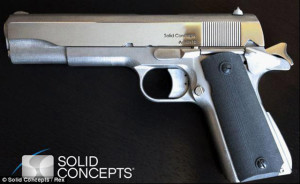 t is more likely than not that it is only a short matter of time before the capacity to 3D print a gun at home in metal is available.

The mass hysteria surrounding a one shot plastic 3D printed gun that has yet to be fired in aggression has mainly made news headlines when journalists themselves pull sensationalist stunts, such as smuggling the gun across border controls by the UK’s Daily Mail, and into the same room as the Prime Minister by journalists in Israel. In this respect, a metal 3D printed gun is less of a threat in that it is as detectable as any “regular” gun.

And yet, the first company that went out of its way to produce a ‘3D printed metal gun’ was inevitably going to make headlines all over the world thereby netting considerable “free publicity”. ‘If it’s possible to make a 3D printed metal gun the global media will cover it as a matter of course just because the story includes the terms ‘3D printing’ and ‘gun’.

Solid Concepts was likely counting on it.

Solid Concepts has made no direct defence of its creation to myself or any other of the many critics of their metal gun that occurred on LinkedIn. I trust the marketing contact who told me that when she deleted the question posed to the largest 3D printing group on LinkedIn further to negative replies that it was, indeed, “an accident”.

I have screengrabs of that deleted conversation, which I had already taken as part of my research into this article. I have conceded to the request of Solid Concepts that I will not post them. After all, this is not about sensationalism to counter sensationalism.

Here’s the bottom line, for me: Guns kill. Guns are illegal in most of the world’s nation states. Solid Concepts is based in Texas. Texas is well known for its gun culture. Here, in the UK, barely anyone has a gun, wants a gun, or wishes that guns were a part of our culture.

That part is simple, logical and ethical.

Also: guns do not guarantee freedom over tyranny now that States have the arsenal to destroy a city in seconds.

300 million Americans armed with rifles and hand guns stand no chance against any potential tyranny where the State has 2000 F-35 fighters, 10 aircraft carriers so large they require two nuclear engines to move, a fleet of UAV drones, the ability to close down the internet and weapons in development that include everything from electro-magnetic pulse systems that can take out a city’s power supply to an army of robots.

Cody Wilson of Defense Distributed achieved fame (thanks to sensationalist mass media) by creating a blueprint of a gun that can be 3D printed at home and posting it on the internet, whereby, because of the mass medias attention, those who support his cause posted it on many file site repositories across the internet. Meaning that by the time US law enforcement forced him to take the designs down, he had achieved his aim: a digital weapon in cyberspace that can never be completely censored.

Anarchism is generally about the rule of conscience over externally imposed rules. Anarchism was given a bad name by some violent Anarchists around a century ago, who made violent protests against the rise of fascism. Since then, States ensure that their media outlets continue the affiliation between Anarchism and violence, as Statism and Anarchism are opposites.

Here, I am merely remaining objective and openminded: I do not espouse Anarchism, Communism (ie. Single Part socialism, which is very different from socials itself), autocracy or any kind of violence. Nor indeed to I espouse liaison-faire Capitalism.

What I do espouse is the potential of home 3D printing to bring the ownership of means of production out of the sole possession of the State AND the Capitalist into the ownership of the individual.

This does not need to replace those former socio-political systems, but does create the opportunity for an increase in democracy, cheaper production for the world’s poor (in time), a greater expendable income for the middle class (on which purchasing power is contingent, upon which corporations profit margins and thus economic growth reside), and new systems of crowdsourcing ideas for mass produced concepts for corporations themselves.

All of this however, is contingent upon the free ownership of 3D printers in the home.

However, Defense Distributed (in the name of Social Libertarianism), and Solid Concepts, (primarily in the name of profit), are unwittingly playing their part to diminish the potential positives for future economic growth, the safety of citizens and a fairer society for the poor.

What if I’m just plain wrong? Well, like I said, I am open to that, I would be foolish not to be. However ….

In my other article for 3DPI today, I review another new home metal 3D printer…