At about the same time that 3D printing began to rise in popularity, Bitcoin started making its way into the zeitgeist. The digital currency, almost free from government control, has been heralded as bringing about a revolution in the monetary system in much the same way that 3D printing is meant to cause a paradigm shift in manufacturing. It would only seem reasonable, then, that the two would eventually meet. Hugh Halford-Thompson, the CEO of 3Distributed and QuickBitCoin has been developing businesses around the two technologies side-by-side. 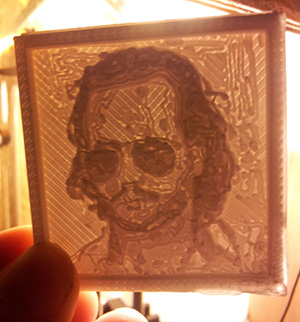 First operating his bitcoin buying service, QuickBitCoin — in which customers in the UK can purchase bitcoins with a quick conversion from British pounds to the digital currency — it was only natural to incorporate his beloved bits into the 3D printing retail shop, 3Distributed, he created later on. Aside from selling parts for RepRap 3D printers, 3Distributed, as we’ve covered before, also has a 3D-printed lithophane service that converts 2D images to semi-translucent 3D-printed images. More interesting than the lithophanes, however, 3Distributed is one of the few 3D printing shops I’ve come across to accept bitcoin as a form of payment.

The entrepreneur seems to want the two technologies to be mutually beneficial, offering a 2% discount for 3Distributed customers who pay with bitcoins. While very few customers have used Bitcoin to purchase their motors, extruders and filaments to date, he has seen an increase in traffic due to the announcement that the retailer allowed the digital currency’s use. CoinDesk reports in an interview with Halford-Thompson that “3Distributed observed a tenfold increase in web traffic on the day of its announcement and has enjoyed a 30% sustained increase in traffic since.” The two communities have yet to experience significant overlap, though, with Harlford-Thompson telling CoinDesk that, “The bitcoin community may not be interested in building 3D printers, but more to the point, most [of] my 3D printing customers are not familiar with Bitcoin and so simply don’t choose to use it.”

I’m still wrapping my head around Bitcoin and trying to learn what its capable of. In the past, I’ve associated it with the likes of Cody Wilson, Silk Road and others who mistake public safety for over-regulation by “big government”, but I have a gut feeling that the digital currency could have a democratizing potential. As Halford-Thompson explains to CoinDesk: “Corruption in governments worldwide is rife and as long as governments control the money supply, they have ultimate power over their people. I don’t want to get into the debate over whether this is good or bad, but Bitcoin can flip this on its head and as such it should have a bigger impact on the world as we know it.”

What I do know about Bitcoin is that, for those who praise it as a currency free from the hands of governments, there have been moves to begin regulating it. I invite a healthy debate in the comments section about whether this is a good thing or not.