The (relatively) new technology of 3D printing gives designers the ability to design elaborate objects, but the technology of light has been transforming our world since the beginning of time.  In fact, some might consider light to be time itself.  We’ve previously covered a 3D printed light fixture that, once illuminated, changes an entire room into an eerie forest.  Belgium-based designer Corneel Cannaerts’s Dazzle Lamps do a different sort of dance when the switch is flicked.

Printed on a ProJet, née Z-Corp, printer, Cannaerts is able to construct light fixtures with a dark exterior and light interior, playing with the complementary relationship between light and dark.  On the outside and when turned off, his lamps are an oblique grey.  On the inside, and when turned on, however, his lamps reveal a stunning array of colors. Inside of the small triangular opening of each fixture is a small LED and the lamps can be matched with two custom fittings, so that they may be used as a pendant or standing lamp. Cannaerts explains how 3D printing might change the way we design, saying, “The dazzle lamp prototypes look at the potential of 3D colour printing to embed different states within an object.”

The software for designing the lamps was coded by Cannaerts himself, using the open source processing software and a few accompanying libraries: he_mesh, toxiclibs,controp5, and peasycam. With his program, it’s possible to use any image as the interior colored mesh, as Cannaerts demonstrates with the My Little Pony image below.  For now, his application is only available for desktops, but he’s in the process of developing web and mobile apps so that anyone will be able to create their own lamp designs, customizing their own shapes and colors. 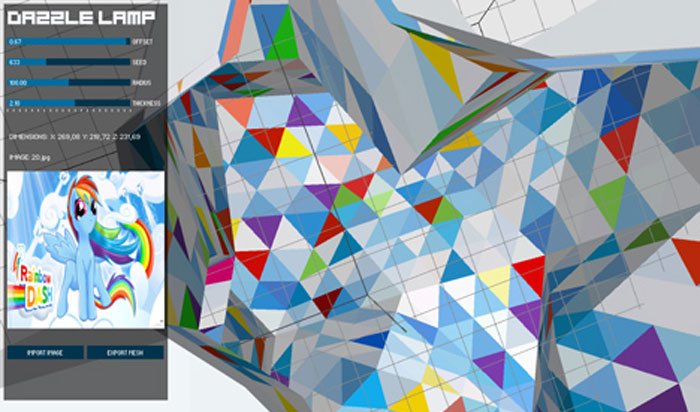 Though the Dazzling Lamp is called a prototype, it seems that they are available for purchase by contacting the artist directly at [email protected]. Whether or not his other 3D-printed lamp and his strange sculpture, titled “Sphere Inversion”, are for sale, too, I’m not sure.