That sex sells is no revelation. That writing an article about my adoration of a 3D printer entitled ‘The World’s Sexiest 3D Printer‘ should go on to become the most-read article here at the world’s most-read 3D printing publication was quite insightful however. That being said, whether it’s more insightful about this writer or our beloved 3D Printing Industry readership is a different question…  Is returning to review the sexy 3D printer’s crowd-funding campaign akin to being asked to whisper sweet nothings in the ears of an expectant 3DPI audience?

You aren’t reading this for a new installment of your favourite ongoing 3D printing erotica. Um. Are you? Being interested in technology, innovation and the strangely disruptive world of additive making machines you’re far beyond such imperatives. You are a connoisseur of devices and appliances with a mind for a new idea and an eye for innovation and your refined techno-etiquette that dotes not upon the animalistic nature of carnal vices. But let us put aside composure and discover just why many 3D printing news readers are so darn kinky…

Let’s face it, there are 3D printers that look as if they are a Frankenstein of circuits. We try not to judge them on their appearance, after all, appearances can be deceptive. Not succumbing to the superficial was a consideration that originally spurred my purchase of the Solidoodle 2 a year ago now: it may look like an unassuming box on the outside, but that’s where they have cut costs, rather than the electronic and mechanical elements. To this day that self-same printer stares at me from my desk with a solid homogeneous ubiquity of grey, like a garrison of steel girdles braced for a darn dank dark Soviet Siberian winter. 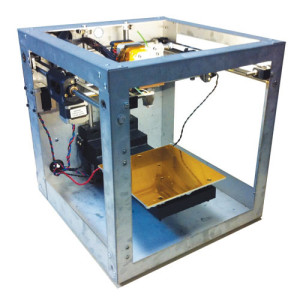 Now, fear not, my Solidoodle and I have reached an understanding. We both know that it’s just not going to work out in the long term, but it’s okay, we understand each other and know that it is for the best…

Don’t get me wrong, all manner of household items have benefited from the reassurance that should I do something just-a-little-too-silly with them so that the garbage may not be their inevitable fate – from vacuum cleaners to light bulb fittings (careful on that one please if the idea just lit up like, well, a bulb…) but there’s something about the Solidoodle 2 that does not speak of longevity. So what will I be upgrading to? Here for your deliberation is a run-down of printers pursuing household device classification.

Some are slick, some are sexy, some are just plain pleasant house-ware, but whatever their reasons for being listed in the Ms. World 3D Printer 2013 line-up, all the contenders will be asked to reveal that special something hidden away for birthday’s and wedding anniversaries and share their unique features with you, their potential admirers. Perhaps also their wishes for world peace. 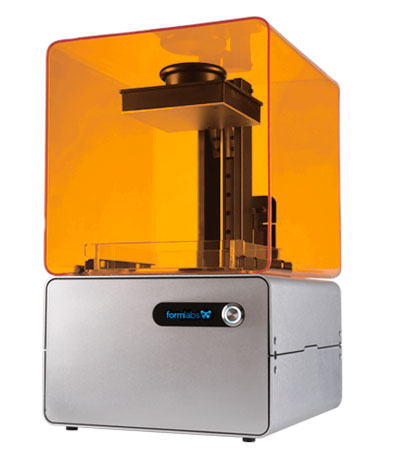 If 3D printers were people the Form 1 by FormLabs would be a shape-shifter of your choice. Be it the T-1000 from Terminator, Odo from Star trek or whatever other shape-shifting celebrity character we so choose it does not matter, the important part is that they can change to fit in both the lists for the 100 Sexiest Women list AND the 100 Sexiest Men. Why? Because the Form 1 has so much sexy going on the award for one gender just isn’t going to do it justice!

I have no idea whether the external dimensions are measured out to example the golden ratio or it’s just that 3D printers were predestined to appear at their most beautiful with this aesthetic, but whatever it is about those well proportioned measurements they are genuine candy for the eye. At 4.9 x 4.9 x 6.5 inches tall the print output is only average, but the overall dimensions of the machine are plotted for your pure perceptional pleasure.
There is no element of the external appearance of the printer that has not been considered. Some elements are founded in practicality but all elements appear as if they were founded in aesthetic consideration, something few 3D printers indeed can lay claim to. Whilst a snag on a t-shirt may be a pragmatic reason to round off the edges of the design, the smooth curved corners suggest that here is a device for your home, not just your home office.

You own it, you are proud of it, you want to feel its permanence as a new feature. That permanence means that ‘some black box’ is just not enough. We don’t want to upholster it, but we do like that it looks distinguished, distinguishable, whilst being refined enough to not to have to try to shout about it in a million colours. A paragraph that could sum up most of the most successful technology designed for the home in the past decade sums up the Form 1: 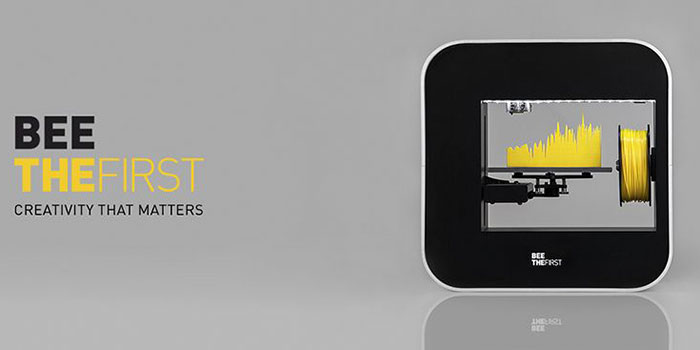 It’s not all about the curves, barely at all in fact: for myself, I have always been attracted more to what is on the inside than the outside. But the Beethefirst scores on both fronts — those outer attractions and the real character of the inside both readily available for display. External curvaceous lines boast epidermal beauty that will be the raison d’être to some, whilst also allowing one to dote upon the assiduous content. Here the deeds of Beethefirst, with its frisky build area exposed to the outside world in voyeuristic confidence, are for all to see.

3D printers fascinate. Watching that thing appear as if out of nowhere. High technology is magical. Literally. In the digital age visuals are conjured from invisible streams to live screens instantly and invisibly. Don’t get me wrong, to some watching a 3D printer create is little more exciting that watching paint dry, but as much as a household pet can become a focal point for conversation so can a device hooked up to your P.C. that is somehow making a chess set out of… hang on, just how is that thing working?

Why should a household object that is a talking piece have to look ugly?

Ultimately people will purchase 3D printers for their utility, but where saleable objects can have diversity, they will have diversity, and where they have diversity it is an age-old truth that ubiquity of utility is trumped by the-same-thing-but-is-better-looking. But, until extractor fans are regularly placed in living rooms or you have considered whether it is appropriate for you to have the window ajar for a number of hours in there, it’s doubtful whether a mahogany facade will be a particularly pressing potential purchase consideration.

The Beethefirst is one for the living room of the future, and the home office of the present. 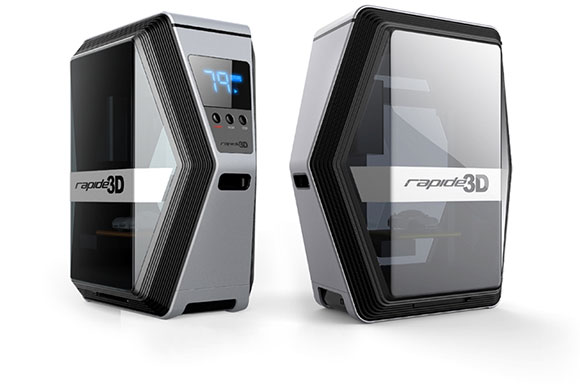 A bit of a tease, but my reasons can be read at The World’s Sexiest 3D Printer. 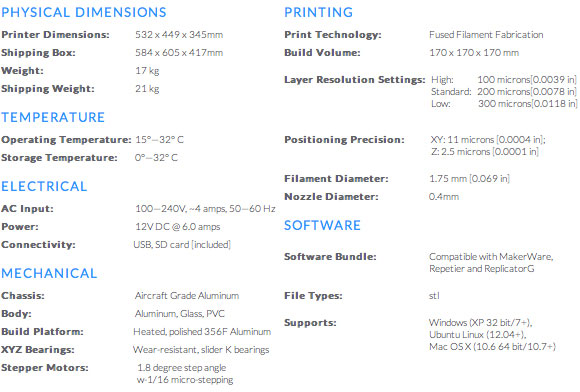 Best of the Rest:

I could write about how the mainstay – Ultimaker 2 / Solidoodle 4 / Cube X / MakerBot 2 – of 3D printers are luscious creatures in their own right, how some ‘just missed out’ or ‘why you didn’t see the… as part of the prize winners’ in the internationally renown (probably) Ms. World 3D Printer 2013 competition, but then, well, that would be taking all this a bit too seriously.

In terms of practical worth however, better examples of the kind of 3D printer that home users should be looking at for real utility now include those with multiple output material options (Hyrel 3D), home 3D printed metal via the Mini Metal Maker, home 3D printing electronics circuits, multiple print heads and tools (Zmorph). If you hae yet to look at these recent developments, this author strongly recommends looking into them before a 3D printer purchase. 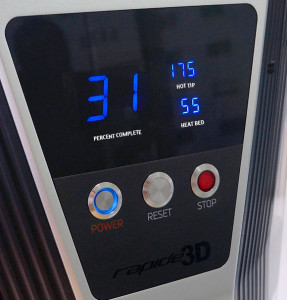 How does Rapide One work?

Rapide One is a 3D Printer which uses FFF technology to produce 3D print designs from any .stl file and can print using either a Mac or PC. There’s also an SD Slot included to allow printing straight from an SD Card.

The entire Rapide One is 532 x 449 x 345mm when closed. When the cover is opened, you need about 300mm clearance at the top. Rapide One can create layers as thin as 100 microns. The minimum feature size, limited by the diameter of the print head, is 300 microns.

The Rapide One with single extruder starts from USD$2499.

Rapide One is a dedicated team of Australian and Chinese designers and engineers who believe in bringing the best technology to the world sooner rather than later. We have offices in Perth, Melbourne, Hong Kong, Shenzhen and Guangzhou and design and development facilities in Shenzhen, China.