On Friday, Swinburne Institute for Social Research presented the first symposium of its kind in Australia – ‘3D Printing: Social and Cultural Trajectories’. A wide variety of researchers from humanities to social sciences came together for a captivating conversation on all things 3D printing. This event is the first of its kind in Australia (possibly worldwide) that had a specific focus on the social, cultural and legal aspects of 3D printing. While technical discussions are the norm, it is quite clear these complementary forces present a significant barrier in the diffusion of 3D printing technology. 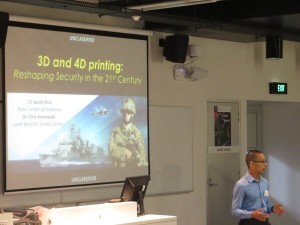 The first session – Applications of 3D Printing – was an insight into the tangible side of 3D printing as it moves into various industries. The presentations expressed how the impacts of 3D printing can be applied to the least suspected areas. The conference started with a ‘bang’ thanks to Lt Jacob Choi from the Australian Army’s Land Warfare Studies Centre. His presentation focused on how the Australian army is approaching 3D and 4D printing (shapes that change over time): both their uses by the army, and the risks and threats they pose.

Dr Jaye McKenzie-Clark from the Department of Ancient History at Macquarie University presented a different take on applications of 3D printing. In partnership with Professor John Magnussen of the Australian School of Advanced Medicine, Dr McKenzie-Clark has used 3D printing and other technologies such as modern medical imaging to transform the field of the non-destructive analysis of ancient pottery. They have been printing out scanned copies of ancient artefacts. Examples include sealed Cuneiform tablets from 3000 BC, and very fragile Gallic Sigillata bowls whose originals are valued at $10,000s. Now, these objects from the Macquarie University Museum of Ancient History are much more ‘touchable’ by students and visitors, and Dr McKenzie-Clark kindly brought along the 3D printed objects to the symposium to be touched by the audience after her talk.

The second session – Site Studies of 3DP – took us from New York to Shanghai, exploring the impacts on these two global cities. Professor Donald McNeill from the University of Western Sydney talked us through the rise of 3D printing. Professor McNeill focused on the famous Brooklyn giant Makerbot and Dutch company Shapeways, which now also has a base in the Big Apple. This hi-tech industry is having significant effects on restructuring the borough’s urban economy.

Dr Xin Gu from the University of Melbourne took us across the globe to Shanghai, China. Dr Gu has spent much of her time tinkering in the hackerspace culture of China. Her study, of the “New Work Unit” (Xin Che Jian) 3D printing hackerspace in Shanghai, was an interesting insight into the hacker roots of emerging technologies, including 3D printing.

After lunch, the third session focused on the Social Theory and Cultural Studies of 3D Printing. Dr Tama Leaver from Curtin University started with his presentation on the Physibles section of the Pirate Bay. This was linked to previous experiences with the music industry (the disruption by Napster), and the media responses to the launch of Physibles. Following this, Dr Leaver presented the creation of the Liberator 3D printable gun, its place in US gun culture, and debates over firearms. Finally, Dr Leaver analysed what he termed ‘the heroic saviour narrative’ around 3D printing, contained for instance in Chris Anderson’s ‘Makers’ book, President Obama’s 2013 State of the Union address and even 3D printing’s appearance in a recent episode of Grey’s Anatomy.

More theoretical approaches to 3D printing were taken in the presentations of Robbie Fordyce and Luke Heemsbergen – both of whom are PhD candidates in the School for Culture and Communication at the University of Melbourne. Robbie’s presentation examined themes such as what Italian autonomist social theory has to say about 3D printing and how different political ideologies from Neo-Nazis, anti-feminists and crypto-libertarians have been imagining 3D printing. Luke then identified several tendencies emerging around humanities and social sciences approaches to 3D printing research, such as the rapid production of goods in the domestic sphere, digital labour replacing manual labour and significant new potentials for household aesthetic and cultural practices.

The symposium closed with a tour-de-force keynote speech from Dr Matthew Rimmer, ARC Future Fellow and Associate Professor in Law at the Australian National University, on ‘Intellectual Property, 3D Printing, Remix Culture and the Maker Movement’. Dr Rimmer considered intellectual property: particularly the areas of law that lack the ability to be transferred into the 3D arena. Finally, Professor Julian Thomas, Director of the Swinburne Institute for Social Research was Dr Rimmer’s discussant, and urged that 3D printing be looked at in the context of the history of plastics as well as the history of computers.

So we ended a very full day, tired but much better informed about how 3D printing was being used and studied in a variety of fields!

The symposium was organised by the Social Aspects of 3D Printing project at the Swinburne Institute for Social Research, Swinburne University of Technology, Melbourne, Australia.

Angela Daly is a research fellow at the Swinburne Institute for Social Research and a PhD candidate at the European University Institute. Her work focuses on the interaction between law and technology, and her current project at Swinburne looks at the legal and social implications of 3D printing. Twitter: @angelacdaly Darcy Allen is a PhD Candidate (Economics, Finance and Marketing) at RMIT University, and a Research Assistant at the Swinburne Institute for Social Research. His work focuses on innovation and institutional economics, with more niche focuses on 3D Printing, Hackerspaces and the Innovation Commons. Twitter: @DarcyAllenEco