I admire any company whose name is an acronym for saving the world. And Italy’s WASP (World’s Advanced Saving Project) is certainly a company to admire.  When they’re not developing large-scale delta 3D printers for printing homes in third world countries, they’re 3D printing low-cost medical devices.  Today, the company announced a partnership with the Rizzoli Orthopedic Institute’s Banca delle Cellule e del Tessuto Muscoloscheletrico (Bank of Cells and Muscular-Skeletal Tissue) to 3D print both casts and, even more impressively, cranial implants. 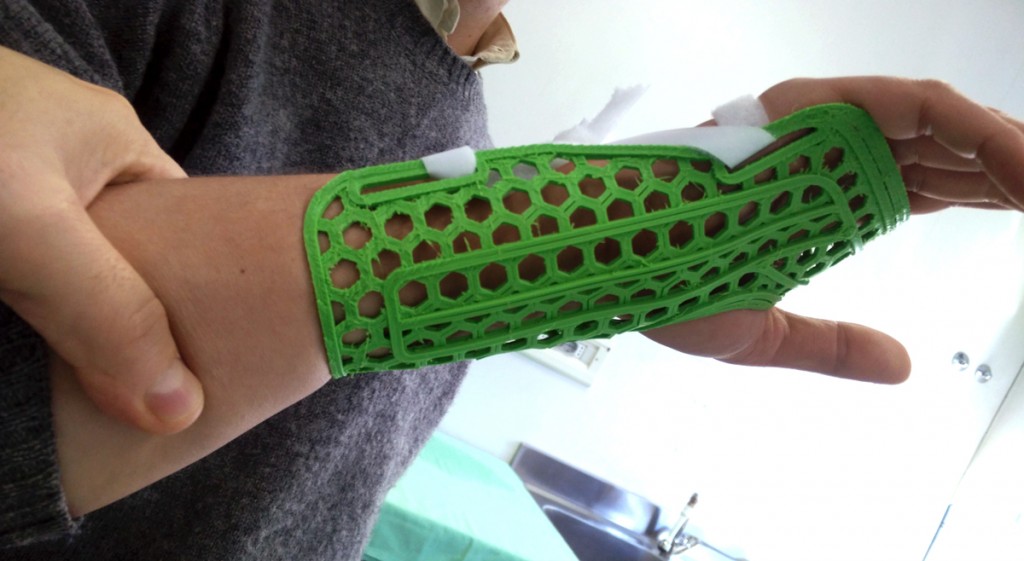 Leveraging the design and cost benefits of 3D printing, WASP and Rizzoli will be 3D printing custom “tutors”, similar or splints, to treat contusions, sprains, and fractures.  Implemented in Rizzoli’s First Aid Center, the project is already in its experimental phase, 3D printing wrist splints from PLA using prototypes originally studied by Polytechnic University of Milan’s PiuLab. In order to match the tutors to a patient’s wrist, they are printed flat and, because PLA is malleable at 60°C, heated and shaped to fit properly, before being cooled down to freeze the tutor’s form. 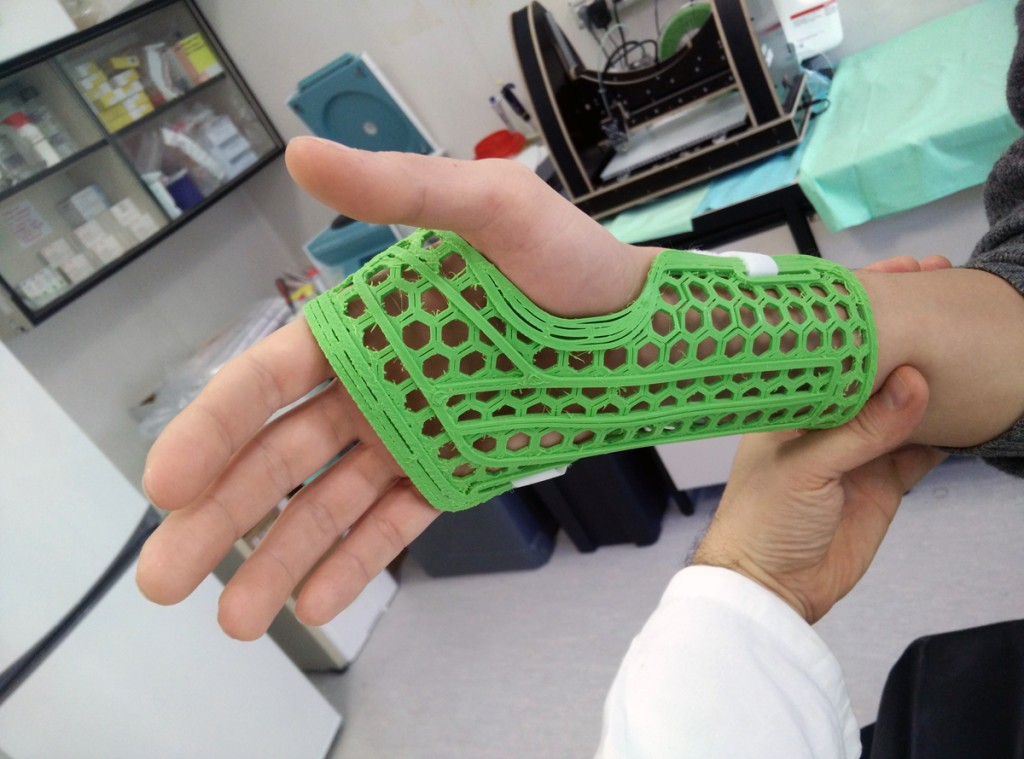 Not only are they able to reduce the cost of the devices down to €2 from the standard €30, but the tutors are perforated, increasing breath-ability.  Moreover, WASP suggests the possibility of 3D printing the devices in two materials, PLA and conductive filament, in order to accelerate the healing process via electro-stimulation.  WASP founder Massimo Moretti says, “We’re developing 3D printers with bigger sizes and bigger nozzles. It will be possible – thanks to the addition of several dimensional parameters or the patient’s hand scan, to print tailored tutors in a very short time: 10-20 minutes. In that way there will be the chance to operate live on the place, depending on the situations.” After they’ve completed their pilot with wrist tutors, the partners plan on moving onto elbow and knee tutors, as well.

Though cranial replacements are being increasingly printed, this may be the first desktop 3D printer manufacturer to participate in such a project.  Together, WASP and Rizzoli plan on replicating missing portions of cranial bone from patients’ CT scans.  The idea is to replace missing pieces of the skull using a three-layered structure: the outermost and innermost layers are stiff as the original cortical bone would be, while a middle layer is made from a spongy tissue, meant to facilitate bone regeneration.

Pier Maria Fornasari, director of the Banca delle Cellule e del Tessuto Muscoloscheletrico, told Tecnica ospedaliera, “In case of a serious cranial trauma, the surgeon is often compelled to remove the skull cap to allow the brain to expand its volume. Once the brain returns to its normal size, the skull cap has to be refurbished. Until today, there were three options: re-use the original cranial bone which can be washed and disinfected; otherwise, use a hydroxypatite cranial implant, a fragile material that forces the patient to be very careful for the rest of his life; or, another options is to implant a plastic cranial implant that cannot be absorbed. What these techniques lack is that they are made by a single layer, our cranial box is made by three layers instead.”

Currently, the teams are still researching material and printing options.  For the rigid layers, they are looking for a stiff, bio-compatible material and for the inner, spongy portion, they’ve already decided on hydroxyapatite, already used in medicine for dental and bone implants. The teams have already reached out to several neurosurgery teams to begin pre-clinical experimentation. The plan is to eventually see these cranial implants fabricated directly in the surgical arena, with these custom implants made for a significantly lower price than those currently developed.  Not only that, but WASP believes that the technology could even be used in the field of war.  The company hopes to have its first prototypes available in the next few months, with first implants being performed as early as 2016.

Both projects, financed in part by the Emilia-Romagna Region, will significantly add to WASP’s mission to save the world, demonstrating that the company is serious about its goals, not only in printing homes for the underprivileged, but reducing costs and improving access to medical devices.  Personally, I can’t wait to see what global issue the Italian company decides to tackle next.