The Ambiguous Cylinder Illusion has become a viral sensation in recent days and now 3D printing has solved the riddle that has bewitched the Reddit community and the world at large.

The illusion was concocted by Japanese engineer and artist Kokichi Sugihara, who released a video of plastic rectangles that turn into circles when they are reflected in a mirror. The fact that the illusion worked in reverse was even more mind-boggling stuff and it’s no surprise that it made the finals of the 2016 Best Illusion of the Year competition. It took second place in the final reckoning.

“The direct views of the objects and their mirror images generate quite different interpretations of the 3D shapes,” Sugihara said. “They look like vertical cylinders, but their sections appear to be rectangles. In the other view they appear to be circles.”

It racked up more than 2.4 million views on Youtube after it was posted on Reddit, which has the power to send almost anything viral. It left the whole internet scratching their heads, because these are seemingly solid shapes that transform instantaneously in a reflective surface.

So what is the magic at work here? Devon from 3D printing specialists Make Anything reverse-engineered the whole trick with the help of a 3D printer and a heathy dose of curiosity. He discovered that the objects aren’t circles and they’re not squares either.

Each part of the illusion lies somewhere between the two shapes, with two curved sides and two squarer sides. The square sides have an upward curve while the rounded sides have a downward slope. The sides have differing heights too. This is not immediately apparent and the white surface helps conceal the differences. SO this illusion plays with our sense of perspective to create a mind-bending effect. 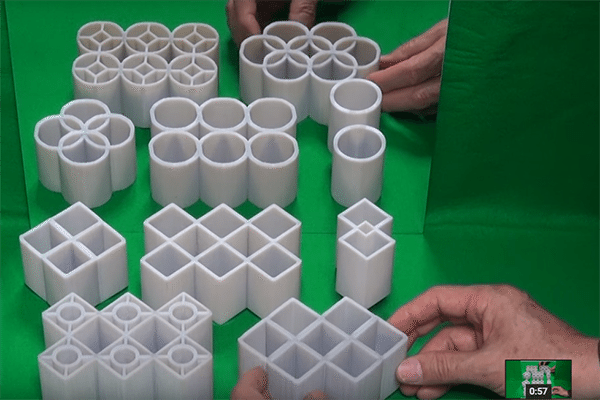 Solid shapes that bend in the mind

Our brains, when they interpret the shapes, essentially see what we expect to see. We mentally fill in the gaps. We give the illusion it’s power, therefore, which was the point of the whole exercise.

Sugihara wanted to challenge our conception and increase our level of understanding of how the brain processes information. “How we see the outside world, our perception, is generated indirectly by brain mechanisms. So all perception is illusory to some extent,” he explained. “The study of illusions is critical to how we understand sensory perception and also many ophthalmic and neurological diseases.”

That’s a lofty ambition for a cunning trick and we don’t expect any medical breakthroughs as a direct result, but there’s certainly some interesting science at work here. This illusion shows the limitations of our eyes and the receptive sensors in our brain. Effectively it’s playing with our mental blind spots.

“We cannot correct our interpretations, although we logically know that they come from the same objects,” Sugihara explained. “Even if the object is rotated in front of a viewer, it is difficult to understand the true shape of the object. Thus the illusion does not disappear.”

You can make this clever trick for yourself. Download the STL file for Devon’s 3D printable cylinder on Thingiverse here: Ambigious Cylinder Illusion.

It’s a unique trick that we’re sure you’ll enjoy and it shows the potential of 3D printing when it comes to reverse engineering this and more complex issues that we face every day.