‘The emerging potential for using 3D printing is illuminating some of the inefficiencies in mass production: the stockpiling of components and parts, the large amount of working capital required for such stockpiling, profligate waste of materials, and of course the expense of employing large numbers of people… It continues and accelerates a longer-term trend towards de-dematerialisation of manufacturing goods — a trend that has already kept the total tonnage of global goods constant over the past half century, even as their value has increased more than three-fold.’ – Al Gore,The Future, 2013, P31-32

3D printers are now generating commentary, critique, dialogue and diatribe. Some suggest significant changes in our methods of making. Some suggest that 3D printing is a temporary fashion — a fad. Increasingly analysts are projecting not just technological importance but economic implications. However, there are also sociological and political implications. How are these trends emerging? What are their macroscopic context? How will these trends evolve?

There are numerous models that suggest how mankind’s systems work holistically. An overall understanding of how new technologies fit into wider trends is required for a true appreciation of their relevance, their extant impact and the interpolated, interrelated pan-causality of human progress. I am going to choose the Wheel Of Mankind by leading influential think-tank The Club Of Rome, which has a level of influence upon the United Nations, from their book The First Global Revolution, which can be read online for free here.

The 3D printing trends that we will explore reside soundly within the new technology facet, which, as we can see from the illustration, is interlinked causally with all other components of human society with the exception of religious and spiritual values. I would briefly digress to suggest that there is indeed a link between even these two segments, as technology facilitates scientific understanding, and scientific understanding has been seen as a challenge to religious concepts since Neitsche’s philosophy and The Enlightment era, which began here where I write, in Edinburgh, Scotland. Indeed, the abrasion between less fluid conservative religious value systems and new technologies is evident every where from US Christian Evangelical activist opposition to abortion, through to Islamic fundamentalism which targets the moral decline caused by a shift in values from religious thought to empiricalist humanism. This tangent is highly relevant to 3D printing, particularly in bioprinting of human organs and the shift of ownership of means of production from Capitalist and State to the individual seen in home 3D printing and its consequences for Intellectual Property. As an example: ‘thou shalt not steal’ is contingent upon how a society classifies ownership — base morals are immutable, but their mode of expression within culture is transient.

Onto the macroscopic context of 3D printing within the facet of technology and the milieu of the global economy, before we emphasise technological trends, then hone our observations to 3D printing trends.

The present and future state of the global economy is contingent upon mankind’s capacity to liberate energy resources, manufacture, transport, sociological factors such as political stability, and at the base level of this interrelated casual system, the environment. Mankind’s environment is an ambient facet in itself: from the ecology of the African savanna to the hunter-gatherer tribe, from the agricultural town in a plain or steppe to the feudal citadel, from the breadth of the Earth to asteroid capture and the mining of other world’s, our species affects its environment based upon its reach, and said reach is heavily contingent upon its level of technological progression.

Technology itself is a mainly human phenomena. I believe that our species has a loose set of wide phenotypical components: gene, meme (as per evolutionary theorist Richard Dawkin’s term in his seminal book The Selfish Gene; AKA culturgen), techeme (distinct unit of technology) and pheme (unit of interface of effectual behaviour between the animate and inanimate: such as a trait of humans and an element of the geosphere, hydrosphere, biosphere, cryosphere, atmosphere or ‘exosphere’). Technology is an evolutionary byproduct of our evolutionary ideas that span from our evolved biology. There are many other species that use technology, many in far more advanced ways than we have realised until recently. What is unique on Earth about Homo Sapiens Sapiens is our capacity for innovating technology.

The rate of technological progress is increasing. This is a concept that many are now familiar with, but it seems that the acceleration of rate of change of technology is a phenomena that many find difficult to cognitively and emotionally process: an exponential trend that defies our linear perception of time. Put another way, humans are walking up a hill that is getting steeper ever more quickly. The hill is technology. The stress of modern life is primarily because of this, directly and indirectly. A factor in this is the exponential growth of computing, a central techeme in 3D printing technologies. 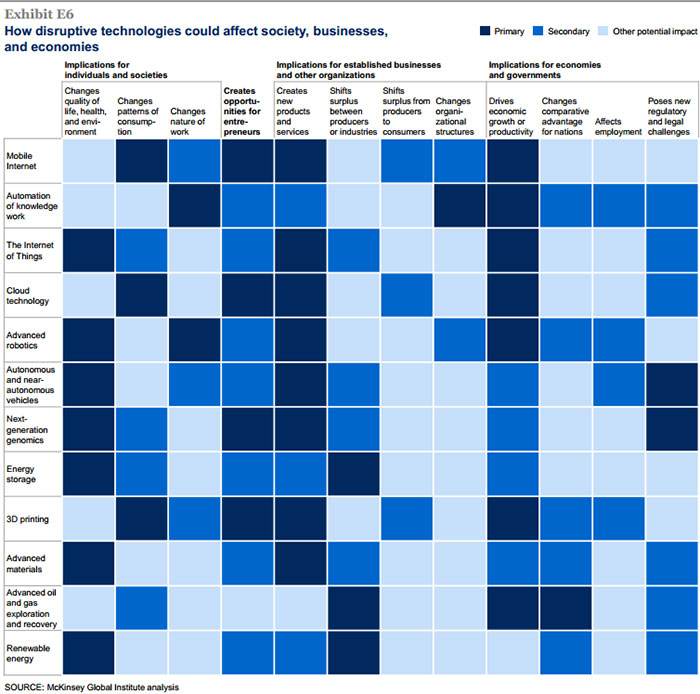 When we note that 3D printing has an estimated global market worth potentially double that of renewable energy, and greater than new gas and oil exploration and extraction, the size of the predicted impact of 3D printing becomes evident. Whilst the Internet of Things is an example of a disruptive technology some ten times the economic impact of 3D printing, this should be of little surprise, as, simply put, 3D printing is a way of making a proportion of things, whereas the Internet of Things is a network of almost all made things.

I choose this example as there will be a measure of crossover between 3D printing — both in the guise of industrial additive manufacturing and personal desktop 3D printing — and the Internet of Things. Previously I have articulated in articles that I believe we will witness a possible set of definitions of networks within the overall Web Of Everything. 3D printing offers a ‘makernet,’ a set of intertwined maker social networks; 3D file repositories; and home manufactured devices, a larger than average number of them opensource, that are printed with smart components enabling connectivity and big data potentiality that may be considered a crossover with the Internet of Things.

This latter phenomena will, if my prediction proves accurate, be based upon the Arduino and Raspeberry Pi boards already popular with makers, sensory components and internet connectivity components that offer a huge potential in personalisation. A counter thesis is the limitations of shared data and connectivity that will result from personalisation, but, in turn, this creates the oppportunity for platform owners – such as Apple, Google, Microsoft and now Samsung – to offer a broader range of SDK’s to app developers, and App developers to offer ever more customisable apps for their smartphone, tablet and smart TV consumers.

Whilst we are currently experiencing the peak of hype for 3D printing, the potential for this remarkable sub-set of technologies is vast, and, perhaps as much as, or more than, other disruptive technologies, that potential is difficult to predict, because whilst oil and gas exploration has a set of variables that are based upon technology, those technologies are confined to fairly specific operational bounds and desired outcome scenarios. For 3D printing, almost any existing product sector could be disrupted, almost anyone can become involved, and almost any potential set of outcome scenarios may emerge, though confined to limiting variables that we will look at shortly.

The world is waking to a new, true third way of making: subtractive manufacturing, moulding, and now additive manufacturing — 3D printing. A way of making that empowers the user: not just the business owner and investor; not just the state that takes possession of its nation’s means of production. This could contribute towards lifting a proportion of the world’s poor from poverty via home and localised making, create middle-class wealth to increase purchase power in the wider economy, and facilitate existing large businesses via the many direct benefits that additive manufacturing can offer on an industrial manufacturing scale, plus the profits garnered from the wealth spent by a more affluent middle-class, and opportunities created by opensource via crowd-sourcing.

The Gartner report predicted worldwide shipments of sub-$100,000 3D printers grew 49% last year, reaching a total of 56,507 units. That rate of growth is forecast to rise to 75% in 2014, fuelling shipments of 98,065 units. It’s the first time Gartner has put together a forecast for the sub-$100,000 3D printer market so that’s something of a rite of passage for the technology too.

“The 3D printer market has reached its inflection point,” stated Pete Basiliere, research director at Gartner, in a statement late in 2013: “While still a nascent market, with hype outpacing the technical realities, the speed of development and rise in buyer interest are pressing hardware, software and service providers to offer easier-to-use tools and materials that produce consistently high-quality results. As the products rapidly mature, organisations will increasingly exploit 3D printing’s potential in their laboratory, product development and manufacturing operation. In the next 18 months, we foresee consumers moving from being curious about the technology to finding reasons to justify purchases as price points, applications and functionality become more attractive. Office superstore Staples is already in the market, and other superstores and consumer goods retailers, such as Yamada Denki, are prime candidates to sell printers and finished 3D printed items. Their presence in the market will have an impact on average selling prices, forcing providers into low-margin sales of consumer 3DP by 2017.”

Gartner noted that current enterprise uses of 3D technology focus on ‘one-off or small-run models for product design and industrial prototyping, jigs and fixtures used in manufacturing processes and mass customisation of finished goods.’ But as advances in 3D printers, scanners, design tools and materials reduce the cost and complexity of creating 3D printed items, it said applications of 3D printing technology will expand further such as ‘architecture, defence, medical products and jewellery design.’

The analyst expects 3D printers to have the biggest impact on industries, including consumer products, industrial and manufacturing, and a “medium impact” on construction, education, energy, government, medical products, military, retail, telecommunications, transportation and utilities. Low impact industries include banking and financial services and insurance.

According to research by Wohlers Associates growth of the low-cost (under $5,000) “personal” 3D printer market segment averaged a phenomenal 346% each year from 2008 through 2011. In 2012, the increase cooled significantly to an estimated 46.3%. Wohlers Associates believes the 3D printing industry will continue strong double-digit growth in forthcoming years, and the sale of 3D-printing products and services will approach $6 billion worldwide. By 2021, Wohlers Associates forecasts the industry to reach $10.8 billion.

It took the 3D printing industry 20 years to reach $1 billion in size. In five additional years, the industry generated its second $1 billion. It is expected to double again, to $4 billion, in 2015. This exponential growth rate is forecast to continue until at least 2025 by which time the industry will have reached up to $600 billion.

Regarding operating systems, Microsoft 8.1 is supporting 3D printing with its own file format, and Linux supports 3D printing API’s. Only Apple and Google have yet to show their hands regarding major computing platforms.

Honing trends to individuals markets or locations is data less readily available. But that is what we will look at in part two of this series ….