The Titan Arm — designed by four mechanical engineering students from the University of Pennsylvania — could help those who have severe back injuries regain control of muscles. Other applications include physical therapy, augmented strength for physically intensive occupations and unique high intensity strength scenarios such as search and rescue operations. 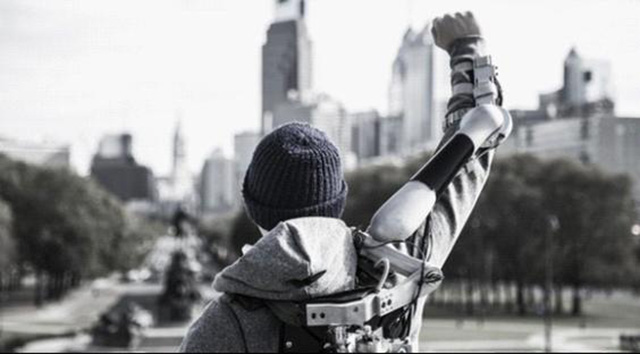 The Titan arm is an untethered, powered upper-body exoskeleton. The design brief observed that though systems exist, past exoskeleton endeavours have led to bulky, expensive, invasive and tethered solutions. The challenge has been to build an exoskeleton system that is inexpensive, streamlined and wireless.

The team, who spent eight months creating the exoskeleton, and recently won the James Dyson Award with their efforts, will share a prize of $48,000 (£30,000). “Current exoskeletons are prohibitively expensive at more than $100,000,” the team notes, “Using lean principles, we created Titan for less than $2,000.”

The students plan to refine their design with the prize money: 3D printing strategic parts, making the Titan Arm’s plans open source for the research and maker community. In time they aim to sell a commercial version for less than $10,000. 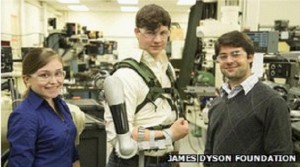 “Titan Arm is obviously an ingenious design, but the team’s use of modern, rapid – and relatively inexpensive – manufacturing techniques makes the project even more compelling,” said Sir James Dyson.

The team states that: ‘Our solution is unique in that it will be a low-cost, ergonomic device actuated through sensors measuring the user’s motion. Through onboard sensing, the skeleton can provide rich data, such as range of motion for use in physical therapy. This data can be used by doctors and patients to more accurately track improvement over time. With its low cost, hospitals could employ multiple devices and aid a larger audience of patients; the devices could even be used at home for physical therapy, which would dramatically increase quality of life for patients.’ 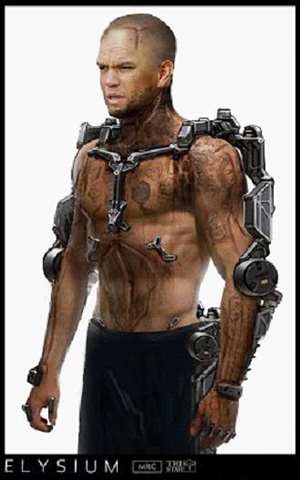 I can’t help but think of Elysium, a movie where, in the not too distant future the protagonist is endowed with a surgically fused exoskeleton to aid his mission to reach Elysium, a near Earth mammoth orbit space station where the world’s rich, the 1%, have chosen to live in technologically imbued bliss, leaving the 99% behind on Earth to suffer ecological and economic decay in a vastly overpopulated world. The movie is great, the concept art amazing. Exoskeletons in all kinds of high velocity action scenes.

Is this part of a transhumanist future?

The University of Tokyo’s equivalent to Titan Arm uses pneumatic artificial muscles (PAMs). These are akin to rubber bladders that contract when filled with air to imitate human muscles. The exoskeleton enables the lifting weights upward of 110 (50 kg). The team hopes to make their exoskeleton commercially available next year for under $200 a month.

A significant difference is that the suite is tethered, wherein the design departs from that of Titan Arm on a fundamental level. Here follows a video of their progress: