At the 3D PrintShow in London, Mcor Technologies was able to show off one of the most stunning benefits of 3D printing with paper. With designer Steven Ascensão’s 3D printed Mech-ganical Prosthetic Life Form, the paper headpiece demonstrated the huge range of colours possible with Mcor’s process. 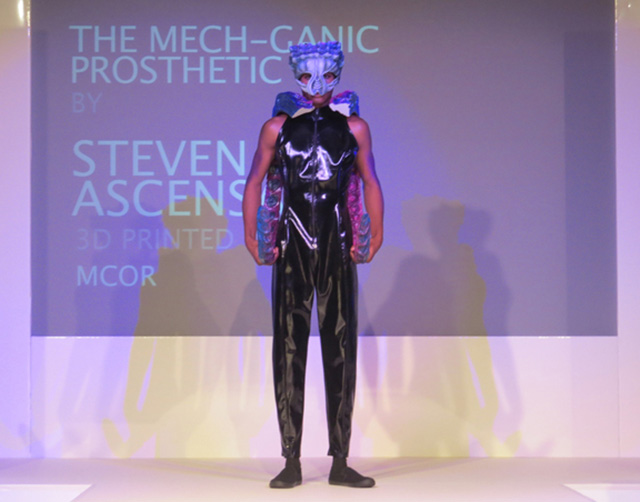 Printed using Mcor’s full-colour 3D printers, Steven Ascensão, a graduate of UCL’s architecture program employed with Fosters & Partners, created an eerily strange headdress for the 3D PrintShow’s VIP Catwalk. The piece merges the organic with the mechanical suggesting the symbiosis between the two, a sort of tribute to the singularity to come. Normally, I would pontificate on all of the possible meanings of the Prosthetic Life Form with pseudo-philosophical language, but Mcor’s Julie Reece has applied her own art critique that’s probably better than I could offer: 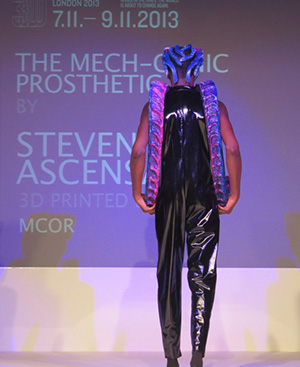 Succumbed under the influence of the prosthetic, the male body adopts a posture of resting his arms upon the looped horns, expressing a sense of surrender as he allows the prosthetic to surround his peripersonal space in an intimate fashion. The prosthetic has now become one with the male’s body.

The attitude of the prosthetic shows the organic life form abruptly penetrating through the machine coat, exerting its fragility. Each side abides by their own rules: the mechanical side shows a sense of systematic order, whilst the organic side demonstrates a sense of entanglement and life sprouting.

Ascensão’s design also features a glossed coating, which he found uniquely possible with the paper-based process, saying, “I was also fascinated by the ability to change the properties of an Mcor paper 3D printed model depending on the finishings used. For example, one can achieve a glossy, hardened look mimicking the appearance of marble, or make the model soft and flexible, like silicon.”

Aside from the full-colour capability of Mcor’s line, the prints are as recyclable as those Enron audit documents you’ve been shredding.  The company also argues that “Mcor’s part cost is between 5% and 20% of other technologies’ costs.”

Though I think that Ascensão’s piece is great looking as a throwback to pulp comics of the 50’s and am quite stunned with the colour and detail of the Mcor print, I’m not sure that it jives with my current fashion sense. Print me a top hat and a button down and then we’ll talk. [Ed: I’m ahead of you on the hat thing! Watch this space …. there are happenings afoot!]