ABS is, without a doubt, the most popular material used by professionals in FDM technology. Unfortunately, it is not perfect, hence the continuous search for thermoplastics that would be a fit where ABS has some weaknesses. One interesting alternative is ASA, which has less shrinkage and much higher resistance to weather conditions, leading it to be used successfully in the automotive industry. For the past year, it has also been used by Stratasys in its professional FDM systems. But, for the past couple of months, owners of low-cost 3D printers have also had the chance to try it out, thanks to UK company DR3D Filament. We had the privilege to test this alluring filament, and here are the results.

ASA (Acrylonitrile Styrene Acrylate) was created in the 70s by the chemical giant BASF, as an alternative to ABS, with increased resistance to weather conditions. It has exceptional strength and rigidity, high chemical resistance and thermal stability, and, above all, it ages very well and does not turn yellowish with time. Additionally, it has a high gloss.

Last year, ASA filament was introduced by Stratasys as one of the materials for use in FDM 3D printing. With all of the above mentioned properties and high UV resistance, models made from this material are suitable to be installed in vehicles, or any kind of outdoor installations. Recently, UK-based manufacturer of professional FDM materials DR3D Filament created their own line based on ASA, so that it might also be implemented by users of low-cost 3D printers.

At the moment, DR3D Filament’s ASA is available in 5 basic colors (black, white, blue, red and natural) and 1.75mm diameter. The filament is sold in spools of 1 kg at the price of £35 and is printed with similar settings as ordinary ABS. Courtesy of the manufacturer, we had the opportunity to test out one spool of ASA in natural color.

Given the material properties, i.e., good resistance to external conditions, we decided to 3D print something that would be put outdoors to observe its aging in the following weeks (months, years, decades… if we will live for so long ;-). In that case, a model of a garden gnome was an obvious choice.

The 3D print was made on a 3DGence One 3D printer. As it was one of our very first 3D prints on this machine, we did not realize the power of its two cooling fans. In the first attempt, although we set cooling at 45% of power, it turned out that 3D printing the dwarf with ASA and such cooling power was too much. The poor man was cold, shrank into himself, and cracked. We later lowered the cooling to 10% of fans power, and the result was brilliant. Conclusion: ASA doesn’t like when it’s windy.

In the meantime, we tried a complete shutdown of the cooling system on the popular 3DBenchy model, but the results demonstrated that is also not a good option.

The second attempt in 3D printing the dwarf with cooling set at 10% ended with very nice results.

The settings we used were as follows: layer height of 0.2 mm, nozzle temperature of 245°C, bed temperature of 115°C on the first layer and 110°C on the following layers. A high temperature table is necessary to ensure a good grip on the ASA, like the  ceramic print bed with which 3DGence is equipped.

Another test was to check the shrinkage of material. This time, the tests were performed on 3DGence One and Zortrax M200 3D printers. We designed a big, industrial-like model with dimensions of 5 x 18 x 8 cm and quite solid geometry. The model 3D printed on the Zortrax machine was made with the following settings: Z-HIPS, a layer height of 0.19 mm, and no cooling at all. At the beginning, everything looked very promising, but, unfortunately the higher the model was built, it began to shrink and deform. As a result, the model’s geometry strongly deviates from the target.

When 3D printing the same model on 3DGence One, the geometry was preserved and only one tiny crack was visible. However, problems arose when peeling the model from the bed. Although it came away without any significant force, at the same time it took part of the ceramic table with it! In addition, it was revealed that the printed model descended slightly downwards (expanded base model). All of this was caused by way too high of bed temperature, set at 110°C, and the fact that we covered it with glue. Lowering it to 80-90°C wouldn’t hurt the 3D printing process, and at the same time saved the model’s geometry and the bed’s surface.

Another model 3D printed in the same configuration, was a small rotor. We had already such a model 3D printed on an Objet using PolyJet technology, so we were curious if any of our FDM 3D printers would be able to 3D print this difficult geometry.

This time, both 3D prints were similar, except for the… supports. Thanks to quality of Zortrax’s software, the supports were removed quite cleanly (even though they were very difficult to remove), while, on the 3DGence One, support removal was hopeless. We used RepetierHost software with the Slic3r engine, and it failed completely. Apart from that, the top surfaces and geometries were fine in both cases. Perhaps choosing a different slicing engine (e.g. Cura), would help – we will definitely check this out in the near future.

Other ASA models we have made were decorative – a vase and a lotus flower. Both came out nicely and properly. 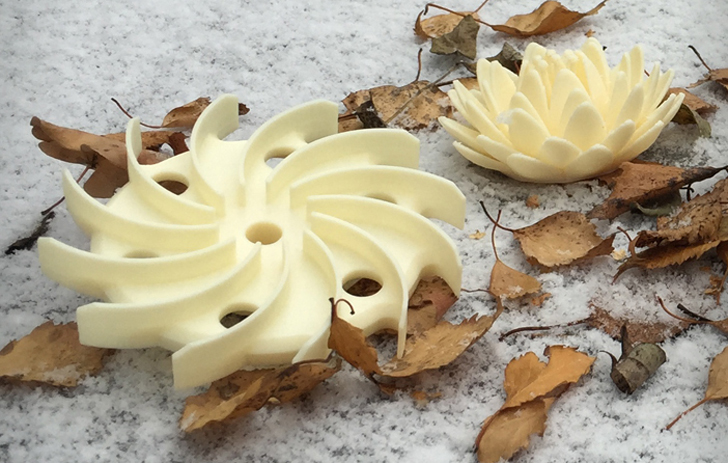 In conclusion we see great potential in ASA. The shrinkage of this material is more or less at the level of ABS, but the surface of models 3D printed with ASA has, however, due to a high gloss, very different character than the ones 3D printed with ABS. And, as far as the famous weather resistance is concerned, our gnome will be testing this feature for months to come…