Sued and Sacked: Has The 3D Printing IP Storm Begun?

Respecting Intellectual Property (IP), whether traditional, Creative Commons, open source or otherwise, is important. For one thing, people who create often make little money. There is a cruel irony that music, photography and art are some of the most illegally ‘shared’ properties. Using other people’s artwork without even a nod to the originator who put the work into it and needs to earn a living has become habitual for many people. That 3D printable designs are now a target is unsurprising. But we have a chance to address this early…

The main outcry you will read is that large companies will soon be fighting battles for Intellectual Property to the order of billions of dollars with the common man via desktop 3D printing. When they do fight that battle, they are in the moral and legal right. But also, Mike recently showed that the other direction of movement of Intellectual Property, from 3D designers to large companies without payment or accreditation is also already happening.

Both of these infringements are clearly wrong. There was a storm spreading across the home 3D printing social media groups late last week and over the weekend regarding MakerBot and a number of patents they have filed that makers allege were copied from their concepts. I do not know the truth in these matters. I only see that the 3D printing patent issue is now truly upon us. Albeit the early stages, but significant enough to be causing people distress.

When is crowd sourcing stealing ideas? When is using amateur open source designs without attribution a court case in waiting? When do 3D printables designers who witness other designs which consist of elements of their design, but not the entirety, have sufficient grounds to complain or bring actions against the apparent copy, when there may well be a mere coincidence that two or more designers have incepted the same innovations without prior contact or awareness of each other’s projects?

These and many more questions will receive increasingly firm answers in laws across numerous jurisdictions as the world of desktop 3D printing and its related phenomena evolve. Today, I’m going to be sharing one of the first ‘3DP designer verse 3DP designer’ cases. The case resulted in a payment, and the loss of employment for one of the people involved in the infringement. 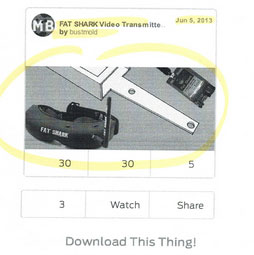 Late 2013 Michael Golubev engaged in many hours studiously learning computer aided design programs such as SketchUp and SolidWorks to create various three-dimensional designs. He later published a number of these designs on Stratasys-owned Thingiverse under the username BustMold. These designs included the ‘DJI Phantom,’ a remote-controlled quadcopter (helicopter) that soon becamepopular. Indeed the design became so popular that a hobbyist’s leisure passion became a business — 3Dprintler.

A number of months later it was brought to Michael‘s attention that the designs were being sold as physical objects in the form of parts by CanadaDrones.com and other hobby stores. Upon contacting him, the owner articulated that he had acquired the filesvia a Sales Manager of the Mississauga-based company Anubis 3D. The Sales Manager had assured the owner of CanadaDrones that Anubis was workingwith the designer of the parts. A court case was born.

Here is a brief from the Plaintiff’s Form with the Superior Court of Justice:

On June 5, 2013, Michael Golubev published his upgrade for an aerial r/c drone under the “Creative Commons – Attribution – Non-Commercial Use” on Thingiverse (http://www.thingiverse.com/thing:99048), a free website for sharing 3D models.Anubiscorp, a 3D-printing company located in Mississauga, Ontario, is now engaging in a practice of acquiring these free 3D files (STLs) from the “Creative Commons – Attribution – Non-Commercial Use” on Thingiverse and selling them to r/c stores and individuals alike for monetary gain, thus breaking the licence use and infringing on the intellectual property of the original owners.A number of Mr. Golubev’s 3D models, all of which are listed on Thingiverse, were sold by Kevin Scanlan from Anubiscorp to a number of r/c stores, including CanadaDrones.com—owned by Danny Thivierge. Mr. Thivierge was cooperative and explained that he received the parts from Anubiscorp and that the company claimed to be the original designer of the files.’

Mr. Golubev is now seeking damages accrued as a result of the IP infringement of his 3D models. He would like to highlight the fact that his designs were explicitly listed under the “non-commercial use” section of Thingiverse, and so, their sale by Anubiscorp is clearly illegal, not to mention unethical.3D printing is an emerging technology that is changing business models all around the world, but we have to stand up for the intellectual property and rights of the designers.After all the paperwork was filed at the courthouse, the next step was to serve the papers to all the defendants (Scanlan, Thivierge and Anubis) and wait for further developments.’

The solicitors acting on behalf of Anubis Manufacturing Consultants Corp. and 3Dprintler came to a mutualagreement. The settlement made had the following conditions:

A settlement was made, a cheque written and the career of Mr. Scanlab at Anubis is no more. This is serious business. Will the business of 3D printing put serious business in the direction of solicitors in the future? That’s possibly going to depend upon how soon the companies in the 3D printing industry, large and small, and the many makers, amateur and professional designers, salespersons, marketeers, and everyone else engaging in this fascinating phenomena that has gained worldwide attention make a combined decision to show how many types of interest can reach an equilibrium of good will.

Whether a marketing professional of a five billion dollar corporation or a student learning computer aided design, whether a hobbyist open source desktop 3D printer owner or an entrepreneur seeking growth for their closed source 3D printables marketplace, in the US or Russia, Rwanda or Congo, there is a chance to reach an early common understanding that no matter what the interest of the company or individual in 3D printing, piracy is wrong.

Heck, there are between 100,000 – 200,000 FREE designs out there to 3D print already. If we can’t all sit back and say – wow, that’s something pretty special in itself, we are so lucky to have so much combined good will that people are willing to take the time and take that risk to put free designs out there. It’s not ABOUT the free designs – there are numerous ways to make money and make a business out of 3D printing, but those free designs are indicative of a fairly unusual good will and hopefulness about 3D printing that is special.

How sad will it be five years from now if the willingness to put free designs online – whether to forward the evolution of desktop 3D printers, simple enjoyment in sharing, a hook to a designs brand, or whatever else, have all but vanished in a wave of caution and cynicism because people just weren’t willing to respect each other’s work, time and willingness?

There are still many people writing about how 3D printing in the home and industry is the pre-empt to the Star Trek replicator, or a world without scarcity, or a utopia. I’ve indulged in those dreams in my time writing about 3D printing. More than I should have done, I think. I don’t see any of those things coming about because of 3D printing from a realistic perspective. But I do see fantastic advances in industry over the next few decades, some great new technologies for the home, and a community that really is in love with the technology and has a maker spirit.

What with cases like this, Nervous System’s and Dizingof’s tribulations, the new apparent MakerBot patent controversy (whatever truths may lay behind the rumours), we have a chance to take stock, reflect, amend behaviours and maintain that good will. It’s good for making, good for the community, good for the industry and good for business.

Or, 3D printing could become more about guns, law, patents and pirating more than bioprinting organs to save lives, scanning on one planet to 3D print on another, medical instrument advancements and educational innovation in the class room. It’s up to us.

Whatever my words, I’m just some guy writing about 3D printing. I have little to no real influence. I’m an idealist more than a realist. But these are my thoughts. I’ll leave you with the thoughts of the victims turned victors of this study case. For their words are surely pertinent…

’In the end, all this is to say that intellectual property (IP) infringement cases will become more and more common, even inevitable, in the years to come.Luckily, companies like Authentise and Secured3D are well on their way to creating possible solutions to this massive digital copyright issue. And needless to say, we here at 3Dprintler are excited to implement them on our website and other platforms and apps in the near future.Until then, the 3Dprintler v.s. Anubis Corp; Kevin Scanlan, Dany Thivierge case can serve as the precedent and foundation for future digital IP infringement cases. Designers, creators, tinkerers and geeks everywhere should feel empowered to stand up to illegal distribution of their content whenever possible.