Styrolution’s Plastics Panel Sums the Future Up in One Word: Plastics

Imagine a room where people gather to talk plastics: magic, malleable but strong, materials for shaping anything you can think of. People discussing the polymer age. People determing the future of the objects that make up our environment. You might be picturing something like “The Future of Plastics and the Role of Styrenics”, a panel hosted by Styrolution earlier this year.

Styrolution, if you’re unfamiliar with it, is a joint venture between the largest chemical company in the world, BASF SE, and the fourth largest chemical company in the world, INEOS, that merges the styrenics divisions of both companies[1].  Styrenics, if you’re not keen on the lingo, is the broad and ubiquitous category for polymers under which you’ll find ABS, among other things. In other words, Styrolution plays a major role in your everyday life by manufacturing the chemicals that make up your world.  So, a panel discussing the future of plastics hosted by Styrolution could very well determine the future of plastics. 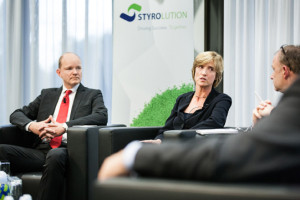 The panel was made up of a five different experts in the field of plastics: Volkswagen’s Head of Material Technology, Eckart Herrmann; Patricia Vangheluwe, Director of Consumer & Environment Affairs at PlasticsEurope; journalist Robert Matthews; head of the department for Macromolecular Chemistry at the University of Bayreuth, Dr. Hans-Werner Schmidt; and Dr. Norbert Niessner, Global Head of Research and Development, Styrolution. What did the panel come up with? Well, for one, that we’re living in the Polymer Age, which has just begun, and that styrenics are an important class of polymer. But what plastics aficionado didn’t already know that? More interesting was the point made by PlasticsEurope’s Vangheluwe, who pointed out the environmental impact of plastic waste in the world. What made her ecological plea unique was that she underlined the value of discarded plastic. To throw away such a useful material, seen incorporated into so much of the industrial world, is like throwing away gold. The panel also discussed the importance that plastic would have in 3D printing.

Dr. Hans-Werner Schmidt, of the University of Bayreuth, saw that 3D printing with styrene polymers would be essential for giving the public direct contact with the power of plastics.  Norbert Niessner, of Styrolution, explained that 3D printing would be impacted by the polymer in that “styrenics will play a major role by making high-end tech affordable to people throughout the world.”  Volkswagen’s rep, meanwhile, focused on the use of 3D printing in prototyping.

[1] If you’re interested in learning more about both companies and their joint venture, Wikipedia gives a good outline of their histories, but don’t look too far into the past of BASF. You might not like what you see.