Lockheed Martin has developed a robot SPIDER to crawl around the vast surface of its hybrid airships and test for pinhole leaks that could spell disaster when these massive hybrid vehicles take the sky.

The Self-Propelled Instrument for Damage Evaluation and Repair comes from the company’s Skunk Works division that works on special projects. That part of the company also brought us the Helium-filled hybrid blimps that have now been revealed to the world and embraced by the customers.

First 12 ordered and close to ready

Lockheed Martin received an order for 12 of these blimps that can transport 19 people and more than 22 tons of cargo to remote areas. It has worked on the concept for more than 20 years, the first demonstrator took to the sky eight years ago and the aerospace giant has integrated 3D printing into a lot of its processes.

The first deal is worth $480 million and Lockheed Martin simply has to make sure these airships are safe. History has simply never forgotten the Hindenburg disaster in 1937 when a German airship caught fire and went down when it tried to dock with a mooring station at the Naval Air Station Lakehurst in New Jersey.

We’ve come a long way since then in terms of safety and technology. But it’s imperative that these airships work faultlessly if Lockheed Martin’s faith in these helium-filled airships is going to be reciprocated by the world at large. It wouldn’t take much for the critics to sharpen their claws. 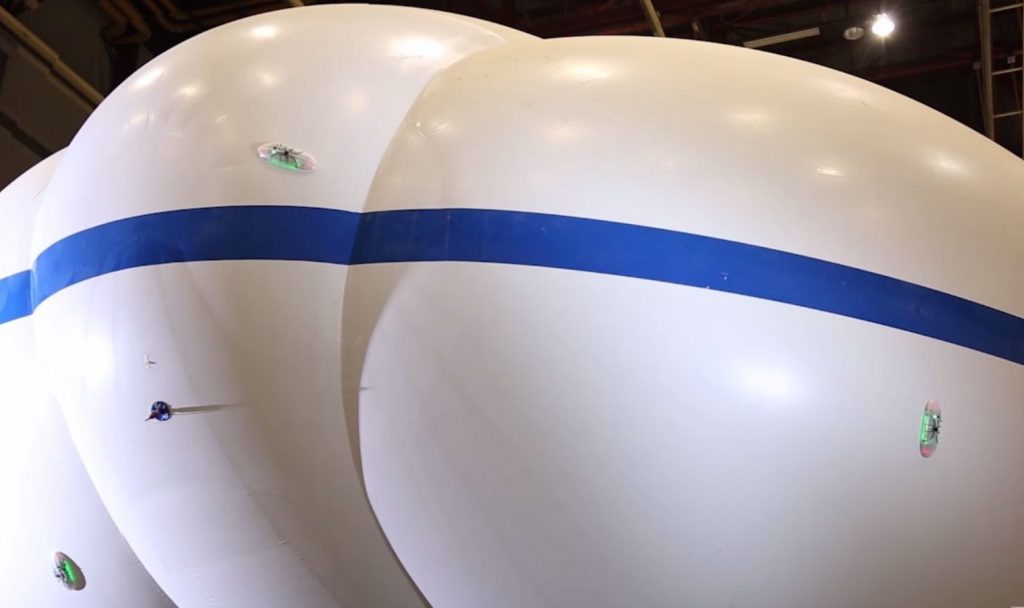 SPIDERs held together with magnets

The SPIDERs, which were built from off the shelf components, are just one part of the process. Essentially they are made of two pieces that attach magnetically on either side of the envelope fabric. The outer part of the SPIDER shines a light on to the fabric that is detected by sensors on the inner part. When the robot detects a hole then a repair mechanism is brought into play and the robot patches it with an integrated device that works in a similar way to a label maker.

It sends a full report to a main computer and any weak area will get flagged up for human inspection, but it’s a remarkably efficient way to conduct a complete search of such 80,000 square foot of material on each airship.

SPIDERs will work in teams

The aerospace company expects a team of five or six SPIDERs to examine and patch a full airship in less than five days, whereas a human inspection could take 10 days and simply couldn’t happen alongside production. The SPIDERs can easily be put to work during the final assembly or routine maintenance checks.

There’s no real way that the human eye could do a better job, even though that is the way it was done in the pre-robot era. The envelope would be partially deflated, a team of workers would systematically shine a light on the fabric and then they would patch up any holes they could see. Pinholes can be hard to detect this way, though, and they can have a huge impact on the airship’s overall efficiency.

Helium is a small molecule and although the fabric itself is woven tight enough to retain it, but pinholes can create an escape point and that can cause problems. With the hard-working SPIDERS checking each and every envelope, that’s much less likely to happen.