Smarttech has upgraded its scan3D line-up in response to requests from the medical and security sectors.

The portable scanner can now digitise the entire human body, which has important applications for doctors, researchers and even law enforcement and immigration officers.

A scanner with medicine in mind

The Polish company created the new scanner specifically for the medical profession and it allows for accurate measurement of body parts, posture, wounds and even deviations in the skin. It uses white light, integrates up to five different units of measurement in the integrated software and it scans in colour too.

Add to that face that this scanner is portable, as it measures just 43x11x22cm, and it doesn’t need calibrating, it could become a potent weapon in the field. Doctors and nurses in far flung corners of the globe are currently using photos and Skype links to share injuries and other problems with their home hospitals.

A full scan offers a much better tool for diagnosis and can save lives on its own. Repeated scans can also show a patient’s progress when it comes to wound healing and posture correction.

A new arm of prosthetics

That’s just the start, too. 3D scanning is taking the world of prosthetic medicine to new heights as patients can be fitted perfectly for a prosthetic arm or leg first time, every time. A team could take this scanner to the poorest parts of the Sudan, or Syria, and measure a huge number of amputees for prosthetic limbs that can be produced cheaply with a 3D printer and delivered within days. 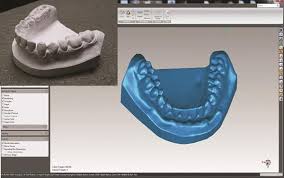 Dentists, meanwhile, could take a physical mould of a patient’s mouth and then digitise it instantly. There’s no need to send a physical product off to the lab and with Smarttech’s precise measurements then replacement teeth, bridges and guards can be produced much faster as the postal service is removed from the equation.

Complex shape analysis also has medical applications, but this could also make it a potent tool when it comes to immigration and security. Police could take a 3D scan of a person, together with a photograph, to make it easier to build a database that can be used in the future to apprehend criminals from enhanced CCTV footage.

Immigration officers could even scan every visitor to the country at some point in the future, which will give an additional layer of protection for American citizens.

The Smarttech scanner has a huge number of uses and could be a serious asset to every hospital, dentist, doctor and security company in the land. So have a look and see what you think, this could be the scanner you’ve been looking for.